The Indian media speculated endlessly on the possibility of a bilateral meeting between Mr Modi and the Pakistani and Chinese leaders. 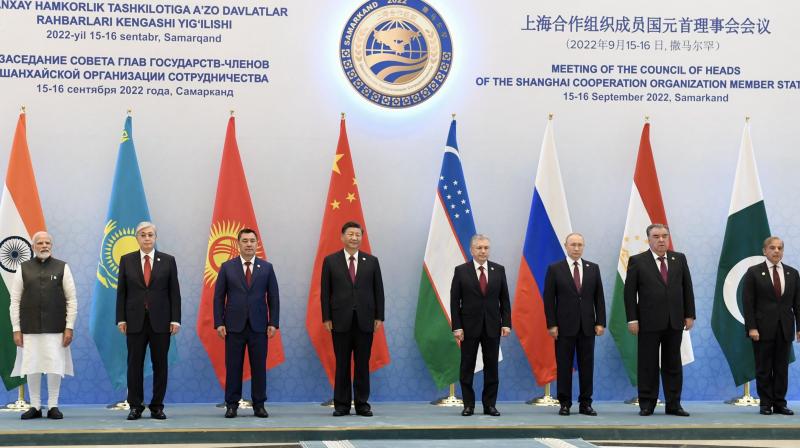 The Shanghai Cooperation Organisation recent summit in Samarkand last week -- the 22nd meeting of its council of heads of state of eight member nations and some observer states – drew much global attention as it was the first large summit-level gathering in the post-Covid era, and was being held in the background of the Ukraine-Russia conflict and US-China tensions.

The leaders of all eight member states and several observer states and special invitees attended, among them President Ebrahim Raisi of Iran and President Recep Tayyip Erdogan of Turkey. The summit brought Prime Minister Narendra Modi face to face with China’s President Xi Jinping and Pakistan Prime Minister Shehbaz Sharif in one room for several events.

The Indian media speculated endlessly on the possibility of a bilateral meeting between Mr Modi and the Pakistani and Chinese leaders. There was no such meeting in the end. Mr Modi scheduled his arrival in Samarkand for late evening of September 15 and avoided attending the pre-summit banquet and other pre-summit collective events. The PM’s tour programmes and meetings are planned with considerable thought and it was speculated in the media that Mr Modi intentionally skipped the banquet to avoid sharing space with Mr Xi at a social event.

Mr Modi held a significant bilateral meeting President Vladimir Putin of Russia where the Ukraine situation was discussed. In his remarks for the media before the closed meeting, Mr Modi pointedly told President Putin that “it is not an era of war”, and that talks “will get us an opportunity to talk about how can we progress on the path of peace”. President Putin acknowledged India’s “concerns” and complained that “Ukraine is not coming to the negotiating table”. The PM also rightly pointed to the food, fertiliser and fuel security concerns of the developing world.

The Modi-Putin meeting was very well scripted by both South Block and the Kremlin. India’s concerns on Russia’s actions in Ukraine had earlier been privately conveyed to Moscow at various levels, but this time were articulated publicly. Mr Putin was well prepared and responded from his written notes. The principled position taken by Mr Modi was widely reported in the Western media.

The other significant bilateral meet of Mr Modi was with Turkey’s hard-liner President Recep Tayyip Erdogan. Under his leadership, Turkey is gradually moving away from the path of secularism and positioning itself as a leader of the Islamic world. The Turkish President has spoken at the UNGA against India’s constitutional changes in Kashmir in August 2019 and has consistently supported Pakistan in the Financial Action Task Force against terror funding. The meeting was at Turkey’s request. That country has emerged as a key mediator in the Ukraine-Russia conflict and was instrumental in finalising the UN-supervised process for export of Ukrainian and Russian grain from the Black Sea ports.

In an article published in the global media before the summit, its host, Uzbek President Shavkat Mirziyoyev, had set out his objectives as SCO’s chair. Two major issues where a collective regional view is important were the approach towards the Taliban regime in Afghanistan and the connectivity of Central Asia’s landlocked republics. The closed session discussions would have focused on these vital issues.

Recognising Afghanistan as an “integral part of the larger SCO space”, the Uzbek President noted that “Afghan people need good neighbours”. Uzbekistan has already established regular contacts at all levels with the Taliban regime. Uzbekistan believes the Taliban are here to stay in Kabul and that the neighbouring countries should deal with them to the extent possible. The “Samarkand Declaration” reiterates it is “critical to have an inclusive government in Afghanistan with representatives from all ethnic, religious and political groups”.

On regional connectivity, Mr Modi significantly noted “this is possible only if members grant each other full transit rights”. This was directed towards Pakistan’s obduracy in denying India’s trucks transit towards Afghanistan and Central Asia.

Interestingly, in his remarks, the Pakistan PM responded by saying that “if there is connectivity, transit rights will automatically come”. This comment needs further exploration and analysis for any practical outcome.

As expected, Mr Modi also raised the issue of terrorism at the closed session.

The member countries agreed to prepare a consolidated list of terrorist entities and individuals in their respective countries. But not much is expected as Pakistan continues to harbour terrorist outfits and China continues to shield them in the Al Qaeda Sanctions Committee of the UNSC.

Notably, there was no reference to the Ukraine conflict or “One-China” policy in the Samarkand Declaration.

The SCO has a quasi-defence character as regular joint military counter-terrorism exercises are held as “peace missions”. In his address, China’s President Xi offered to set up a regional counter-terrorism training centre in China to train 2,000 police officers from SCO member states. This is an attempt by China to establish direct links with the internal security establishments of member countries and must be studied with caution.

At Samarkand, India took over the chairmanship baton from Uzbekistan and the next SCO summit is likely to be held in the second half of 2023. The level of participation by both China and Pakistan at the New Delhi summit would depend on the level of our bilateral relations with these two difficult neighbours at that time.

The Samarkand summit saw an impressive display of traditional Uzbek hospitality but its actual outcome was rather modest. There is little that India can do as SCO’s incoming chair to move the outfit to meaningful action and away from the present cascade of meetings and platitudes.