Sanjeev Ahluwalia | Cheetahs back: Will it take India into happier future? 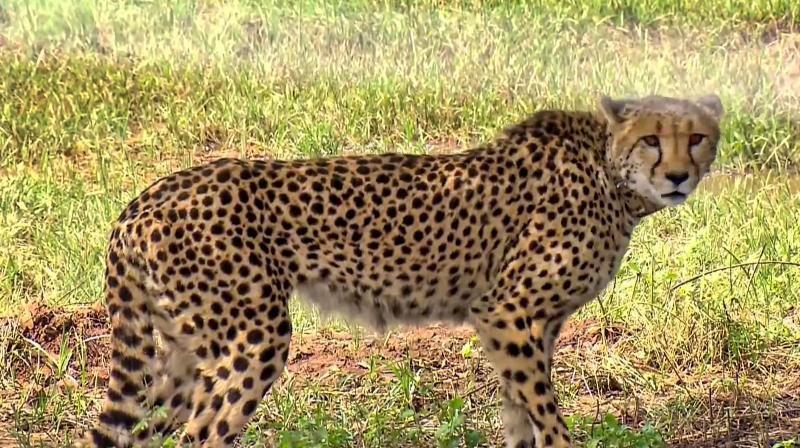 A cheetah after being released inside a special enclosure of the Kuno National Park in Madhya Pradesh, Saturday, Sept. 17, 2022. (PTI Photo)

The import of cheetahs from Namibia to diversify the fauna in our national parks, seven decades since the cheetah became extinct in India in 1952, is a tiny reminder of the many benefits of linking ever closer with Africa -- the last frontier of abundant natural resources with the highest potential for future growth.

This is not the first time that the introduction of big cats -- of which the feline cheetah is the smallest and the fastest -- has been attempted in this region. In colonial times, the erstwhile Maharajah of Gwalior, within whose lands the Kuno area lies, tried to inject lions from Junagadh -- a principality in Gujarat ruled by the then Nawab. But then, as indeed now, the rulers of Gujarat were disinclined to export their lions to other Indian states, possibly believing in the sound economic dictum that any artificial scarcity leads to higher prices.

The British were much more generous, albeit with other people’s possessions. They produced a win-win proposition. They persuaded the Emperor of Ethiopia, who clearly had more lions than he needed -- accompanied as he was on his perambulations around the palace by lions and surrounded by them whilst he sat on his throne in Addis Ababa -- to gift some to the distraught Maharajah of Gwalior. Sadly, and possibly because the Maharajah liked what he saw on their arrival, the lions never reached Kuno and were released into the forests around leafy Shivpuri, 120 km west of Kuno, where they were poached and exterminated over time.

Not necessarily. Kuno has an 782 sq km area free of human habitation, within which small, fenced areas totalling 7 sq km have been prepared for acclimatising the cheetahs to Indian conditions, with a sequenced release into the wilds once they are considered ready.

Compared to the free-range type of nature reserves in India, examples abound globally of curated and managed transplants of wildlife into less-than-ideal habitats. In South Africa, big cats are often best viewed in completely enclosed and gated private parks for a fee. This is one way out to manage the pressure on land for human habitation and yet preserve wilderness close by. The Nairobi National Park in Kenya has existed since 1945. A compact 117 sq km of nature preserve, squashed between the city and its airport, but teaming with wildlife.

This columnist has been privileged to watch a cheetah chase and knock the back legs out from under a gazelle, minutes into a late afternoon game drive. Of course, there are financial costs to making nature so accessible. The entire park is bounded on three sides by an electric fence and on the fourth by a river which affords the only access point to animals beyond the park area and hence can be regulated closely.

For those who may prefer to term such innovative attempts to preserve nature in close proximity to humans as artificial as an open zoo, think how artificial our own life has become. We cannot do without an air- conditioner to sleep soundly, snuggled under a coverlet at the height of summer, eat apples in summer or fish in months with no “R” in it or work through the night and sleep during the day. Admittedly, keeping wild habitats alive in a petri dish is not the best alternative. But it does provide a way of navigating the man versus animal conflict that have undermined such nature preserves.

Reportedly, the locals are excited at the prospect of wildlife tourism picking up in sleepy Kuno. If the high-profile cheetahs can generate decent jobs and result in the national park rivalling the facilities and the wildlife diversity offered internationally and better preserve the existing fauna, it would be worth the effort.

Unfavourable comparisons will be drawn between the high-cost, soft-landing being prepared for the imported cheetahs, versus the plight of India’s poorest, the miserable conditions in which indigent, recent immigrants to large cities scrape together an existence by squatting on public land devoid of public services or the state of cattle abandoned by their owners once past the milking age. The best defence -- a poor one nevertheless -- is that India is a land of extreme duality and we have learnt to live within our own karma.

At a more general level, the preservation of wildlife is closely associated with the preservation of carbon absorbing flora. Both are part of the ecosystem designed by nature to survive. Till recently it was thought that humans with their extra-powerful brain capacity have acquired the physical and financial capacity to live independent of nature. The ravages of climate change, a direct outcome of a human induced imbalance in nature, now illustrate that the consequences of declaring independence from nature are extremely dire.

More fundamentally, we must reinvent our world to live sustainably. Human habitats should spread vertically, not horizontally. Horizontal spread should be reserved for natural habitats -- forests, grass lands, river systems with their natural flood plains, ponds and lakes, plantations, and farms. Today our rural areas are overpopulated because urban jobs are unavailable and the surplus workforce -- particularly educated and smart women -- are wasted in low-skill housekeeping, childcare, basic livelihoods, or intermittent agricultural work.

Over time, the rural population will reduce as productive jobs and better public facilities draw families into urban areas. Already, the share of the population living in urban areas and per capita income is highly correlated across Indian states. As humans vacate villages, they will make space for the true inheritors of the wilds. The need to decarbonize the economy will also push us to restore the wilds and reduce our footprint on nature. The cheetahs are just one step towards those happy times.