When Ambika Soni unfurled national flag at the AICC HQ on Aug 15 in place of Sonia Gandhi who is down with Covid, it led to speculation 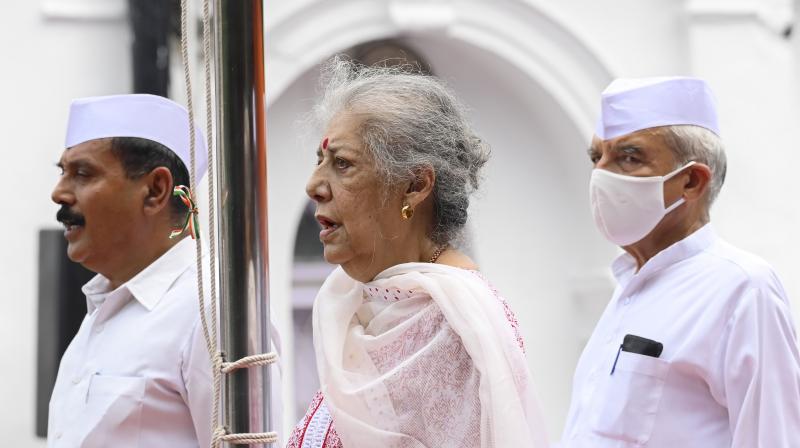 Congress leaders Ambika Soni, Pawan Bansal and others during the party's ceremony for the hoisting of the National Flag on the occasion of 76th Independence Day. (Photo: PTI)

The reconstitution of the Bharatiya Janata Party’s Central Parliamentary Board has predictably set tongues wagging about the political future of Union minister and former party president Nitin Gadkari who has been dropped from the highest decision-making body. Going into an overdrive, the Capital’s grapevine is now predicting that Mr Gadkari could be denied a ticket in the 2024 general election. Even before his exclusion from the Parliamentary Board, there had been murmurs in the BJP that the party leadership was scouting around for a suitable candidate to replace Mr Gadkari in the Nagpur Lok Sabha constituency. Mr Gadkari is known for his proximity to the Nagpur-headquartered Rashtriya Swayamsevak Sangh but the BJP has sent out a message to its ideological mentor with this latest development that the party leadership cannot be pushed around beyond a point. The new-look Parliamentary Board clearly has Prime Minister Narendra Modi and home minister Amit Shah’s imprint. With the exception of defence minister Rajnath Singh, no one from the Advani-Vajpayee era finds a place on this panel. In fact, it is perhaps the first time that a former BJP president will not be a member of this all-important party body.

First it was Mukhtar Abbas Naqvi and now it is the turn of Shahnawaz Hussain to be sidelined by the party. Mr Hussain was dropped from the party’s Central election committee which was also rejigged last week along with the Central Parliamentary Board. With the BJP making it obvious that there is no place for minorities in its ranks, its Muslim leaders have been effectively silenced. Kerala governor Arif Mohammed Khan, a lateral entrant to the BJP, is not known to shy away from commenting on key developments but he has been unusually quiet on the Gujarat government’s controversial decision to release 11 rape and murder convicts in the Bilkis Bano case.  A vocal advocate of Muslim women’s rights, Mr Khan had quit the Rajiv Gandhi Cabinet in 1986 in protest against the government’s move to reverse the Supreme Court order giving alimony to Shah Bano, a divorced Muslim woman. Today, Mr Khan is working hard to secure his place in the party by taking on Pinarayi Vijayan’s government in Kerala. He recently refused to give his assent to 11 ordinances promulgated by the government, has withheld the Kerala Cooperative Societies (Amendment) Bill and stayed the appointment of the new vice-chancellor of Kannur University.

The inclusion of Iqbal Singh Lalpura  ( the first Sikh face) in the Bharatiya Janata Party’s Central Parliamentary Board is in line with the party’s attempts  to build its own base in Punjab after its longstanding ally, the Shiromani Akali Dal, snapped ties with it. This appointment follows the move by the Delhi Sikh Gurdwara Management Committee to set up an office in Amritsar. Now aligned with the BJP, the Delhi Sikh body is running its separate campaigns against conversions to counter the Akali Dal-controlled, Amritsar-based Shiromani Gurdwara Prabandhak Committee, which manages Sikh shrines in Punjab, Haryana and Himachal Pradesh and Chandigarh. Punjab is one state which has not been enamored by the BJP or Prime Minister Narendra Modi’s charisma. The Sikhs have traditionally been suspicious of the RSS and the BJP which, they believe, want to deny them their distinct religious identity and treat them as members of the extended Hindu community. The BJP wants to win over the Sikhs by making inroads in the SGPC when its elections are held in November.

When senior Congress leader Ambika Soni unfurled the national flag at the AICC headquarters on August 15 in place of party president Sonia Gandhi who is down with Covid, it naturally led to considerable speculation. This was seen as a clear signal that Ms Soni’s position in the party’s pecking order has improved. She had earlier lost out to Ahmed Patel, Sonia Gandhi’s all-powerful late political secretary but has obviously bounced back after Patel’s death. Her name has now been added to the list of possible contenders for the party president’s post for which elections are due next month. The other names doing the rounds are Ashok Gehlot, Sushil Kumar Shinde and Mallikarjun Kharge though it is unlikely that anyone from outside the Gandhi family will be considered for the job.

The Bihar unit of the Congress is upset that it managed to get only two ministerial berths in the new government. According to party insiders, chief minister and Janata Dal (United) head Nitish Kumar was miffed with the Congress as it chose to hand over its letter of support to Rashtriya Janata Dal leader Tejashwi Yadav and not to him. This was despite the fact that he was the first to call up Congress president Sonia Gandhi for the party’s support after he broke off with the BJP. A furious blame game is on in the Congress with state leaders blaming Bhakta Charan Das, the party’s Bihar in charge, for this faux pas. On his part, Mr Das is trying to placate state leaders, saying the Congress has been promised one more ministerial berth after the alliance partners in the Bihar government firm up a common minimum programme.