Mr Putin’s resurrection of an agreement that has been lost in the fog of history has led to considerable discussion in the regional media. 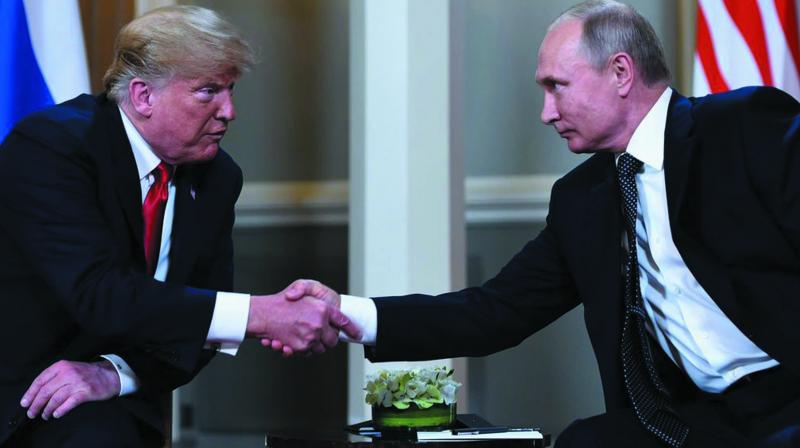 In the run-up to the July 16 Helsinki summit, the media in both the United States and in West Asia had felt that this high-level engagement would focus on regional matters, particularly relating to three countries — Iran, Israel and Syria. In the background of Mr Trump’s aggressive posture against Iran and his strong pro-Israel positions, it was speculated that the US President would specifically demand Russian support to get Iran out of Syria.

Affirming Russian President Vladimir Putin’s central position in West Asian affairs, Israeli Prime Minister Benjamin Netanyahu and Ali Akbar Velayati, foreign affairs adviser to Iran’s supreme leader Ali Khamenei, had reached Moscow on July 9. Mr Netanyahu, on his third visit to Moscow this year, is reported to have offered his backing for Bashar al-Assad remaining in power in Damascus in return for the full withdrawal of Iranian forces from Syria. More immediately, he accepted the entry of Syrian government troops into the south, provided that non-Syrian troops were kept about 80 km from the Israeli border.

It appears that while Mr Putin showed no interest in forcing the Iranians out of Syria, the cordon sanitaire that Israel wanted in the south has been implemented successfully and the Syrian forces are moving forward to cleanse the region of all rebel elements.

Mr Velayati had a broader and more complex agenda. He needed expressions of robust Russian support for the Iranian economy, following the reimposition of US sanctions. Anticipating American hostility to Iran’s (and Hezbollah’s) military presence in Syria, Mr Velayati also highlighted the US’ “selfish and illegal behaviour” and the fact that the US would be an “unreliable partner” in any set of circumstances.

Mr Velayati appears to have obtained the economic support he had wanted: he announced Russia would be investing $50 billion in Iran’s oil and gas sector, which was confirmed by Russian officials. He added that Mr Putin would be visiting Iran to take forward the Syrian peace process. The Russian energy minister has said Russia would accept “oil-for-goods” arrangements with Iran in terms of which Russian goods would be supplied in return for Iranian oil, which Russia would then sell in the international market.

Despite hectic diplomatic activity and intense speculation, the Helsinki summit does not seem to have yielded any dramatic results. At the Putin-Trump press conference, there were no references to Iraq, the Kurdish issue in Syria, or the concerns of Turkey, Lebanon and Jordan.

The Russian leader applauded the operational channels of communications set up between the Russian and US militaries in Syria. He also spoke of their joint commitment to “establish peace and reconciliation” in Syria and to make efforts to address the humanitarian crisis in the country and facilitate the return of refugees.

Both leaders upheld the importance of Israel’s security. But Mr Putin also made clear his support to the Iran nuclear agreement, which he pointed out had made Iran the “most controlled in the world” and had ensured the “exclusively peaceful nature” of the country’s nuclear programme.

Mr Trump failed to respond to these remarks.

While speaking about the separation of Syrian and Israeli forces in the context of ongoing military operations in south Syria, Mr Putin made an interesting reference to UN Security Council Resolution (UNSCR) 338: he called for “full compliance” with this resolution which would bring peace to the (disputed) Golan Heights, promote peace between the two countries and provide security to Israel. He added that Mr Trump had paid “special attention” to this matter and that Russia would move forward on this basis.

Mr Putin’s resurrection of an agreement that has been lost in the fog of history has led to considerable discussion in the regional media. Israel has welcomed these remarks, seeing in them a message that Iran and its allied militia should pull out of the Israeli border and possibly even leave Syria altogether. Saudi commentators see in Mr Putin’s remarks US acceptance of Russia’s presence in Syria at the expense of Iran and Turkey, both partners in the Syria peace process and rivals of the kingdom in that country.

This limited understanding of Mr Putin’s remarks misses the resolution’s history and context: UNSCR 338, issued in October 1973, besides arranging for the disengagement of Syrian and Israeli forces, also called for the full implementation of UNSCR 242 that, in turn, had demanded Israel’s withdrawal from territories occupied in 1967 and the initiation of negotiations between the Arab and Israeli sides. Mr Putin’s reference to resolutions from a bygone era is well-timed — it comes just when Mr Trump, through his son-in-law and adviser Jared Kushner, is promoting his own “deal of the century” that, according to reports, is seeking to do away with the Palestinian issue altogether by providing Palestinians with economic benefits through investments in infrastructure and industry in place of a sovereign and viable state. Gaza will then perhaps go to Egypt, while a moth-eaten West Bank will come under Jordanian control. Ergo, the Palestinian issue will cease to exist in what Mr Trump now calls the “ultimate deal”.

Mr Putin’s remarks, the import of which might have been missed by Mr Trump, have him joining other Arab leaders (that is, those from Egypt, Saudi Arabia, the UAE, Qatar and Jordan) in rejecting the Trump-Netanyahu-Kushner plan. The Arab leaders had instead insisted on the Arab peace initiative, which called for Israel’s vacation of the occupied territories and the setting up of a sovereign and viable state, with Jerusalem as its capital. Besides the immediate matters pertaining to Syria, the summit was important for the two world leaders to build a personal understanding and address global issues of mutual interest, besides of course the turmoil in the United States relating to Russian “interference” in the 2016 presidential race that had promoted Mr Trump’s electoral interests. This was too early for a “grand bargain” on West Asian issues, though, given their differences, it might not even be possible later.

This has left the region in a miasma of uncertainty. We will know soon if the ongoing competitions and rivalries will be addressed through statesmanship or descend into a war.