One doesn’t have to hug every person one passes in the street, but it now permits grandparents to embrace their grandchildren, etc 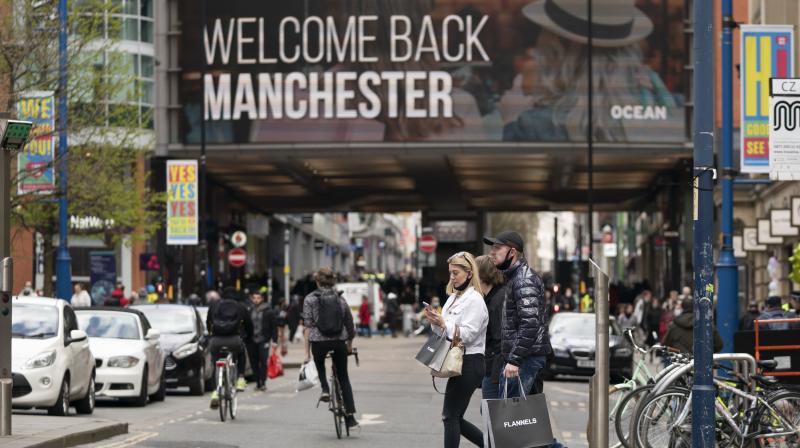 Shoppers in central Manchester, England, as coronavirus restrictions are eased in England. Thanks to an efficient vaccine roll out program and high uptake rates, Britain is finally saying goodbye to months of tough lockdown restrictions. (AP/Jon Super, File)

“If the last shall be the first

What happens to in-betweens?

This is the sort of question I asked

When I was in my teens,

But now that I’m a man

And put away childish thoughts

And spend my time in wondering

What happens if crosses are noughts?”

The world awaits, with bated breath, the results of the triumph of sense and science over nature. The PM of the United Kingdom of Great Britain and Northern Ireland, one BoJo, says he is “following the science” and attempting to restore the country in measured steps to something like normality. All manner of measures and the suspension of suspensions have been announced — six people from two different households can now meet indoors; barber shops or hairdressing saloons can reopen; so can gymnasiums.

Perhaps most popular with the public at large is the reopening of the insides of pubs. Two weeks or so ago, you could, with social distancing, sit in the gardens of pubs or at tables on the pavements outside them, but from last week (hurrah!) you can drink at the bar.

As the first wave of the plague receded, chancellor of the exchequer Rishi Sunak announced a scheme to induce people to eat out at restaurants by promising to pay half the bill or something. People did go to restaurants as a result and the hospitality industry got a boost -- but so did the Covid plague. Triumph of ingenuity to the defeat of foresight. Take a bow Rishi, or maybe even take the knee, as proportionately more black people died as a result of the second wave.

But the UK government remained keen on currying favour, so to speak. They have now allowed the opening of restaurants and at last I can go to the Star of India or the Taj Mahal and enjoy a Bangladeshi version of Dhan Sakh! -- er, maybe not!

And in the move towards being the cuddly, loveable government, BoJo has announced the crowning measure of opening up Britain. Yes folks, from the middle of last week people are allowed to hug each other!

Gentle reader, this is not another instance of my warped humour — it’s absolutely true. This great democracy has taken to legislating for when its citizens can hug each other.

It’s not compulsory. One doesn’t have to hug every person one passes in the street, but it now permits grandparents to embrace their grandchildren, etc.

My impression is that different cultures have distinct attitudes towards hugging. I’ve always thought that Russians and Indian politicians who regard themselves as equals went in for a brotherly hug. As soon as BoJo announced this advance in British freedoms, some commentators in the press protested that they were averse to hugging anyone as it was not acceptable in British culture. One writer even went on to say that where she came from in the north of England, if a gentleman unwittingly hugged her mother in greeting, her father would have assaulted the miscreant and perhaps killed him. A bit severe and perhaps not quite the truth -- but then we columnists have our peyt ki puja to consider.

All through the pandemic year, I have thought that the typical Indian greetings and ways of showing love or respect were the safest. So instead of knocking elbows I have resorted to a simple namaste with folded hands. I don’t at my age do it myself, but I find the practice of touching an elder’s feet and drawing energy from their aura or magnetic field or whatever, would stop you kissing them on both cheeks and inviting a leap of viral infection.

Hugging has, through history, been symbolic of sealing a deal. Traditional enemies come to an agreement and seal it with a hug. I can’t be sure, but I think years ago I saw, on film, Richard Nixon hugging Deng Xiaoping — or perhaps it was Khrushchev and Nehru or someone.

Myself? I have always been wary of sealing a deal with an erstwhile enemy with a hug because very early in life the history books told me the story of the Maratha hero Shivaji hugging his enemy, the unwary Afzal Khan, and digging a metal waag nukh into his lung and ripping him apart.

And some part of me has, I must admit, been more inclined to kissi than to koti, but depending on the halitosis and the bulk and body odour of the opposite number, I am partial to an indulgence in both. One waits for the British government to lift the ban on kissing.

But enough confession. Every day BoJo’s office issues warnings that the relaxation of restrictions and lockdown caveats will be constantly reviewed. There is more than a hint in these communiques that, depending on the statistics of deaths and the spread of fresh infections, this may even result in a reversal of liberties. The “Indian variant” of Covid-19, as it’s now universally known, has reportedly spread through 80 British “councils” (municipalities) and “the science” is still trying to determine whether the vaccines we have can stop it generating a third wave. This science tells us that it is more virulent and spreads faster than its uncles, the original, South African or Kent “variant”.

The nation watches this space in trepidation. Will the pubs shut again? Will hugging be banned?