Farrukh Dhondy | Vaccines on the way… amid talk of conspiracies, Bill Gates’ role

When the vaccine was announced, instead lining up for a shot, I read all manner of lunatic anti-vaccine propaganda 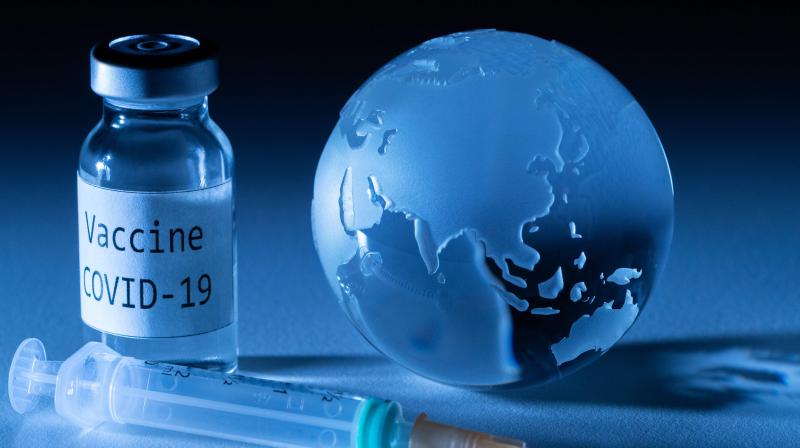 An illustration picture taken on November 19, 2020, shows a vial with Covid-19 Vaccine sticker, a syringe and an earth globe. (AFP)

“I drive, therefore I am

If you want some change, be the change

I don’t go for chillar, dollars -- the whole range!

I’ve done unto others as they would do unto me

Now not the best F …ing lawyers can set me free… “

Every boy and even some girls I knew in Pune in my boyhood had two marks like little wrinkled lips on the top of their left arms. My two scars stood out for years and then age eroded them and now they are gone. Those were the marks of vaccination that Doctor Frenchman (yes, I know, but he was a Parsi and we inherited all manner of surnames through our subservience to European colonialism) dispensed, against various possible diseases, including rabies, because we lived amongst mad dogs.

Now every year in London I go down to my local surgery and get a free “flu jab” on the UK’s National Health service. It’s rendered by a needle injection and, apart from a bit of discomfort in the same location below the left shoulder, leaves no mark. As I was a mere infant when Doc Frenchman inoculated me, I don’t know how the scares came about, but using my renowned forensic skills, I deduce that it was a cut with a sharp blade into which the vaccine was introduced.

I am sure the anti-Covid-19 vaccine, promised by the end of the year to the most vulnerable and then to the general population, will be delivered by a needle injection.

The announcement that these anti-Covid vaccines are in the stages of testing and perfection is welcome news. I look forward to a time when, with the aid of the vaccine, the population is shielded against this contemporary plague and we can mingle and live our lives as dharma and karma dictate. I will line up for the vaccine as soon as my generous and caring local medical practice indicates its availability. I shall even advise all the illegal immigrants I know, though they are mostly wary of exposing their status, to register close to where they live and get a jab.

When the vaccine was announced, instead of praising Ahura Mazda and lining up for a shot, I read all manner of lunatic anti-vaccine propaganda. Some of it is reported on the news and some of it pops up on my mobile phone and my email as unsolicited, threatening information. Now I am sure, gentle reader, that some or all of you have been subjected to the same load of contentious contentions — I will suppress the stronger terms that come to mind. (Yes, keep it clean-Ed.)

One persistent message on these platforms urged me to reject the vaccine because it said it was a ploy by Bill Gates and his wife to secretly inject billions of humans with a microchip which would then make those supposedly vaccinated people slaves to Mr Gates who would control their lives and instruct them what to do. They would become the robot civilisation of the Gates family!

“Destroy your Apple computer. Buy one of ours!”

The Gates family (not to be confused with The Doors, and renowned inventors of Windows) are known to have saved millions of lives through their charitable endeavours through supplying medicines to the poor. It is ironical then that a survey in the United States among those who voted for Donald Trump found that 46 per cent believed that Covid-19 was a hoax and among them were believers in the Bill Gates conspiracy.

They were, of course, the same people who said they wouldn’t have the vaccine when it became available. Other conspiracy theorists, including a taxi driver hired by the BBC to carry me to a recording, determinedly believe that the Covid-19 symptoms and deaths are not caused by a virus, but by the presence or proximity of 5G mobile phone towers.

O Tempora O Mores! This is the twenty-first century, and the human brain has evolved for billions of years. And yet, and yet…!

The fact that Pfizer, which was the first company to put forward an effective, tested and safe vaccine against Covid-19, has had its share price skyrocketing is not surprising. If I announce the discovery of a diamond mine in my back garden, the price of my property will go up. Of course, the conspiracy-wallas would say that this was what it was all about — set a disease loose on humanity and then sell the cure for zillions. The reported facts are that Pfizer’s vaccine, which has to be kept at minus 70 degrees Centigrade, will cost £30 for the two doses, fuels such crazy speculation. The second vaccine, developed by AstraZenica and Oxford, expected soon, will stay healthy at home-refrigerated temperatures and will cost a mere £2.23 a dose.

When I was in Pune last, I was shown around the vaccine manufacturing plants of the Serum Institute of India, set up and owned by my friend and schoolmate Cyrus Poonawalla. His institute has manufactured and distributed, at loss-making, nominal costs, scores of vaccines as a humanitarian gesture and I am now told that the institute is working on an anti-Covid vaccine in partnership with the US Codagenix. I am confident that when it is tried and tested, Cyrus won’t be charging £30 a go.