Akash Deep Anand
The writer is a retired colonel with 37 years’ experience in the Indian Army infantry, including stints in Poonch-Rajouri and Ladakh

Tuesday, October 20, marks 58 years to the day the Chinese launched their synchronised and coordinated attack in Ladakh, Arunachal Pradesh 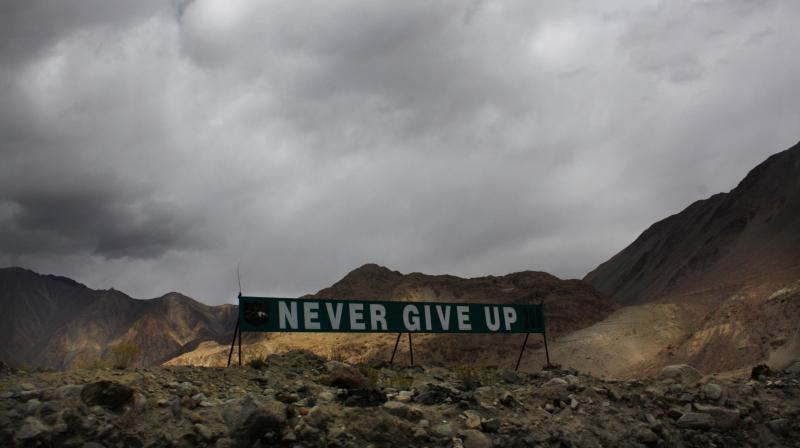 A banner erected by the Indian Army stands on a ridge around the Pangong Tso lake in Ladakh.

Tuesday, October 20, marks 58 years to the day the Chinese launched their synchronised and coordinated attack in Ladakh and Arunachal Pradesh, then known as the North-East Frontier Agency (NEFA) on October 20, 1962. It is pertinent to note the choice of a Saturday as a mark of Chinese planning and cunning; the Indian decision-making apparatus would be enjoying a weekend break, though the concept of a five-day week was to come much later. In NEFA, their chosen theatre of operations, the Chinese successfully eliminated all military opposition by the time they declared a unilateral ceasefire on November 20, 1962. The Chinese attack in Ladakh overran the small standalone posts in Galwan, Pangong Tso and Chip Chap River areas. The Indian troops here gave a valiant account of themselves but were heavily outnumbered and outgunned by better-prepared Chinese.

This area is again active 58 years later as the outstanding matter of settling the borders between the two nations hasn’t been resolved. Unlike the India-Pakistan Line of Control (LoC), in J&K and Ladakh, the 1962 war led to the concept of a Line of Actual Control (LAC) along the Sino-Indian frontier. There is no demarcation in both situations. In the LoC’s case troops on both sides are generally within range of small and medium arms, in an eyeball to eyeball deployment, except in certain gaps where physical deployment is not possible. Incidentally, these are the gaps used for infiltration from across the border. In the LAC’s case, troops have been separated by far greater distances except in a few locations like Nathu La. As long as troops maintain considerable distances, the chance of clashes are minimal unless one side chooses to press a claim line by moving forward going by their assessment or comprehension of the LAC.  It is because of such an action of staking their claim over Galwan Valley by the Chinese that the June 15 clash took place, resulting in casualties on both sides, an unspecified number of Chinese and 20 of ours, with Col. Santosh Babu, 16 Bihar’s CO, and 19 soldiers killed in action.

With the LAC not being delineated (specifically described and agreed) and demarcated (marked with pillars, fences), the alignment is open to interpretation by troops and their commanders on the ground. Further clashes thus cannot be ruled out. Since the Chinese have been obdurate in disengagement by not pulling back, let’s examine the factors behind China’s behaviour:

Daulat Beg Oldi (DBO) lies 8 km from Karakoram Pass, through which passes the Karakoram Highway linking Sinkiang with Pakistan. It is 9 km northwest of the LAC in Aksai Chin. The highway is important for the One Belt One Road (OBOR) project initiated by Xi Jinping with massive financial and political commitment. Indian infrastructure developments in the area are considered a potential threat to G-219 and the OBOR project.

India is raising objections to the OBOR project in Pakistan-occupied Kashmir, Shaksgam Valley (ceded to China by Pakistan) and the Gilgit-Baltistan area, which are claimed as part of J&K.

Chinese objections to the abrogation of Article 370 and bifurcation of the erstwhile state of J&K into the UTs of J&K and Ladakh which is claimed by China as one of “five fingers” of Tibet, the others being Nepal, Bhutan, Arunachal Pradesh and Sikkim.

Development of Indian maritime infrastructure in the Indian Ocean region, where China intends to extend its reach and influence.

India aligning its strategy with the United States, which is engaged in a trade war with China over tariffs, the 5G infrastructure of Chinese IT giant Huawei, Covid-19, theft of intellectual property and American technology, to name a few.

China has been hit hard by the worldwide Covid-19 pandemic, which originated at Wuhan in Hubei province. The consequent suspension in exports has led to a loss of earnings and reduced consumption in China. There are reports of food shortages and large-scale migration into the urban centres, leading to social tensions.

The Chinese exchequer is simultaneously burdened with the expenditure on OBOR.

A comparison with 1962 and China’s then leadership under Mao Zedong is in order. Communist China’s 2nd Five-Year Plan 1958-63 undertook the “Great Leap Forward”, an overambitious project to boost agricultural and industrial growth. It is beyond our scope here to detail the specifics of that debacle. It’s sufficient to say that overambitious unachievable targets led to a famine which caused an unspecified number of deaths: around 18 million to 45 million. Other purges like the Cultural Revolution were to cause many more deaths; some estimates put the total number of Chinese deaths due to Mao and his policies at 80 million. That such a tyrant died peacefully in his own bed is a mark of how much control the Chinese Communist Party (CCP) and its undisputed leader has over China’s public. However, even dictators like Mao have detractors, thus they too need distractions. One of the reasons why Mao chose the opportune moment of a US-Soviet nuclear standoff over Cuba to divert the attention of detractors by ordering his PLA (People’s Liberation Army) to launch the 1962 attack against India.

One also has to look at the role played by the then Indian leadership, and its principal players like Pandit Jawaharlal Nehru, V.K. Krishna Menon, Generals P.N. Thapar and B.M. Kaul through their amateurish “Forward Policy” of establishing small standalone posts along the frontier in the territorial claim line, assuming against all evidence and intelligence that the Chinese would not launch an offensive.

Starting in the 1980s, India has taken steps with China to ensure tranquility along the disputed frontier. Did the present government lull itself into the belief that our actions to ramp up border infrastructure would not attract a belligerent response? Did Narendra Modi end up imitating the blunder of Pandit Nehru? Did he assume his personal rapport with Xi Jinping after his back-to-back summits at Wuhan and Mamallapuram had cemented such bonds that Mr Xi would simply acquiesce with our actions on an unsettled frontier that would raise the hackles of China’s strategic hawks as well as his own detractors?