Shreya Sen-Handley | To India, With Love

Shreya Sen-Handley
Shreya Sen-Handley is the author of the award-winning 'Memoirs of My Body', short story collection 'Strange', and new travelogue 'Handle With Care', and a columnist and playwright. Her Twitter and Insta handle is @shreyasenhan.

To paraphrase that popular maxim, you can take the girl out of India, but you can’t take India out of the girl! 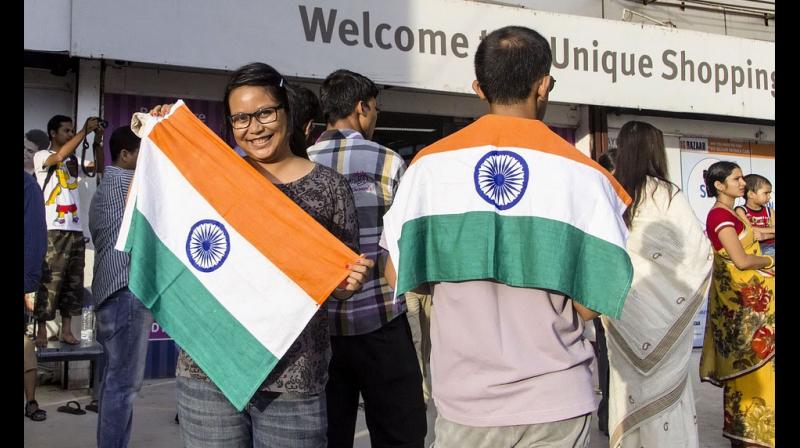 What is it that makes our ties with our country of birth so strong? The clue’s in the name I reckon, with our “birth” linking us to places with an invisible umbilical cord. (Source: Pixabay)

This August, as India celebrates its 75th year of independence, I mark my first as a British citizen.

And it does feel strange.

I’ve lived in the UK for 22 years now, almost half my life and nearly all of my adult years. In fact, having spent much of my childhood outside India as well, I have lived most of my life away from the country of my birth.

My time in Britain alone is longer than my life in India. Kolkata, where I spent more years than in any other city I’ve called home, is about to be challenged as the longest-serving by my current abode of Nottingham.

The numbers tip clearly in favour of the “away” team, and don’t explain my sense of loss at relinquishing my Indian nationality.

I held back from applying for British citizenship for well over two decades of living in Britain, finally accepting the need to be practical, and putting in for it at the start of this year. And though many ignominious hoops had to be jumped, and many mountains of paperwork completed (and many hefty fees paid), before I could apply; once I did, the British government swiftly approved my citizenship. I told you so, people exclaimed, you should’ve done it aeons ago.

Acquiring citizenship of the country that’s been my home for so long was certainly the sensible option.

Amongst other problems posed by my loyalty to my Indian passport, has been its deterrence to travelling.

Despite the fact that my husband and children, all British by birth, could breeze through customs at any airport, they’ve always stood with me and my desi passport in long airport queues in solidarity —no matter their tender age, or exhaustion from gruelling hours of travel. I couldn’t subject them to that anymore, or hold them back from seeing the world, which my passport had occasioned.

But another, more important, motivator was that, in the current anti-migrant climate, with governments liable to change rights of residence at the slightest pretext, we didn’t want our family suddenly separated.

Compelling reasons to adopt my new nationality, so why do I feel so disoriented?
Perhaps, the answer to why I took so long to apply, is also the reason it feels… unsettling.

For one, I hate bureaucracy, in any country, and pandering to their usually ludicrous requirements.

Labels, tags, and silos, I abhor as well, and nationality is one such marker. I’ve always considered myself a global citizen; no matter where I lived, or what passport I carried. Belonging to everything, but circumscribed by nothing, was the only badge I wore. The jingoism that’s annexed nations of late, is reason enough to give a wide berth to this particular compartment of existence.

Yet, in surrendering my Indian nationality, I feelbereft in a way that’s bothprofound and puzzling.

Recently, I’ve found myself not only crying over a perfectly-formed dosa at our favourite South Indian restaurant, but also closely following the fortunes of the Indian contingent at the Birmingham Commonwealth Games, when the Commonwealth itself I consider passé. On top of which, I have been plying my children with Hindi films, when I was never a fan myself!

But nothing essential has been amputated. Our passports do not define us culturally, leaving me free to be as Indian as I please, to travel back as often as possible (after accruing an Overseas Indian visa and another bunch of fees), or to call India, especially Kolkata, my joint home still.

Is it “blood” – genes and race – that forges this unbreakable allegiance? To quote The Guardian, “Researchers have even suggested that when it comes to issues such as religion and politics, our choices are much more determined by our genes than we think.”

What is it that makes our ties with our country of birth so strong? The clue’s in the name I reckon, with our “birth” linking us to places with an invisible umbilical cord. But “invisible” immediately implies that it’s psychological rather than physical, with nurture supplanting nature.

Both deeply interested Romantic Poets, who viewed the loyalties and partialities absorbed in our earliest years as indelibly ingrained. To Wordsworth “the child is father of the man”, or as Sigmund Freud put more prosaically, “We are what we are, because we have been what we have been.”

I, on the other hand, won’t even try to pin down the most instinctive parts of myself, i.e. my Indianness. Both the good and bad, some of which I tried to outrun in my youth, I’ve recognised as inevitable, and learnt to embrace.

I cannot explain, for example, why the smell of Indian food evokes such a sense of well-being in me, when, in fact, I love a range of international cuisines. I couldn’t tell you either why vivid Indian colours lift my spirits, or why desi fabrics feel especially comfortable against my desi skin.

Nor could I tell you why I talk to every person I overhear speaking Bengali, or find myself reminding folks how ancient and multi-faceted India is, or have a mild horror of feet — all much-lampooned stereotypical traits that are also, admittedly, true.

Even as I laugh about them, I now revel in these aspects of myself. These deeply-rooted prompts from my childhood have become more precious, and more cherished, as I grow away from them.

To paraphrase that popular maxim, you can take the girl out of India, she can even love a great many features of her new country (literature, landscape, and more), but you can’t take India out of the girl!