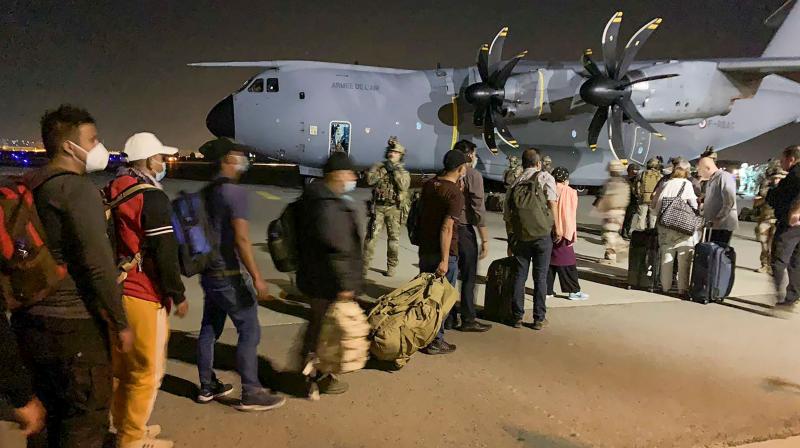 Afghan nationals line up to board a military transport plane at the Kabul airport on August 17, 2021, for evacuation from Afghanistan after the Taliban's military takeover of the country. (AFP)

I have known Secunder Kermani from the day he was born. Those of you who watch the news on the BBC will probably know that he is the BBC’s Pakistan correspondent, and his brief extends to covering Afghanistan.

The last few days have been very tense for my very good and long-standing friends, Secunder’s parents (whom I shall not name for a very specific reason), who live in London and have been in as constant touch with Secunder as phone connections allow.

He reported from several cities as they fell to the Taliban offensive -- a hurricane through yielding fields. The offensive turned Secunder from a reporter into a war correspondent.

Having lived through the era of the Vietnam war and closely followed the reports of the war correspondents, I must admit to having taken these brave men and women for granted. I mean, I didn’t give a thought to the dangers of their situation, even as I followed the wars and their reports from, say, Bosnia.

It was when the death-cultists of the Middle East, the Daesh or ISIS, as they were variously called, began executing journalists and putting videos of their beheadings on the Internet that the phrase “war correspondent” was accompanied by a shudder for the courage of him or her who would voluntarily enter the jaws of precarious possibility.

So, when, after watching Secunder report from Mazar-e-Sharif, which had in the previous few hours fallen to the Taliban advance, I called his father to enquire about him, and was told that they were worried to pieces and distraction as he was now headed to Kabul -- as were the Taliban.

And then the world heard, through the uninterrupted coverage on very many TV channels, that the Taliban had entered Kabul and that the President of Afghanistan had fled to Tajikstan (and then to the UAE).

So where was our Secunder? The next thing I heard, keeping in touch on the phone, was that he was headed to Kabul airport with the intention of getting back to his base in Islamabad as he had, through having had a suspected case of Covid-19, a scheduled return ticket.

The airport was in chaos with thousands of people attempting to leave the country. I tried to muster reasons to offer some reassurance, some shield against inevitable anxiety to his parents -- and to myself.

Then the UK government announced that it had sent 600 troops to ensure the evacuation of British citizens, but I didn’t know whether this applied to Secunder. Still, to my mind, that was a good bet.

The best argument that occurred was that the high command of the Taliban, if not their rank and file, would want to project themselves as “responsible” an image as they could to an anxious and bewildered, if not hostile, world. There were statements from some delegated spokesmen of the Taliban that women would be allowed to go to the markets unaccompanied -- Wow! A real step towards human rights. One of their turbaned and bearded spokesmen even said that as long as women covered themselves in hijabs, they could go to school for a few years before they reached puberty and became breeding-machines for more Talib warriors.

Was this all reassuring? Did it mean that with this great liberalisation of their ideology, they would see foreign journalists as the vehicles to spread the new message of a liberal Talibanist Afghanistan? Then one heard, through the same channels, that the new controllers of Afghan cities outside of Kabul were getting on with chopping hands, stoning women, beheading or shooting people associated with the government they had defeated and generally indulging in acts which would have made an ISIS death-cultist proud. Then I heard Secunder was back in Islamabad. Phew! But not phew! The next day he saw it as his absolute duty to fly back to Kabul and courageously report on the most devastating event on his turf. He voluntarily flew back.

Let me now say what Secunder’s BBC brief probably prevents him from saying: The developments in Afghanistan will be historically seen as the greatest example of international hypocrisy: A force dedicated to Sharia and the Quran sells toxic heroin to buy armaments: the Prime Minister of Pakistan, otherwise known as “Im the Dim”, hails the success of an insurgent movement at the instruction of the “Muslim” whisky-priests of the Pakistan Army; China stays put in its embassy in Kabul negotiating filling the gap of withdrawn Western aid to Sharia maniacs while sending Uighur Muslims to virtual concentration camps; Russia, chased out of Afghanistan over 30 years ago, now extends a friendly hand to the Talib government… As for the United States and Britain, where does one start?

The statements coming out of the White House, the Pentagon and the Democratic administration would make Alice feel that Wonderland held no contradictions, irony, puzzle or downright hypocritical celebration.

In the British Parliament, dissenting MPs make brave speeches about rescuing those who had assisted Britain’s abortive efforts in Afghanistan. Radical but too-late speeches -- all about urgently evacuating the perhaps 20,000-odd individuals who are at risk of revenge executions from the Taliban. So, what does home secretary Priti “Clueless” Patel do? She says that there is space in Britain for just 5,000. Murder most foul!