It is true that the Indian missile — air, land and water — programme has the aim of nuclear-tipped weaponry. But it is not the sole strategy. 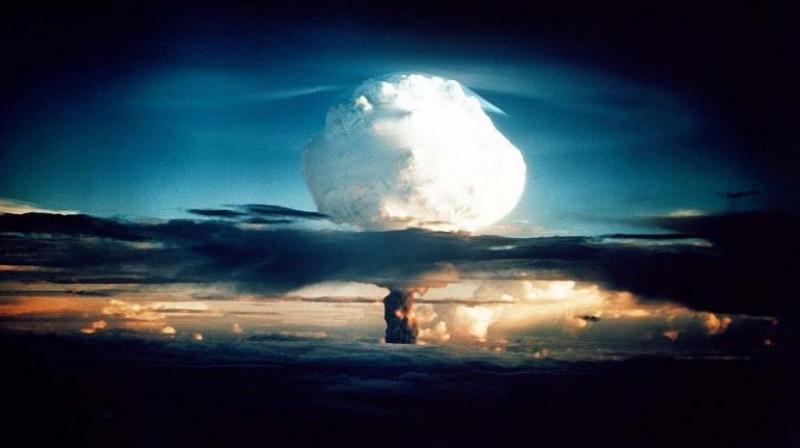 The quickness with which Indian right-wingers and Pakistan’s hardliners bring in the nuclear option into the barbed exchanges between the two countries reveals that the leaders of these two countries behave like leaders of banana republics. (Representational Image/ Pixabay)

There was defence minister Rajnath Singh’s tweet about changing India’s “no first use” of nuclear weapons option in future “if the circumstances change”. There is now Pakistan PM Imran Khan’s comment about India’s nuclear arsenal not being safe. Mr Singh’s statement was both impolitic and provocative in the context of the abrogation of Articles 370 and Article 35A in Jammu and Kashmir, and Pakistan’s agitated response, which has not won any serious support either in the UN Security Council (UNSC) — and it came up at the UNSC because of China alone — or anywhere else, especially in the Arab countries. So, for Mr Singh to talk about the nuclear option in a casual manner has no justification unless he had intelligence inputs about Pakistan’s thinking about nuclear options, and his tweet-statement was meant as a warning. But that was not a mature response even if it were true that the Pakistani establishment was thinking of nuclear options.

Mr Khan’s reference about the Indian nuclear arsenal being unsafe is quite laughable because it was Pakistan’s nuclear arsenal that was considered dangerous when war broke out in Afghanistan at the end of 2001, and then US President George W. Bush declared “war” on global terrorism, and the international Islamic jihadi groups were active in Pakistan. There was serious concern in the United States about rogue militant groups capturing Pakistan’s nuclear weaponry. Pakistan political and Army leaders had to issue assurances that its nuclear arsenal was safe. The Pakistan PM’s nervous talk may be based on his political perception that an aggressive Hindu-dominant BJP might choose to resort to the use of nuclear weapons against Pakistan.

The quickness with which Indian right-wingers and Pakistan’s hardliners bring in the nuclear option into the barbed exchanges between the two countries reveals that the leaders of these two countries behave like leaders of banana republics. They do not seem to understand that nuclear weapons are meant for deterrence, and they are not meant to be used. That is the classic Cold War credo, and it worked. The two major Cold War rivals, the United States and the then Soviet Union, knew that the nuclear arsenals were meant for Armageddon and they were never to be used as weapons of first resort. And that is how the Cold War era played itself out. In India and Pakistan, especially when the BJP is in power in India, talk about nuclear weapon options enters the discourse as though we are speaking about anti-aircraft Stinger missiles. It is true that the Indian missile — air, land and water — programme has the aim of nuclear-tipped weaponry. But it is not the sole strategy.

There is a need to educate the leaders of the BJP about the issue of nuclear weapons. This is necessary because of the thinking of the party on Pakistan and their misplaced notions about subcontinental history. While it is true that the Islamic hotheads in Pakistan —they are mostly confined to the seminaries — with their delusional notion of restoring Islamic rule in the whole of the subcontinent do think of nuclear weapons in terms of winning a war, a similar thinking is to be found among Hindutva hotheads, and more so in North India, that Muslim Pakistan is the “eternal enemy” of Hindu India, and there is need to fight a nuclear war to settle the issue. It would not be possible to control the thoughts of fanatics on both sides, but it is not unreasonable to demand that those in government in India and in Pakistan must speak and act responsibly, and especially so when it comes to the use of nuclear weapons.

There are of course real military compulsions when India and Pakistan acquired a nuclear weapons capability through a series of tests in May 1998. The Indian motive for acquiring the nuclear weapons capability was ostensibly not Pakistan-centric, but for Pakistan India was the sole enemy, and it did not have superiority over India in conventional warfare. And for nearly two decades, Pakistan sought to blackmail India over the outbreak of conventional hostilities by flaunting its nuclear options. This was especially so when the Atal Behari Vajpayee government mobilised the armed forces on the border after the attack on the Indian Parliament in December 2001. Pakistan’s then military ruler Gen. Pervez Musharraf talked about using localised nuclear cluster bombs to deter Indian troops crossing the border. The aerial strike on Balakot this February was a strategic move by India for outflanking Pakistan’s nuclear threat. But India was careful enough to declare through its foreign secretary’s statement that no military or civil installations of Pakistan were being targeted.

The BJP leaders have once again been aggressive when Mr Singh and information and broadcasting minister Prakash Javadekar declared that the only issue that remains to be discussed with Pakistan on the question of Jammu and Kashmir after the abrogation of Articles 370 and 35A is Pakistan-occupied Kashmir (PoK). This sends out a belligerent signal. Pakistan has either to absorb that part of Kashmir following the example of the Modi government or stop pretending that the issue of Kashmir remains to be settled.

India and Pakistan must learn to be behave like sovereign states with regard to each other. India’s first Prime Minister, Jawaharlal Nehru, harped on this point time and again when some of his partymen — there was a strong enough contingent of the Hindutva kind inside the Congress then — at the Jabalpur session in 1961 after rioting in Pakistan. While the abrogation of Articles 370 and 35A was certainly India’s prerogative in dealing with one of its states — it is a different matter that some of us are of the view that it was not the way to do it — the aggressive talk by BJP leaders about PoK may not be of great help.

Many people in Pakistan do not consider Kashmir to be the bone of contention between India and Pakistan, and so do many in India. Leaders in the two countries must understand that nuclear weapons cannot be used as a counter for bargaining over the Kashmir issue.