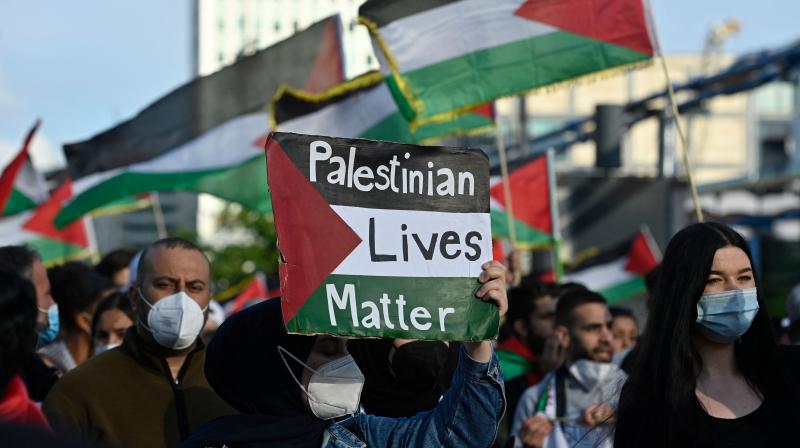 A demonstrator displays a placard reading: "Palestinian Lives Matter" during a pro-Palestinian protest in Berlin on May 19, 2021. Thousands of demonstrators marched waving Palestinian flags and shouting pro-Palestine slogans as Israel and the Palestinians were mired in their worst conflict in years. (John MACDOUGALL / AFP)

It is perhaps necessary to start with a description of the trigger which led to the escalation resulting in the current run of cross-border strikes in the Israeli-Palestinian standoff. This is important although we have seen much of the same in the past. What is also important is to get the bigger picture right.  But first, we need to outrightly condemn the sheer lack of concern for the loss of civilian lives by both sides in the senseless conflict which has been in perpetuity in the Middle East. It is one of those conflicts in which one starts tracing history to lay blame but in reality can take no sides. Hamas is an organisation sworn to the use of unbridled violence and is never concerned about the misery it brings to its own people without even a positive hope in return. Israel justifies its use of overkill of counter violence because of its isolation in a sea of adversaries, where any evidence of its softness is perceived to play against it. It’s a dilemma for us in India too as our interests lie with both sides and with peace.

The cause of the trigger reportedly was an attempt to evict a few Palestinian families from the Sheikh Jarrah area in East Jerusalem where some Israeli settlers were to be housed; an old legal case was coming to judgment. This is not something unusual. However, it came in sync with another event involving sentiment and that was the imposition of the limit of 10,000 attendees at the Al Aqsa mosque compound in Jerusalem, the third of the holy sites of Islam. The Israeli police attempt to implement this rather harshly in the period of Ramzan led to violence and frayed tempers. That spiralled more violence, which in turn led to the firing of missiles by Hamas from Gaza on Jerusalem and other Israeli cities, and a very strong response from Israel with threats of ground operations as well. It was the first time that this was happening after 2014, and many television serials such as Fauda have been made in the interim period through which the dynamics of this unfortunate conflict get to be better known. The seriousness can be gauged from the fact that ordinary Israeli Arabs and Jews have been making attempts at lynching each other in some cities.

In this decade so far, it’s clear that the Palestinians have never been so alone, and Hamas ruling over their destiny has given them little hope of peace and stability. Fatah’s moderation does not really count, and most Arab governments have been busy with Abraham Accords, virtually signing off on the Palestinian cause. The Trump administration’s peace formula favoured Israel and Palestinian voices were never heard through the so-called “deal of the century”, anchored by Jared Kushner, Donald Trump’s son-in-law. Even the Palestinian capital offered in the accord is not East Jerusalem; it’s a territory offset from it with the Shuafat refugee camp within. Building a capital is never a problem, but it’s the angle of fairness and perception which Mr Kushner and Mr Trump had no time for. There were no responses from Palestinians then, possibly because of the known stance the Trump administration would take. The sentiments have all been there, the eviction of Palestinians from Sheikh Jarrah and the police action at Al Aqsa mosque are just events which triggered emotions. Events in conflicts many times bring to a head some issues that then spiral out of control and that is exactly what is happening here.

Pent-up fury among Palestinians against Mr Kushner’s peace formula probably erupted but could have been aided by external backing — the usual finger-pointing is towards Iran. Tehran actually has little to gain from this turbulence because it’s in negotiations on the JCPOA with the United States in Vienna and needs no demonstration of its capability to play proxy games anywhere in the Middle East. The one trend to which all fingers appear to point as having a connection with the trigger is the political instability within Israel keeping Prime Minister Benjamin Netanyahu on tenterhooks due to the political minority status of his government and the personal corruption charges which he is attempting to overcome through shenanigans such as appointing a loyalist as justice minister. These events have come to his rescue and the robust Israeli response and the casualties suffered by Israel have helped bolster a nationalistic fervour which Mr Netanyahu hopes will enable his Likud Party to retain power.

How does the conflict affect the international geopolitical environment? First, both Iran and Turkey, having already established a moral ascendancy over the Arabs by being critical of the Abraham Accords, chose to strongly condemn Israel’s resort to violence against civilian targets. It’s the Arab nations for whom a major dilemma has been created, particularly those which have signed accords with the US and Israel — UAE, Sudan, Morocco and Bahrain being the four which did so; while the Saudis have a virtual accord without a paper to back it. Media analyses within the Arab world justified the stance as the creation of a road towards eventual peace with Israel, halting further annexation of Palestinian territory. The consternation created in the Islamic world by recent events will probably harden the internal conflict to the advantage of Iran and Turkey; Pakistan too has shown inclination towards them despite recent attempts at rapprochement with the Saudis through visits to Riyadh by Prime Minister Imran Khan and Gen. Qamar Javed Bajwa.

So just as the world was thinking the Middle East had been quieted by US diplomacy and one of the core causes for discord between the Islamic and Western worlds had been set aside, we find an escalation that bears potential for serious rekindling of conflicts. It brings to light the fact that a conflict which has occupied the world’s centre space for seven decades can’t be artificially resolved without having on board all the stakeholders. President Joe Biden’s administration seems to have been taken by surprise; perhaps enough analysis of the half-baked “deal of the century” was not done and the presumed stabilisation of the Middle East was taken at face value. It’s not just physical conflicts but far more importantly it’s the civilisational discord all over the world which bears potential for rekindling which could have serious consequences, including upon America’s ambition of a reset in geopolitical priorities in the post-pandemic era.