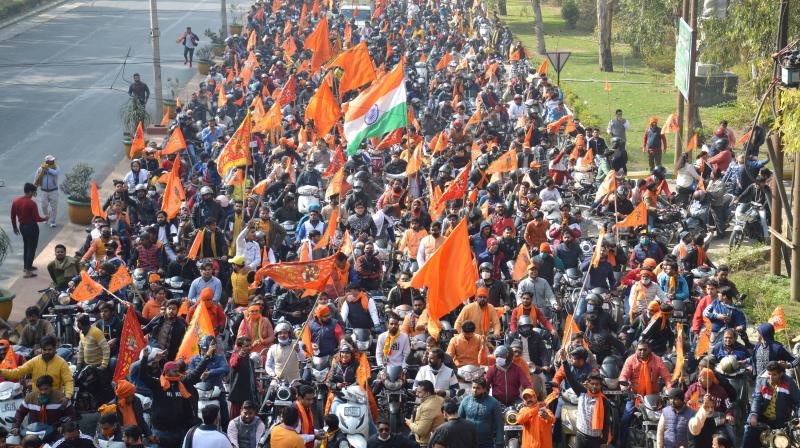 It is good that the Ram Temple at Ayodhya is being built largely through public donations. This was the model for the reconstruction of the Somnath temple in 1951. The initiative to rebuild it was taken by Sardar Patel; Gandhiji approved of it, but asked that the funds for this purpose be raised through voluntary donations, rather than an outgo from the government exchequer. This advice was followed, and K.M. Munshi, a minister in Nehru’s cabinet, spearheaded the raising of funds and the rebuilding of the temple.

The same model is reportedly being followed for the Ram temple. The cadres of the RSS, the BJP and the Vishwa Hindu Parishad, are in the forefront for raising funds from the public. Many ordinary Hindus are more than willing to make contributions. Many non-Hindus may also be willing to contribute. So long as this entire exercise is carried out voluntarily, on the bedrock of genuine public support, it should pose no problem.

But there are disturbing stories doing the rounds of coercive methods being employed.  It has been reported that bands of “bhakts” are combing residential areas and housing societies asking people to donate, and judging them by their response and the quantum they give. It has been reported that stickers are put on the doors or entrances of those who have paid, thereby marking out those who have not. In a close-knit residential habitat, this identifies people who are not “adequately” Hindu, or sufficiently demonstrative about their devotion to Lord Ram. Such people then face social ostracisation, and are portrayed as betrayers of the faith.

If these stories are true, it is a matter of deep concern. The noble cause of building the temple cannot be sullied by mob intimidation bordering on extortion. Most Hindus hold Shri Ram in great reverence, and may wish to donate; but those that do not want to hand over cash to people they don’t know, or are unsure about their credentials, or unconvinced about the accountability of the money they give, are entirely free not to donate, and cannot and should not be penalised for it. The use of stickers or crosses to identify those who do not comply has very ominous implications.

Besides, Hinduism by definition is a religion of choice. Even in temples, there is no compulsion to put money in the donation box, however prominently it may be placed. Many Hindus worship Rama; for others, the subject of devotion is Shiva; and, for still others it is Devi. At one level, of course, all Hindu gods stand for that one divinity which is omnipresent and indivisible.

This is the Nirguna — attribute-less — Brahman. But Hinduism consciously derogates this pervasive cosmic consciousness to the Saguna or attribute-full level, to enable devotees to worship a more accessible god. At the saguna plane, each Hindu is free to choose more than one god, or elevate any one of them to primary status. For instance, in West Bengal, a great many people are devotees of Durga. Is there anything wrong if a Hindu in Kolkata chooses to donate a part of his meagre disposable income for Durga Puja rather than a temple for Rama?

Moreover, what kind of precedent does such an exercise set? Today, the aim is to raise money for the Ram temple. Tomorrow, if the same cohort comes around to ask for money to celebrate the birth of Rama, Ram Navami, who will stop them? If at Dussehra, the same gang fans out to raise money for a yatra or a function, how can ordinary Hindus, afraid of being marked out for not being “sufficiently devotional”, resist their demands? Even powerful politicians have spoken out openly against the manner in which money is being asked or. Fear and unlawful pressure cannot be a basis for religious or spiritual pursuits.

The real danger is that Shri Rama, the compassionate (deen dayala) merciful (kripalu), and the epitome of rectitude (maryada purushottam), is being used as a means to make Hinduism a prescriptive religion. Such a development is mutilating to the cerebral essence of Hinduism. The tragedy is that those who assume to dictate to other Hindus on how they should behave in order to be “good” Hindus, don’t know the fundamentals of Hinduism in the first place. More often than not, their evangelical illiteracy is orthodox, upper-caste, patriarchal and ritualistic. Little would they know that Hinduism allows for Hindus to be atheistic, pantheist, monist, polytheist, agnostic, animist, or any combination of the above; and, at the level of philosophy, Hinduism is more than happy with those who see God everywhere or nowhere and do not even wish to visit a temple.

Shri Rama’s aura should not be sullied by the taint of money and politics. It would have been much better if the government had issued explicit instructions that donations for the Ram temple, by those who wish to make them, would only be valid by online transfer, with an electronic receipt. It would have been good, too, if the government had set up a more transparent mechanism for donors to know how their hard-earned money — in times when petrol and diesel prices are skyrocketing — has been utilised for the construction of the temple. Herds of people of a particular political orientation, roaming the streets and neighbourhoods demanding money with little accountability, is not something that Shri Rama would have wanted for his temple.