The Pulwama massacre illustrates how porous our security architecture remains to domestic and external threats. 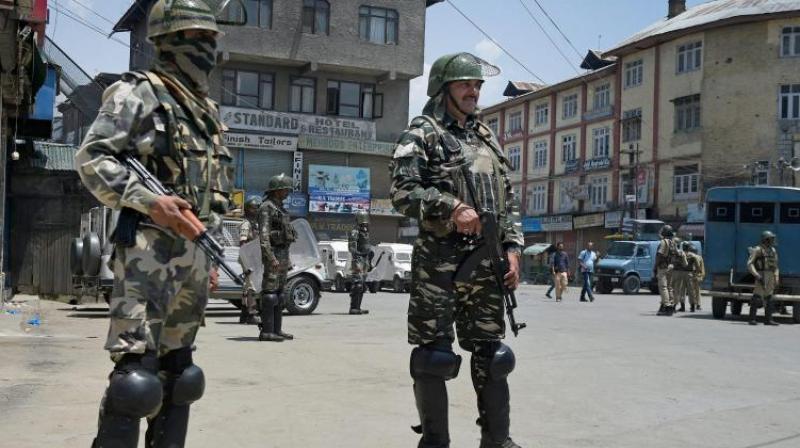 he geo-politics of containing the enemy through a simmering, low-level, proxy war of attrition is a fine art. (Photo: PTI)

The Pulwama massacre illustrates how porous our security architecture remains to domestic and external threats. We live in a tough neighbourhood. The geo-politics of containing the enemy through a simmering, low-level, proxy war of attrition is a fine art. Throwing money at the Central Armed Police Forces and the growing the number of boots on the ground is, at best, empire-building. Over the past decade till FY 2019, the outlay on the Central police forces grew at double the rate of growth for the armed forces. The latter and related intelligence agencies must remain the core of a hi-tech security cordon aided by “big data” analytics and artificial intelligence.

Regional politics is not in our favour. With the United States withdrawing to navel-gazing at home and Russia focused on consolidation, the “Great Game” is open for China to play, at leisure, in the Hindu Kush and the plains below, including through proxies. Larger budgetary allocations can take this quiet war of attrition beyond our borders to the source of the problem.

And here is the worry. Is our economy resilient enough to generate the additional resources required? A perfect storm is gathering — of escalating external threats, a constrained space for economic growth with the slowing of the world economy and heightened protectionism, and don’t forget the accumulating unmet demands of domestic investment in transportation, agriculture, energy, education and health.

India is by no means a pushover. Our diversified economy has grown at above 6.5 per cent annually in real terms over the past decade, though the data trail has now become murky. Much angst and effort is spent on achieving and rebutting the random, spiky, high notes of nine and 10 per cent growth, whilst scant regard is paid to the “platform approach” of aiming higher only once we achieve a demonstrated, decade-long record of consistent growth, say, at 7.5 per cent, to be successively increased, over the next 20 years, to 10.

Sustainable levels of growth trump temporary highs. Sustainability, as we approach the year 2100, will be measured by our ability to cap carbon emissions per unit of GDP. Strategic investment to release trapped, large pools of potential growth will be more important than the large-scale capital-intensive gameplan that China has followed. Growth is not lways an outcome of investment. Capital is easily misallocated and wasted if it is cheap, with no accountability for debt servicing. Our humongous stressed bank loans should have taught us that. The “green” growth, which our public budgeting process ignores, is that of liberalising ineffective “planning era” controls. Oddly, agriculture — always privately owned and managed even as public industrial empires grew to control around 40 per cent of industrial value-add — has remained tightly-controlled. Industry’s 1991 moment of liberalisation was never extended to agriculture.

Business decisions like where a farmer can sell produce, cross-state sales and exports are all tightly controlled, as are imports. The 6,000-odd agricultural markets across India need to be modernised in a standardised manner to provide similar, high-quality transportation, storage, grading and assaying with end-to-end digital connectivity across markets, banks and warehouses. This work is on, but needs speeding up. The high-level goal should be that one half of the retail price of agricultural products is received by the producer as against around one quarter today. The key to ensuring a higher share for farmers is to minimise loss and wastage (15-30 per cent) in the supply chain. Experienced, private, deep-pocket e-commerce retailers in the agricultural value chain can garner efficiency gains quickly.

The practice of public procurement at an administered minimum support price must be phased out. It benefits only the bigger farmers; incentivises location-blind, unprofitable farming (rice in Punjab); encourages wasteful use of electricity and scarce water resources. The pilot of direct benefits transfer (DBT) to the bank accounts of “farmers” started by Telangana, Odisha and mainstreamed by the Union government in the FY2020 Budget is an efficient substitute for the existing subsidies on electricity, irrigation, fertiliser and crop price support mechanism. All agricultural inputs and produce should be subject to market determination of price with effective autonomous regulation to ensure quality, choice and competition in supply.

Achieving this reallocation of public resources can put at least an additional two per cent of GDP (saved from the rationalisation of agricultural subsidies provided by the Union and the state governments) or Rs 4 trillion in the hands of the bottom 70 per cent of small and marginal farmers, agri-tenants and workers at the rate of Rs 40,000 per family for 100 million rural families every year. The real problem is political. How does a democratic process induce “kulaks” — large farmers with deep social roots, embedded social entitlements and the arbiters of rural votes — to loosen their control?

Agriculture represents the “low-hanging fruit” of trapped “green” growth. All it needs is for the government to remove its blinkered approach to development which focuses on what are globally perceived as “sunrise” industries and urban spaces and think contextually. The broader “green” agenda is of enlarging the reach of electric transportation, including freight by rail, investment in battery technology to support the targeted expansion of renewable energy penetration, business innovation in the co-use of natural gas for district cooling, lighting and for fuelling industry, clean coal and gasification. The challenges are scientific, technological and commercial. Only savvy scientists, technologists and business folk can take these critical missions to completion.