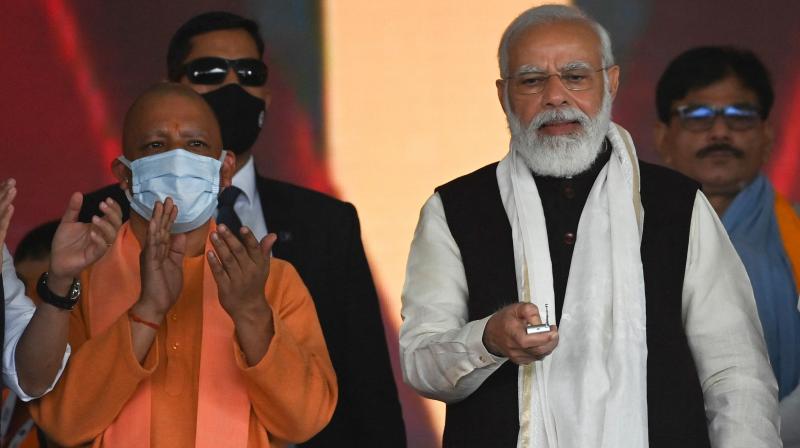 It looks like that the Yogi Adityanath government in Lucknow and the Narendra Modi government in New Delhi were waiting for election time to usher in the goodies, as it were. (AFP)

There is a feverish inauguration spree in Uttar Pradesh in the run-up to the Assembly elections early next year. Prime Minister Narendra Modi had inaugurated nine medical colleges in the districts of Siddharthnagar, Etah, Hardoi, Pratapgarh, Fatehpur, Deoria, Ghazipur, Mirzapur and Jaunpur, all in Purvanchal, the eastern part of the state, on October 25. Of the nine, the Central government had financed eight and the state government one in Jaunpur. The new colleges attached to the district hospitals have created 2,509 beds, as well as jobs for 5,000 doctors and paramedics. The cost of construction of all the nine is Rs 2,329 crores. And in the same week, the Prime Minister had inaugurated other development projects worth Rs 5,200 crores, according to the Prime Minister’s Office (PMO). Then on November 16, Mr Modi inaugurated the 341-km Purvanchal Expressway with its 3.2 km airstrip for Indian Air Force (IAF) fighter planes to land, built at a cost of Rs 22,500 crores. The Prime Minister himself made a dramatic landing on the airstrip in a C-130 Hercules transport plane of the IAF. It is being touted as the lifeline of the undeveloped eastern part of the state. And on December 14, Mr Modi inaugurated the 500-metre corridor from the banks of the Ganga to the Kashi Vishwanath Temple, which has been expanded from 3,000 square feet to 550,000 square feet and a 24-building complex costing Rs 339 crores has been created. It was again a mega event in which the Prime Minister walked across the corridor carrying the Ganga water to the temple in colourful regalia. It is a shock and awe campaign all the way.

It looks like that the Yogi Adityanath government in Lucknow and the Narendra Modi government in New Delhi were waiting for election time to usher in the goodies, as it were. One would have expected these things to have been done in the five-year term in office of chief minister Yogi Adityanath. It is of course an instance of incredible political coincidence that the Kashi Vishwanath Corridor creating a straight path from the river to the temple, which was inaugurated in March 2019, a little before the 2019 Lok Sabha election, was completed a little before the Assembly election. The uncanny political timing cannot be faulted.

But we all know the old adage that all that glitters is not gold! The spate of inaugurations do not really speak of achievements, but it is a way of hiding the absence of achievements. Major development projects like expressways and medical colleges should be part of the governance scheme of things, and not a pre-election fireworks show.

During the 2018 Investor Summit, the Prime Minister, as was his wont, proclaimed that Uttar Pradesh should become a trillion-dollar economy and Maharashtra should become another trillion-dollar economy by 2025, that Uttar Pradesh and Maharashtra should compete. This is the characteristic Ted talk that Mr Modi indulges in, everywhere and every time, and tries to deflect a reality check. Chief minister Yogi Adityanath had sheepishly declared at a press conference on September 19 that his party had fulfilled all the promises made in the “Sankalp Patra”, or manifesto. And to prove his point, he mentioned the seizure of illegally occupied land worth Rs 1,800 crores, provided houses for 42 lakh people, transferred Rs 5 lakh crores to the needy through Direct Benefit Transfer (DBT), 4.5 lakh jobs were given to the youth, and paying over Rs.1.43 lakh crore compensation to sugarcane farmers in his tenure of four-and-a-half years compared to Rs 95,000 crore payment made between 2007-2017 by the Bahujan Samaj Party (BSP) and Samajwadi Party (SP) governments. Apart from the fact that the state has moved from the rank of 14 to two in the Ease of Doing Business index, there is no reference to the investment flow, nor to the state of manufacturing.

It is not the fault of Mr Adityanath and for that matter Mr Modi that both 2020 and 2021 have been lost years because of Covid-19. But they would not acknowledge the fact that it has been a massive setback to the economy, that the people have suffered. There is no reference to the plight of the migrant workers trekking from New Delhi and other major metropolises back to their villages, to the number of Covid-19 infections in the state, the number of people who died, and the vaccinations done.

But it is leaders of stature who are willing to talk about problems and how the problems are being tackled. Neither Mr Modi not the Yogi have the capacity to face up to the harsh reality. We know that Mr Modi went silent in May-June 2020 when the Chinese military incursion happened in eastern Ladakh, and he did not speak in April and May 2021, when tens of thousands of people had died during the second wave of Covid-19. Of course, the Prime Minister came forward to announce that the Central government would handle the vaccination from June 1 onward, and again when the billionth vaccination mark was crossed. But the two leaders were not to be seen or heard when they were needed the most.

Statistics indicate that there are 96 investment proposals worth Rs 66,000 crores since the outbreak of the Covid-19 pandemic, that American giants like Microsoft and PepsiCo are setting up units in the state worth Rs 2,866 crores, and that there have been 98 investment proposals in the manufacturing sector worth Rs 13,408.19 crores, that the unemployment rate in UP in July 2021 was five per cent compared to 10.7 per cent in Maharashtra and 7.5 per cent in Kerala. But the figures don’t indicate a rosy picture given the size of Uttar Pradesh’s population of 24.1 crores in 2021 compared to 12.47 crores of Maharashtra and 3.58 crores of Kerala. Uttar Pradesh’s GDP in 2021 was Rs 17.05 trillion compared to Maharashtra’s Rs 32.24 trillion and Kerala’s Rs 9.78 lakh crore.

We have been told time and again that elections are not won or lost on economic statistics, they are won by powerful messages and that Prime Minister Narendra Modi is a past master in messaging. It is a truism that is tested in every election. Sometimes people are swayed by spectacle. At other times, reality bites and they vote with their feet. Loud ideologues are quite convinced that their side will win and that reality is an illusion.