Bihar is the only state in north India, besides Jammu and Kashmir (now a UT) and Punjab, where the BJP has not had its own chief minister 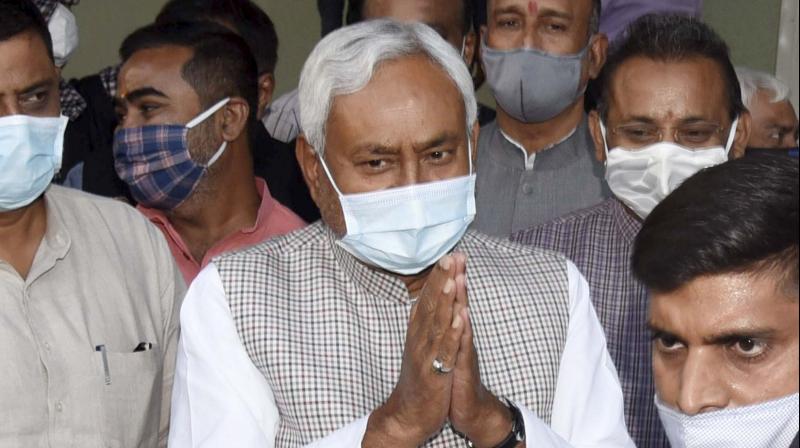 In Bihar, the BJP is the new regent to a tired, jaded, ruler -- Nitish Kumar -- whose authority after his Janata Dal (United)’s below-par performance in the recent Assembly election has dimmed to the level of inane formality. The saffron party is thus well placed now to advance its mentor RSS’ disintegrative social agendas in Bihar, with the chief minister being the rubber stamp, so besotted is he with the mere idea of being CM even at the cost of his self-esteem.

Whether the BJP is actually able to gain its ends in the foreseeable future will of course depend on many imponderables. But the current situation doesn’t bode well for Bihar. The state’s governance systems have long been a wreck. Its finances are in a pitiable state due to long-standing disregard by the Centre (despite the so-called “double-engine” government), and the state is a byword for deficient revenue-earning capacity.

Besides, as a party the BJP -- the regent -- typically takes the wrong turn on serious matters of governance at the Centre and in the states where its writ runs. It has been content, in the main, to play up social faultlines to score at the ballot box and then to politically persecute opponents in disregard of the law, common decencies and democratic culture. It rules through sloganeering. When it puts its best foot forward, it comes up with “love jehad”, the CAA, triple talaq, and so on. What can Bihar gain from such a mindset?

India’s poorest state is truly in an unenviable position when a party like the BJP is to the fore and the CM is only too conscious that his best fate may lie in signing on the dotted line, quietly. For all the ear-shattering din of “vikas” -- or development -- emanating from BJP’s most important leaders, Bihar’s economy and Bihar society appear poised to plunge, although there will be rallies declaring victory.

Bihar is the only state in north India, besides Jammu and Kashmir (now a Union territory) and Punjab, where the BJP has not had its own chief minister, either winning the state outright or having sufficient clout in a ruling alliance. In this quest it has been thwarted yet again. This must rankle the party’s leaders.

In the recent election, the BJP evidently worked to a plan which it thought would give the party its first CM in Bihar. It seemed clear to everyone that it set up the LJP’s Chirag Paswan, a NDA ally, to cut Mr Kumar’s votes so that the JD(U) leader was denuded. That game has largely succeeded, although Mr Kumar was humiliated but not entirely defeated. What did not succeed, though, was the calculation that the main Opposition party, the Rashtriya Janata Dal, led by jailed top politico Lalu Prasad Yadav’s greenhorn son Tejashwi, would be sent packing in the election. The opposite, in fact, happened. Tejashwi played what is quite possibly the most spectacular innings in recent memory for an untested captain, taking the battle to the BJP, JD(U) and LJP, in the process reaching new heights of endeavour.

He refused to live in the past, he showed energy, and he marshalled his resources and his coalition partners with aplomb. In the end his party won more seats than any other party and bettered its polling percentage by as much as five per cent compared to the 2015 election, which the RJD had fought under his redoubtable but controversial father. The BJP came up next, having dropped five per cent of its vote share, although this time it fought in an alliance with Mr Kumar, rather than independently.

The difference between the ruling NDA’s campaign and the opposing Mahagathbandhan campaign was stark. Within the NDA, the BJP played the communal metaphor to the hilt and made promises of “development” that didn’t ring true in light of the NDA’s abysmal performance in the past five years. Mr Kumar pleaded plaintively with voters to give him one more chance.

Tejashwi Yadav, in sharp contrast, spoke to the most pressing need of the young voter -- for jobs and a better deal. Some 20 seats were lost to his party or combine by a couple of hundred votes or less. The Election Commission could have been seen to be scrupulous, but remained satisfied with form, although the gap in votes between the winning and the losing side was only 12,000 in the state overall.

So, who won? This is apt to remain a debate and a source of deep contention in the days ahead in case the NDA’s opponents go on the warpath. They boycotted the swearing-in ceremony of the CM and his Cabinet colleagues. That means Bihar’s polity is on notice.

The BJP’s core objective of having its own chief minister in Bihar remained unfulfilled in this election. Had the people of Bihar rejected Tejashwi Yadav in the manner that the BJP might have hoped, and the JD(U) had sunk a little lower in the tally, the saffron party might have hoped to win between 90 to 100 seats when the winning mark is 122. Since the BJP’s middle name is “defection”, the party might then have thought to make up the rest by breaking other parties through money power and using the state police as it personal army.

For now, however, it must remain satisfied playing regent. But in the absence of a mandate, this is still an enviable position to be in. After all, the NDA has won state power, technicality or not. The CM will have to sign on the dotted line as told and take the rap when things go wrong, unless even he turns. He may rest assured that the BJP will play both tough and smart with the full force of the pliant media behind it.

Right away, the saffron party sent the tallest Bihar BJP leader, the urbane Sushil Kumar Modi, Mr Kumar’s deputy CM of 13 years, home. Although from the RSS cadre, he was thought to be too close to the CM. So, he may not have been the best hatchet man. Out he went and the BJP appointed two nonentities as deputy CMs. With such ruthlessness on view, the CM had better watch out. The BJP will tolerate no demurrals as the state gets to be governed through remote control from New Delhi, with the capital of the Mauryan empire taking a long holiday.