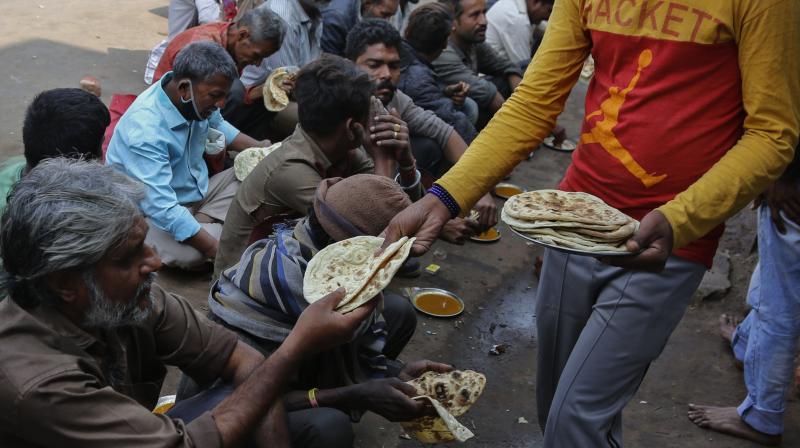 In 2015, India’s ranking on the Global Hunger Index was 55. Last year, in 2020, it fell by 39 places to land at 94. India went behind Pakistan, Bangladesh and Nepal. This index tracks undernourishment, child stunting (low height for age), child wasting (low weight for age) and child mortality (number of children who die before the age of five).

At that time, the government did not accept the data (which is collected mostly by agencies linked to the United Nations and the World Bank). In Parliament, the government had offered an unusual defence of its performance. Agriculture minister Parshottam Rupala said that in India “whenever a street dog gives birth in our village, even though it bites, our women provide them with sheer (sweet dish). So… we should not be sensitive to such reports… As far as these surveys are concerned, even healthy and strong children are counted… there should be awareness in society, our dynamic minister Smriti (Irani) ji has started a Jan Andolan, and 13 crore events have been done”.

Now this year, India has fallen another seven places to land at 101. Only 15 nations like Afghanistan, Somalia, Yemen and some other African countries are worse off than India. This time the government has again refuted the finding that the proportion of undernourished Indians has gone up from 14 per cent to 15.3 per cent. The government has said: “The report completely disregards the government’s massive effort to ensure food security of the entire population during the Covid-19 period, verifiable data on which are available. The opinion poll does not have a single question on whether the respondent received any food support from the government or other sources. The representativeness of even this opinion poll is doubtful for India and other countries.”

The government appears to be saying that it is doing its job by providing free grain (five kilos of rice or wheat and one kilo of dal) to 60 per cent of the population, or over 800 million people. This is true, and it has been doing this since the past year. The question then is why are so many Indians queueing up each month for free rations? The answer can only be that they are hungry, and need it.

As I wrote last week, the Indian government’s own National Family Health Survey of 2019-20 says that things have deteriorated on the malnourishment front. In fact, in Assam, Gujarat, Karnataka, Maharashtra and West Bengal, a higher percentage of children were found wasted in 2019-20 compared to 2005-06. This means that 15 years of progress has been ceded.

More than half the surveyed states reported that every third child below the age of five is suffering from chronic malnourishment. The government’s survey put out data for 22 states and Union territories. Its analysis of 10 major states showed that anaemia among children was higher in all the 10 states in 2019-20 compared to 2015-16. In seven of the 10 states which were analysed, a higher percentage of children were underweight (low weight for age) in 2019-20 compared to 2015-16.

This is a crisis that we need to first acknowledge and then work on. It is a difficult problem and will require the Union and state governments as well as civil society, meaning NGOs, to work together.

What is happening instead is that the Government of India has become defensive about every finding that shows a deterioration in governance.

When the Economist Intelligence Unit Democracy Index showed that India had fallen by 26 places from 27 to 53, the government refused to engage on the subject in Parliament. It said the issue is “very sensitive in nature” but also “trivial”. The United States Commission for International Religious Freedom last year marked India as one of the 15 nations globally as “countries of particular concern”. This was because the minorities in India were under assault. The government said that “its biased and tendentious comments against India are not new”. This year again the USCIRF has returned the same findings, retained India as a country of particular concern and recommended sanctions against some Indian individuals. When Freedom House demoted India from being “free” to “partly free” and Jammu and Kashmir from being “partly free” to “not free”, the Indian government said that “the political judgments of Freedom House are inaccurate and distorted”, and “for example, on the Covid-19 situation, there is a widespread appreciation in the world of our response”.

With every new report coming out which shows that things are slipping, we have become creative in trying to show how everyone else is wrong. When the Global Terrorism Index showed that India was stuck as the eighth most affected nation on earth, the Niti Aayog questioned how the organisation could “provide country-wise national peace reports with just 24 staff members and six volunteers”.

On four dozen indicators, India has fallen since 2014. Our response in all of these has not been to engage with the facts as many other nations have done. Our response is to say that the findings are wrong because under this government, India can simply do no wrong.