In India, we have countless award-winning thespians, not all of them professional actors. Some of our Nautanki Netas can beat them hollow! 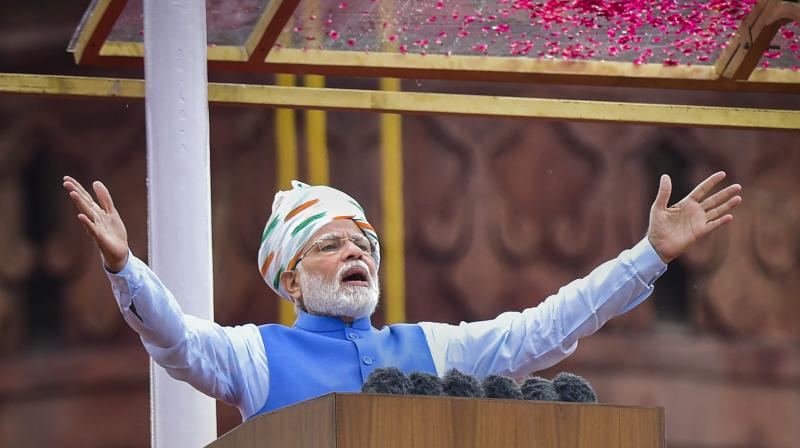 PM Narendra Modi gestures as he addresses the nation from the ramparts of the Red Fort on the occasion of the 76th Independence Day, in New Delhi on Aug 15, 2022. (Photo: PTI)

All the world’s a stage… and all the men and women, merely players…” wrote William Shakespeare (As You Like It: Act 2, Scene 7). It’s the opening line from the monologue by a character names Jaques (“The Seven Ages of Man”).  It is believed that one man in his time plays many parts. Like the great thespian Sir Arthur John Gielgud, who died in the year 2000, at age 96. Over his staggering eight-decade career, the English actor and theatre director performed a one-man recital of Shakespearean excerpts through the 1950s and 1960s, and had the rare distinction of having won a Tony, Grammy, Emmy and Oscar.  He played Hamlet, Prospero, and even Hamlet’s father! Earning the title of “the actor’s actor”.

In India, we have countless award-winning thespians, and not all of them professional actors. In fact, some of our Nautanki Netas can beat them hollow! Give them a stage, a mic, turbans, a historic backdrop and the nation as a captive audience — the dialogues flow like the Ganga in spate! Words pile up on more words, voice modulation happens, dramatic inflection, pauses, gesticulations — uffff — all this in order to underline the importance of the message. The message changes every year. The ego massage remains the same.

I am wrapping my head around our Prime Minister’s thundering speech on Independence Day as India turned 75, and thinking: “Wow! This is a full seeti-taali bhashan — John Gielgud ko bahut bada complex diya.” For starters — there is no grander, more stunning stage on earth than the imposing Red Fort in Delhi. A lone performer, impressively costumed, perfectly groomed and with his lines down pat (no cue cards, no teleprompter!), delivered an award-winning theatrical experience to the nation. No supporting cast to steal the show or share the spotlight with — and an audience of millions! It’s every actor’s secret dream — imagine a flawless monologue that lasted for 82 minutes. That’s some feat! It highlights our leader’s stamina, memory, fluency in Hindi, impressive body language, sartorial elegance (wah… that discreet tiranga Ikat turban), and, most important, the Ultimate Boss man vibe.

At the end of the marathon, the word “sankalp” stayed with me.

“Resolve” does not half convey the cerebral zabardasti of “sankalp”, a Sanskritised word beyond the grasp of most average desis like myself. However… I did feel short-changed by the predictability of the presentation on this momentous occasion — a day that will be remembered by all Indians as a huge milestone, celebrating democracy and freedom of our great nation for 75 years. Surely, we could have been more inclusive? Pumped up the pageantry several notches? Converted the Amrit Mahotsav into an exuberant mela for all citizens? Was it enough to mimic iconic anthems most of us had loved when there was a sense of freshness and deep emotionalism invested in creating them?

Who can forget the impact of “Mile Sur Mera Tumhara”, composed by Bhimsen Joshi in 1988, or A.R. Rahman’s rousing “Vande Mataram… Maa Tujhe Salaam” in 1997? What’s the point of spending crores of rupees on me-too versions? One of the producers told me about the single instruction that the team received from the ministry in charge before the filming started this year… the anthem had to end with a solo shot of NaMo. The rest was immaterial.

While we were busy exulting in our “Freedom at Midnight” mega celebrations, India’s most famous “Midnight’s Child” (Salman Rushdie) was struggling for his life after a vicious attack by a fanatic just as the globally acclaimed author was about to deliver a speech at Chautauqua, in New York state, where the writer has been living for two decades, and has been an American citizen since 2016. There was radio silence from our netas on this tragedy — nobody condemned the cowardly attack or offered solace to Rushdie’s kin. The “Godi Media” (thanks for coining the delicious description, Ravish Kumar!) ignored the stabbing, or made passing references to the brutality of the attack, which left Rushdie seriously wounded. Corporate India kept mum as well, even those industry leaders who have garnered an impressive number of followers on Twitter, mostly by singing hosannas to the Prime Minister. Some of them to be seen as liberal thinkers and supporters of the arts. Hats off to Dr Shehernaz Nalwalla, vice-president of the managing committee of Mumbai’s prestigious Asiatic Society, who announced a reading of Salman Rushdie’s Booker Prize-winning novel, saying: “This is India at 75… he’s a Bombay boy with a close connection to the city.” She added: “The choice was in line with the planned celebrations… and in solidarity for the freedom of expression, besides Rushdie’s ability to ‘immortalise India’ in literary writing.” Bravo!

I received calls from well-wishers cautioning me not to post anything even remotely supportive of Salman. “Look at what happened when J.K. Rowling expressed shock — she received death threats warning: ‘Don’t worry… you are next on the list’.” I asked myself just one question: had something this horrific happened to me or any other writer living in India, would Salman Rushdie have remained silent? Definitely not! As a former president of PEN America, and acknowledged as an ally of writers worldwide, what Rushdie has endured over decades of being targeted is nothing short of heroic. It is cowardly for the community to remain silent. But many would say, it may be cowardly, but it is also far more sensible… if you care for your own life!

Well, in this “Naya Bharat” that we are living in, there’s no knowing who might take offence or why, and promptly come after you. Playing it safe is a far better option, as I notice from the cautious, neutral, carefully worded texts I exchange with friends in the media, whose “comments” remain irritatingly bland and non-committal. Most friends have switched to “Disappearing Messages” as an option on their phones, as if a magic button will permanently erase any and every incriminatory response.

Meanwhile, I am thinking of all the lost creative opportunities the seventy-fifth Independence Day jamboree frittered away. India is filled with millions of highly skilled, supremely talented YOUNG people. I looked for them and didn’t find any in the hoopla. This was the largest canvas on which to project our cultural diversity and heritage — through our greatest human resource — the youth of India. Instead, we made it all about one single, middle-aged individual lecturing us on “sankalp” and promising miracles over the next 25 years.

Move over Sir Arthur John Gielgud — you have competition!