The locust years of our defence preparedness

The committee further noted that “the share of capital procurement budget in the defence budget has been continuously declining. 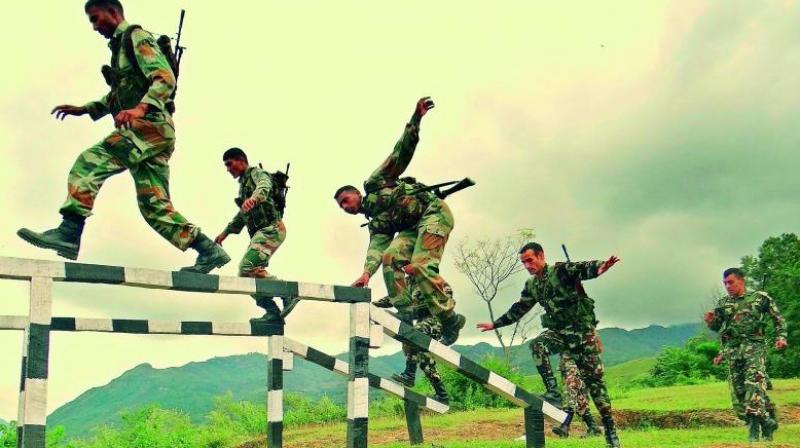 The Estimates Committee is one of the three financial committees of Parliament. It is currently headed by former BJP president Murli Manohar Joshi and has 16 BJP MPs as its members.

Please mark the fact that defence expenditure as a percentage of GDP is down to pre-1962 levels and the BJP/NDA claims that it has a muscular approach to the defence. However, this is only the beginning.

The committee further noted that “the share of capital procurement budget in the defence budget has been continuously declining. It has decreased from 39 per cent in 2013-14 to 34 per cent in 2018-19. In addition, procurement in the forces is not being made in accordance with the Long Term Integrated Perspective Plan (a 15-year perspective plan for each of the three services — Army, Air Force and Navy), but being adjusted as per budgetary allocations. Decrease in capital expenditure has an adverse impact on the modernisation process of armed forces, and can compromise the safety and security of the country.”

Please mark the words “compromise the safety and security of the country”.

In a report in March 2018 on capital outlay on defence services, procurement policy and defence planning authored by the parliamentary standing committee on defence, the indictment of the government was equally scathing. A BJP MP Maj. Gen. (Retd) B.C. Khanduri chairs the committee.

The standing committee noted, “The Vice Chief Of Army Staff (VCOAS), in his candid submission before the committee, claimed that the marginal increase in capital budget allocation for the Army had dashed their hopes as it was barely enough to cater to the rise in expenses on account of inflation, and did not even cater for the taxes. He further stated that allocation for modernisation in 2018-19 was insufficient to cater for committed liabilities, ongoing schemes.”

Please mark the words that marginal increase in capital budget allocation does not even defray the tax liability.

It further held, “The committee is aghast to note this dismal scenario where the representatives of the services have themselves frankly explained the negative repercussions on our defence preparedness due to inadequate allocation in capital head”.

Please mark the words negative repercussions on our defence preparedness.

Now cast a gaze around India’s periphery. An increasingly assertive Pakistan indemnified by China. Nepal pushed into the Chinese corner by an ill considered economic blockade. Chinese troops in Bhutan — the continuing build up in Doklam. An increasingly belligerent Yameen government in the Maldives has virtually read out the riot act to the Narendra Modi government by ordering it to withdraw India’s military choppers and personnel. Sri Lanka is firmly ensconced in the Chinese orbit — the Hambantota port being only one of its manifestations.

What did our muscular government do? It scrapped the Ranchi-based Mountain Strike Corps cleared in 2013 by the UPA government and partly raised as a counterforce posture to China.

On November 12, 1936, Winston Churchill during a debate in the House of Commons lamented about the wasted years from 1932-36 when Britain could have rearmed but instead appeased Nazi Germany. He said and I quote, “…He spoke of ‘the years that the locust hath eaten’. Let us see which are these ‘years that the locust hath eaten’ even if we do not pry too closely in search of the locusts who have eaten these precious years. For this purpose we must look into the past. From the year 1932, certainly from the beginning of 1933, when Herr Hitler came into power, it was general public knowledge in this country that serious rearmament had begun in Germany… During the last four or five years the world had grown gravely darker... We have steadily disarmed, partly with a sincere desire to give a lead to other countries, and partly through the severe financial pressure of the time. But a change must now be made. We must not continue longer on a course in which we alone are growing weaker while every other nation is growing stronger… What ought we to do? I know of only one way in which this matter can be carried further. The House ought to demand a parliamentary inquiry. It ought to appoint six, seven or eight independent members, responsible, experienced, discreet members, who have some acquaintance with these matters and are representative of all parties, to interview ministers and to find out what are, in fact, the answers to a series of questions; then to make a brief report to the House, whether of reassurance or of suggestion for remedying the shortcomings. That, I think, is what any Parliament worthy of the name would do in these circumstances. Parliaments of the past days in which the greatness of our country was abuilding would never have hesitated. They would have felt they could not discharge their duty to their constituents if they did not satisfy themselves that the safety of the country was being effectively maintained”.

Given that numerous parliamentary committees headed by very experienced members have red-flagged the tardy state of our defence preparedness, members of Parliament cannot just sit back and let things slide. A joint parliamentary committee must immediately go into the reasons for this decay otherwise for these locust years of India’s defence preparedness from 2014-18 the cost may have to be paid in Indian blood.