J&K bonds with India may deepen over time

Kashmir has this instant ability to exclude everything except the known and the immediate. 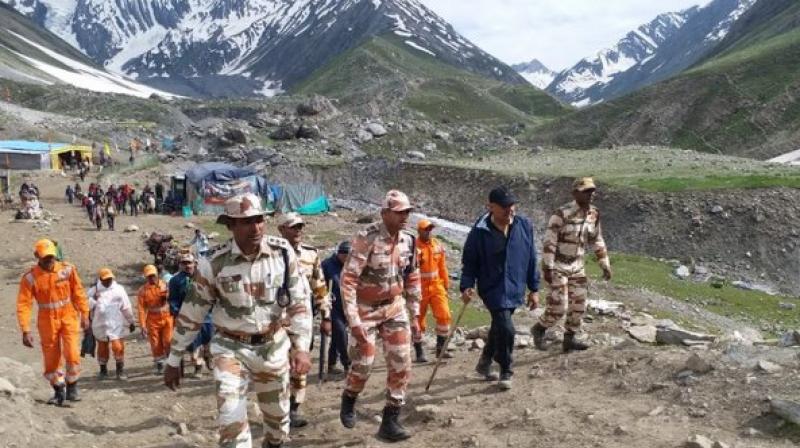 Battle-ready BSF and CRPF jawans line Srinagar’s main roads for the Amarnath Yatris. None of this is necessary, they say. (Photo: ANI)

It’s an ungodly 4 am as our shikara spears through the shimmering beauty of the Dal Lake — the rush of breeze a blessing after an unexpectedly still and warm night. Warmer summers and colder winters are a reminder that climate change, the silent killer, is not far off.

A shikara lurks ahead, amid the shadowy rushes and draws alongside as we pass. Greetings follow as does the subtle pressure of someone paddling alongside with a beguiling smile, hooded, watchful eyes, offering you flower seeds and bulbs — the latter at Rs 55 a pop. Amazon tells us this is outrageously expensive. Yet we choose black and blue peonies, which we are assured will grow well in hot and dusty Delhi. We choose to believe that to help the economy and show this anonymous Kashmiri that “Indians” don’t bargain. It’s a good feeling when he leaves with a cheery khuda hafiz and our cash in his strongbox below the floorboards of his canoe.

Kashmir has this instant ability to exclude everything except the known and the immediate. The economy doesn’t actually need our help. Judging from the number and high quality of new houses and cars, conflict has served the entrenched elite well. The Centre — always India, never Delhi — subsidises Jammu and Kashmir. But much is spent unproductively just to keep the simmering “freedom struggle” aka “militancy” at bay.

Kashmir was cosmopolitan even before its Hindu monarch acceded to India in 1947. Orchard-owning Kashmiri business elites traded the local produce — exquisite shawls, carpets, handicrafts, fine wool and saffron -- far and wide. This is a deeply multi-cultured land, envied for the bounties nature has bestowed on it.

It was Gulab Singh, an “Alexander” like Dogra, a royal scion, fortune and fame-seeking general who assisted Maharaja Ranjit Singh, Sikh grandee of the Lahore Durbar, to extend his empire westwards, with tacit consent from the British. As a return gift, in 1822, he was recognised Raja of Jammu, his own ancestral property. He expanded his empire to Gilgit and Ladakh via conquest but was beaten back from Tibet. Kashmir continued to be managed, directly from Lahore, till the rapid disintegration of the Lahore Durbar after Ranjit Singh died and the British defeated the Sikhs.

In 1846 Raja Gulab Singh bought the Kashmir Valley from the British. And thence the anomaly of a Hindu raja ruling Muslim subjects; the integration of the valley with Punjabi land and business elites and the continued visible presence of intrepid Sikh businessmen in Srinagar.

By first light, we are gliding towards a fishpond of shikaras criss-crossing each other endlessly with synchronised ease. This is one of the dawn floating vegetable markets. “Zemindars” and bulk buyers glide about in their laden shikaras seeking each other out. It’s frenetic. Deals are quickly struck for lusciously red tomatoes and meter-long plump lauki. Ringed around the edges are the more cumbersome canopied shikaras of tourists, foreign and Indian, who watch discreetly. A synchronised sequence of “floating shops” glide up to each tourist boat offering kahwa, cookies and sweets, Girda (Kashmiri salted flat-bread) and saffron, the antidote for all ills.

As the market winds down, the floating shops come alongside for a chat. The conversation drifts to hopes and aspirations. There is deep distrust and contempt for politicians of all shades. These tradesmen live alongside their “floating gardens” — thatched and bunched grass and soil — which choke the waterway between the Dal and Nagin Lakes. Leasing 500 sq. m. of this “floating garden” costs Rs 1,000 per year, with an extra Rs 500 as “transaction costs” for the revenue authorities.  Nobody is visibly poor. Much of their business comes from foreigners — including Chinese tourists — one of whom is sketching the scene skilfully.

Things get a little heated while probing below the amiable surface. These “nowhere people” are deeply unhappy at their fate hanging by the slender thread of geopolitics. India seems far too underdeveloped and its politics too complex to hitch their star to. These millennial “mobile merchants” are avid followers of politics. There is some grandstanding — a daredevil wants to reach Iran overland and then to Canada. Others have more standard aspirations — a “good” job to get away from the rigours and meagre returns from farming; peace and freedom. Freedom from what? From the “Army”, of course, they respond.

Battle-ready BSF and CRPF jawans line Srinagar’s main roads for the Amarnath Yatris. None of this is necessary, they say. We aren’t fools, we live off tourism and no one will harm a tourist! We are not like the illiterate “goats” of the 1990s. Our “freedom struggle” is only versus India, not Indians. The group loses members, as things seem to have got too far, too fast in the quiet intimacy of dawn. The firebrand apologises if he has hurt us. We are made of sterner stuff, we tell him, and point out that mistakes happened on both sides — Kashmiri Pandits were forced into exile in 1990. That was bad, he says. It shouldn’t have happened. Look at the Sikhs, he says, they stayed and prospered.

We leave Srinagar after a finger-licking wazwan at Ahdoos, and travel south to a village in Budgam district, where a young Srinagar entrepreneur, with a sales outlet on posh Polo View Road, grows lavender. The road is excellent and paved nearly all the way to our host’s house. However, conversation is cautious here and rarely goes beyond idle chatter about the weather, the state of the crops and the problems of small entrepreneurs. We walk to the lavender fields and watch the traffic at Srinagar International Airport, 10 km away as the crow flies. Which international flights land here, we ask. Only Haj flights, they answer.

The government has invested heavily in school buildings. People prefer private primary schools but switch to secondary government schools. Engineering, computers and medicine are the prestige occupations here. No one envisages a future for farming.

A passion for exceptionalism runs deep. How this mixes with the dominant, centralising strain of pan-Islamism remains unclear. Pakistan and now China loom large on people’s minds, as useful tools to leverage future political gains.

Kashmiris take happily to victimhood. It would help to get out of its fishbowl and deepen links beyond the narrow prejudices of North India.  India’s growing international and economic stature is a glue to remain bonded. These bonds can only deepen over time.