Dev 360: Navigating uncertainty in the time of coronavirus

Let's not be fixated on daily 'numbers'; let's look at preparedness 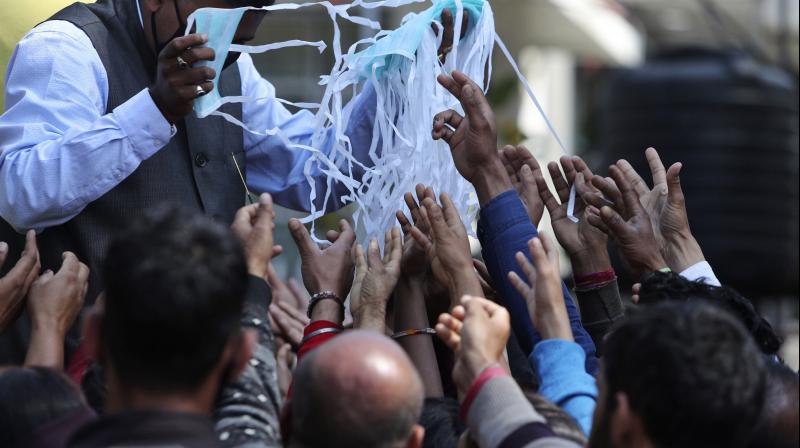 A volunteer distributes masks outside a government hospital as a precaution against COVID-19 in Jammu on March 16, 2020. (AP)

Let us face it. There are no certainties in the time of a pandemic. Perhaps the only thing one can say with confidence is that while life in the shadow of Covid-19 is tough for everyone, the most vulnerable people will suffer the most.

In the United States, where  more than 100 people have already died, people are being asked to avoid large crowds, stockpile shelf-stable foods in case they end up quarantined, and stay home from work and contact a doctor if they are ill.

But many low-income people can’t afford to follow such advice easily; they are engaged in work that can’t be done remotely, and the majority of low-income jobs don’t offer paid sick days.

In India, the vast majority of people work in the informal sector. Millions are daily wage-earners who don’t get paid sick leave.

There is no playbook for Covid-19, a new virus for which there is no vaccine as yet.

How do we navigate uncertainty and turbulence in the days to come?

One way is to recognise that the pandemic is exposing every society’s weaknesses, be it in the developed or developing world.

We must not fixate so much on “numbers” on a daily basis. Instead, it is vital to take a hard look at preparedness and contingency plans in every sphere and plan for the worst-case scenario.

How is India coping?

The total number of officially confirmed novel coronavirus cases in India has crossed 138, out of which 114 are Indian nationals and 24 are foreigners. By the time this column is published, the figure would have shot up further in most likelihood. There have been three deaths in the country so far.

At 39 cases, Maharashtra looks like the worst-affected state, followed by Kerala. The higher numbers could mean that these states are doing a good job in diagnosing infected cases.

The Indian Council of Medical Research (ICMR) says there is no evidence that “community transmission” has taken place till date. India is ramping up laboratory capacity and gearing up for more tests.

This is the time to look at some of the prickly issues which will be key to how India manages Covid-19.

Take containment strategies, for example. These include “social distancing” measures as well as quarantine measures -- both at home and at the government's isolation centres. These are meant to check the spread of the disease among the community.

But there are daunting challenges here, and not just of ensuring hand-washing with soap on a mass scale.

There have been several reported instances of people suspected of having the coronavirus infection in the country running away from quarantine facilities. Eleven persons who were kept in isolation wards, and whose test results were awaited, fled from a Navi Mumbai hospital.

In Mirzapur, Uttar Pradesh, a man who had been admitted to the isolation ward of a hospital after he complained of fever and throat pain escaped through a window. He was intercepted and brought back. In an unusual move, the Maharashtra government has decided to “stamp” behind the left palm of all persons who have been asked to be in “home quarantine” in the wake of the coronavirus outbreak.

All these incidents point to several disturbing realities. Many people harbour grave doubts about the quality of healthcare in public hospitals and there is acute fear of social isolation and stigma.

Very few states have a public health system that inspires trust in the public.  The quality of hygiene in many quarantine facilities leave much to be desired

But fear and lack of trust can have devastating consequences for public health.

Then, there is the issue of stigma.

Across the world, there have been several instances of racial slurs directed at people of Chinese origin just because Covid-19 originated in Wuhan, China.

Prejudices are tumbling out in India too. There have been several reported instances of people from the Northeast being harassed and called “Coronavirus”.

It is vital to learn from the HIV and AIDS epidemic and fight fear and stigma with solidarity.

India has to improve its public health facilities drastically so that people are not terrified by the idea of being in isolation wards in government quarantine facilities.

Equally, we must realise that people are unlikely to come forward to report symptoms if they do not trust the system or are afraid of being stigmatised.

Finally, there are the critical issues of capacity and health security. The health authorities say the government is expanding the number of laboratories that can test patients for Covid-19.

In the time of Covid-19, it is important to bear in mind that there can be formal and informal barriers which impact supply chains.

“Not every nation produces the medical supplies needed to tackle the coronavirus. Those that do can still face shortages as health care systems come under pressure,” pointed out Global Trade Alert, which monitors protectionism.

“Worldwide, there are 25 import or export restrictions on medical testing kits as of now. Nineteen relate to tariff increases,” says Simon Evenett, professor of economics at the University of St Gallen, Switzerland, and Coordinator of Global Trade Alert.

Availability of testing kits is just one element of pandemic preparedness.

“Community spread would involve older patients who are at higher risk. This would increase the demand for intensive care, including ventilators. The experience of Hubei and Lombardy regions provide an indication of the number of intensive care beds needed: roughly 10 per cent of the total numbers infected. Creating the facilities take time. The government may need to identify buildings, procure oxygen cylinders, masks, cannulas and ventilators and recruit personnel immediately,” points out Rajeev Sadanandan, former Kerala health secretary and currently CEO of the Tata Trust-funded Health Systems Transformation Platform (HSTP), in a recent article for the Observer Research Foundation.

“This may at worst be a wasted effort. But if support is needed, and not provided, it could lead to avoidable deaths, loss of morale of health workers and anger in the community,” adds Sadanandan.

These are wise words from a man who worked closely with Kerala health minister Shailaja at the time of the Nipah outbreak. The world applauded Kerala for the way it handled Nipah.