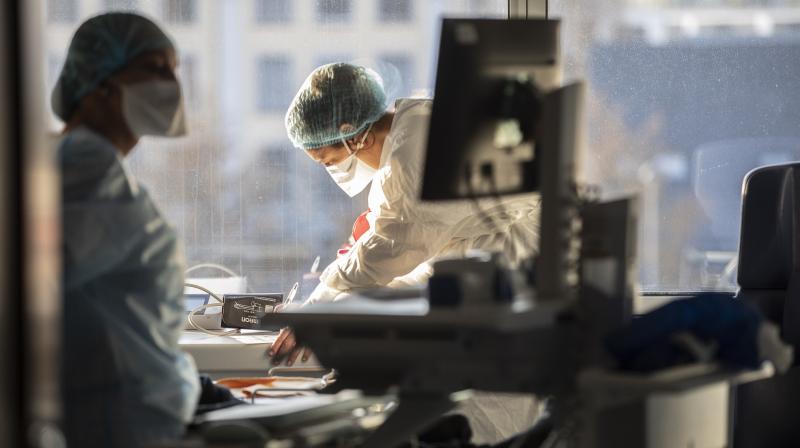 An overstrained medical system, the bartering and money chain, overworked doctors and nurses — and all this is without the additional destructive nature of the Virus — unless addressed now will cripple us totally as a society. (Representational image/ AP)

The last weeks of January were spent in and out of hospitals. A father with a sudden sickness was plunged into that artificial world of strange green lights and beeping machines. Add his family left trying to cope with a lung cancer diagnosis to his getting Covid via an ICU. It’s hard to keep your mind on track to make the right decisions as you plunge further into despair and displacement.

There’s something about the light itself in most hospitals that terrorises you. To be healed is the hope. To have your mind scrambled by a neon light that flashes you into submission is like an additional disease. My very intelligent, articulate Father became completely disorientated and lost, after his first four-day stint in a medical ICU. He had walked in to the hospital and, suddenly, he was unable to even walk to the bathroom?

The doctors, bless them, treated him like an idiot. They would not explain their own diagnosis or their suspicions to the patient but turned to his children. How does it help anyone’s health if they are separated from their loved ones and alone in a hostile environment full of people dying or in desperate straits, and not being told why?

All my father, 84, wanted to do was to get out. The doctors wanted to keep him in, even as they explained that our options were limited. To what end? More machines, less humanity.

To me, a cancer survivor, the pussyfooting around the word “cancer” was the first annoyance. Just say it. It’s a disease. We all know about it. It’s a leading cause of death globally. Not saying the word is not going to change its reality. Explain clearly and for god’s sake, explain it to the person who you think has the disease.
We managed to get Father out of hospital that time and he returned to his normal witty, larger-than-life self the second he was out in the real world. ICU psychosis, as someone within the hospital put it.

What about the Covid he contracted there?

Aah well, lots of shoulder shrugs, “that’s how hospitals are”. “These things happen.” “Occupational hazard. Madam, we’re probably all affected, but when someone tests positive, well, we have to follow the protocols.”

Luckily for us, the Covid was a-symptomatic, whatever I mean by “luckily” here because it was not long before our luck ran out. But until that happened, we went from frying pan to fire as the second hospital — which offered the cancer tests — had the most terrible Covid “care”. The a-symptomatic meant that we got Father home, we got a caring, wonderful nurse and we worked on getting him back on track. All we had wanted was a PET scan to confirm the cancer diagnosis. What we got instead was the virus and the bureaucracy around it.

We thus brought Father home for the first time and it was a good time. Walking, eating, better, in spite of a pigtail. Chatting, reading, even as the oxygen concentrators and cylinders took a bit of getting used to. But he and the rest of us soon became experts at that. It was not the dignified life he was used to, but it was better than lying alone in an ICU ward or alone in a room.

Through this, your mind plays tricks on you. He will get better; we will fight the cancer like I fought it, like my Mother did before me. Medical science has advanced so much. Through this, we know, we have seen first-hand what cancer can do, what the treatment can do. But can you give up hope? All we wanted after all was a PET scan so that we could understand the length and the breadth of the tumour.

We also knew that there’s a price to be paid for a lifetime of smoking. Father did not want to accept that, even though the chain-smoking had long stopped and in his own words, he was now a “bum”, cadging other people’s “fags”. The fights we had over this when I was a child. What use were those now?

We had to go back to hospital and this time, it was bad. One lung was non-functional, the second was struggling. The hospital which gave him Covid now refused to take him back because he had Covid. It was only the kindness of friends that got him back in, and the tremendous personal goodwill he built with everyone wherever he went. As our young nurse was furious and ranted about the impersonality and greed of insurance-based hospital care.

This time, we were cleverer. We spoke the tough words to the doctors who were too tired or scared to say them to us. We explained how impersonal ICUs were not where anyone wants to live their last moments. Isolation at 84, what does that mean? The room he was in had a wonderful view of forests and mountains. But the bed was pushed against the window so all the patient saw was a white wall. A design fatality rather than a design flaw.

We brought him home, knowing that we had no time. We talked and laughed and discussed our happiest times as a family. We never left his side for the 30 hours we had left with him. We knew we wanted him home a day earlier, he kept saying to the doctors “I want to go home NOW”, but they were scared. We signed those LAMA forms, even as they told us we were brave and we were doing the “right thing”. The irony of “leaving against medical advice” when the doctors applaud you for leaving against medical advice!

He left us, a life well lived, a family broken.

But I write this because we have learnt as a family that what we lack most terribly in India is geriatric care and an understanding of the last days of human life. An overstrained medical system, the bartering and money chain, overworked doctors and nurses — and all this is without the additional destructive nature of the Virus — unless addressed now will cripple us totally as a society. Many may have read Atul Gawande’s Being Mortal, but I have not come across even one medical person who has understood what Gawande wrote or tried to follow the examples given to increase understanding of what most of us will go through. We’re living longer thanks to medical advancements, but at the end of our days, are we living better?

If we don’t answer that question now, the answer will tragically forever be “no”.