Pavan K. Varma | Our duty is to put back nuance in hijab debate

The hijab dispute is now sub judice, and is being heard by the Karnataka high court 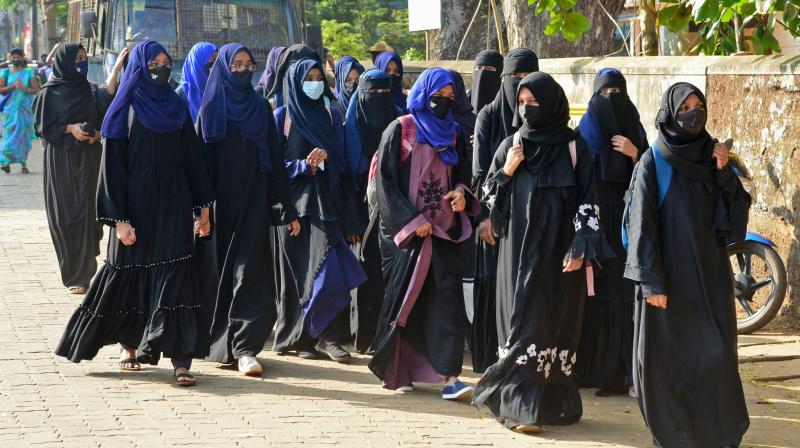 We can only hope that the judiciary will come up with a judgment that protects the rights of Muslim women while allowing the scope of change and reform that challenges patriarchy and liberates women. (Representational image/ AFP)

The hijab cannot be the symbol of Muslim women’s empowerment. It has no scriptural sanction in Islam, and must be seen as part of custom that has its origin in patriarchy, an instrument for the continued subordination of women to suit the misogynist viewpoint of Muslim men. To defend the rights of Muslim women, which is an entirely legitimate pursuit, should not, therefore, be conflated with the defence of the hijab.

Of course, Muslim women have the right of choice of what to wear. But that freedom of choice cannot be defended by blindly endorsing customs that are an instrument of their sartorial enslavement. Customs are important, but they are not sacrosanct. History is replete with enlightened changes to community practices which had otherwise become entrenched over a period of time for lack of scrutiny or interrogation, or because those whom such changes would benefit were not sufficiently empowered to change them. For instance, in the case of the hijab, it can hardly be argued that Muslim women were sufficiently empowered to do away with this retrograde practice in a male dominant society.

Besides, there is also the factor of reflex conditioning. If women are brought up to believe that certain practices are the norm, and any infringement is tantamount to heresy, and if their choices are determined by what men think is right, then their behaviour will continue to conform to a past that needs to be interrogated. This is a syndrome that can be observed in the way that women, influenced by their perceived notion of “correct” practice, behave. Often women themselves embrace their captivity, and enforce it on their own specie. Patriarchy benefits men; but women get co-opted into the structures reinforced by men to subjugate women. There are enough cases where elder women become aggressive perpetrators of outdated tradition, and seek to enforce it on younger women. For instance, the illegal practice of dowry has often the fullest backing of women, who are complicit in the torture and humiliation of brides for greater dowry.

The essential point, therefore, is that while women have the right of choice about what they wear, that choice does not originate in a void, and is a factor, very often, of regressive conditioning happily perpetrated by men. Women should be encouraged to question such choices, and choose what is in conformity with the dignity and equality that is their right. The perpetuation of the wearing of hijab is thus not tantamount to the empowerment of women, as certain liberals seem to believe. In fact, as has repeatedly been pointed out, a great many Muslim nations have done away with the hijab as an act of reform, in the interests of women, and in sync with the requirements of a modern society. Indian Muslims need to introspect on this.

Reform of custom that claims religious sanctity is not uncommon. In Hinduism for instance, the practice of Sati was abolished in the nineteenth century by the British, even though its votaries argued — wrongly — that it has religious sanction. The Manusmriti was used by a male dominant society to legitimise the subordination of women. The shastra — although not a consistent text — says at one point that “a girl, a young woman, or even an old woman, should not do anything independently, even in her own house. In childhood a woman should be under her father’s control, in youth under her husband’s, and when her husband is dead, under her son’s. She should not have independence”. Such an injunction obviously needs to be, and is being challenged today, not the least by women themselves. Women are also strongly contesting patriarchal stereotypes about chaste Hindu women, that seeks monopoly about how they dress, who they marry, what they drink, and where they work. Much more still needs to be done in Hindu society to grant women full equality. Certainly, tradition cannot be quoted, by men or women, to prevent this from happening.

An educational institution has the right to prescribe a uniform, to enforce uniformity overarching class, creed and caste distinctions. But in a country like ours, enlightened exceptions have to be made. For instance, Sikh students are allowed to wear the turban or a patka, within the structure of a uniform. Similarly, some concession could be considered for Muslim girls, in the nature of a headscarf. The limits of such deviations from the norm need to be negotiated in a sane manner.

However, the manner in which lumpen elements in saffron scarves shouting “Jai Shri Ram” jumped into the fray, is condemnable. How did they suddenly gather in such force? There must be a directing hand behind this quick and organised mobilisation. The BJP parivar, in Karnataka, and nationally, needs to answer this.

A matter that was being negotiated between Muslim girls and college authorities was deliberately communalised as a Hindu-Muslim confrontation. This is the least acceptable way to resolve such issues. Suppose there was a question pertaining to social custom within Hindu society, and hordes of Muslim men surrounded the deliberations shouting Allahu Akbar, would Hindus like it?

Politicisation at one end of the spectrum leads to counter politicisation at the other, leading to the involvement of political organisation like the PFI in support of the Muslim girls. A sensitive issue, that requires all sides to the dispute to seriously think and introspect, became unnecessarily a Hindu-Muslim dispute, quite conveniently for the BJP on the eve of the five Assembly elections.

The hijab dispute is now sub judice, and is being heard by the Karnataka high court. We can only hope that the judiciary will come up with a judgment that protects the rights of Muslim women while allowing the scope of change and reform that challenges patriarchy and liberates women. Meanwhile, liberal opinion needs to realise that this is a far more nuanced matter than black and white positions admit.