Pulwama’s aftershocks in run-up to 2019 polls

The Opposition parties must not only nail the BJP for its failures on the economic and social front, but also on the security front. 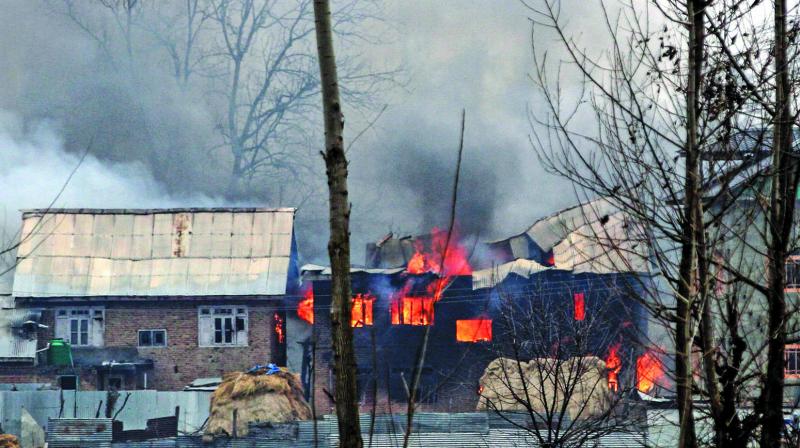 A house in which militants are suspected to have sheltered is in flames after a gunfight between militants and the security forces in South Kashmir’s Pulwama district, some 10 km away from the spot of the recent suicide bombing. (Photo; AFP)

Prime Minister Narendra Modi has spoken about the fire raging in his heart which was there in the hearts of the people in his speech at Begusarai in Bihar in the wake of the Pulwama terror attack, in which a suicide bomber killed 40-plus CRPF jawans traveling in a convoy from Jammu. BJP president Amit Shah had said in Guwahati: “We are not the Congress. We are the BJP,” indicating that the Narendra Modi government would respond to the terror attack with greater determination than a Congress government would have had. But at the government level, the Prime Minister said that the Army had a free hand to respond to the attack, and at a time of its choosing. And the government had also convened an all-party meeting in New Delhi on February 15, where the attack was condemned unanimously.

The BJP will not be able to resist the temptation to use the Pulwama attack, which puts the Modi government in the dock for the lapses of intelligence and the unguarded road movement of troops, during the election campaign and take credit for whatever retaliatory action that the Army will take for the attack. The BJP had brazenly used the surgical strike of September 29, 2016 in the Uttar Pradesh election of March 2017, along with the disastrous November 8, 2016 demonetisation move. The Opposition parties have no choice but to break the temporary political truce that was forged at the all-party meeting. And this is a fair battle tactic. It will be necessary for the Modi government to launch an effective retaliatory attack, which it would then use in the Lok Sabha poll campaign as its political trophy.

There have been, and there are many conspiracy theories in the air about how the Modi government would trigger a flareup on the India-Pakistan Line of Control (LoC) in Jammu and Kashmir and care would be taken that it does not spill over into the India-Pakistan international border, and that a government whose achievements have been modest and unimpressive would unfurl the standard of patriotism, which is the easiest way to tug at the emotional chords of the voters, to engineer an electoral victory in May. There is also the extreme apprehension on the part of the ideological opponents of Mr Modi and the BJP that the Prime Minister would defer the elections. It is easy to label Mr Modi’s opponents as hysterical because the Prime Minister has not really inspired confidence among his critics, and his own supporters, the right-wing zealots, are not unflinching votaries of democracy. This makes the fears of the opponents plausible, and even palpable.

Whatever short-term advantages that political parties may want to take from the India-Pakistan confrontation, the people are not as starry-eyed as they are made out to be. The majority of people are sad and angry that the CRPF jawans were killed in a terror attack, and they would support any counter-terror measure, but they are not going to sidestep the many other burning issues, both local and national. Only a major India-Pakistan war would make people forget the other issues, and by all rational reckoning a war is not going to happen. The armed forces would not want a war, and they would like to deal with the Jaish-e-Mohammed (JeM) at the local level. And there will be a major tightening of security precautions.

The Opposition parties are likely to feel defensive in raising the security failures of the Narendra Modi government, because the BJP will then unleash mob frenzy against innocent Kashmiris and Muslims living across the country, including in Jammu and Kashmir. But Congress president Rahul Gandhi will continue to hit the Modi government hard on the Rafale jet fighter purchase, and he will make the larger point that the BJP boasts about being ultra-nationalistic, but when it comes strengthening security it falters and dithers. And that is how it should be. The Opposition parties must not only nail the BJP for its failures on the economic and social front, but also on the security front. And the BJP should defend its record as best as it can. If the BJP leaders, and its cadres-turned-mobs, turn upon the critics as “anti-national”, it will be a violation of political protocol. The responsibility of holding the party cadres-turned-mobs on leash will lie with the party president, Mr Shah, and with Prime Minister Modi.

The 2019 Lok Sabha election is slated to be nastiest one ever, and the addition of national security will add an incendiary element to the toxic broth. India is a proud democracy, and it should not pass over in silence important issues like terrorism and Jammu and Kashmir. The UPA government of Dr Manmohan Singh was clear about terrorism, including “red” terrorism. The UPA’s Kashmir policy was pragmatic and calibrated and there was no unrealistic attempt to resolve the problem. But state governments were left alone to manage the situation. And the UPA handled Pakistan without engaging with it. The weakness of the Modi government is that it has not been able to decouple the Kashmir question from that of Pakistan. Second, it failed to leave the management of Kashmir to the local political leadership. There are many lessons that the BJP needs to learn from the Congress leadership in dealing with Pakistan. The main lesson is that do not make Pakistan the centre of your policy. The second is to build one’s military strength even though there is no likelihood of it ever being used against Pakistan. That is a deterrent in itself.