Overall, households reported that about 75 per cent children get some help at home in terms of learning support 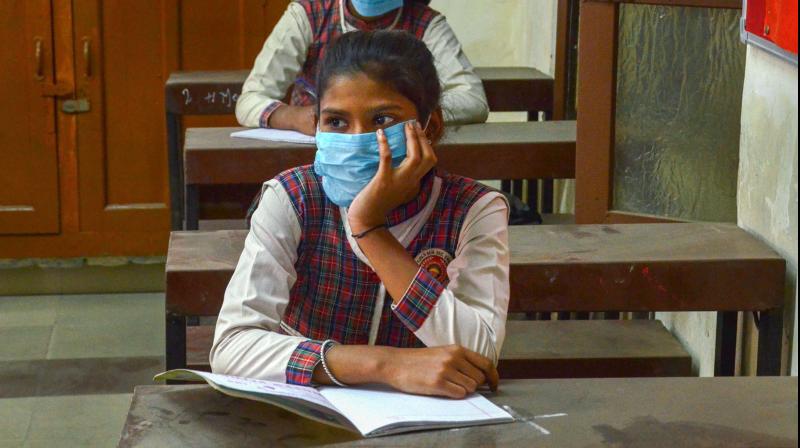 Students wearing face masks attend a class at a school that was reopened after closure for months owing to coronavirus pandemic, in Amritsar, Thursday, Oct. 22, 2020. Schools are being opened as per guidelines issued in Unlock. 5. (PTI)

By January 2021, schools will have been closed for almost 300 days. Even when school systems reopen, it will take time for parents to feel comfortable in sending children daily to school. The longer schools stay shut and the more uncertain we are about the next steps, concern grows about the impact and implications of what looks like a year-long closure.

Starting 2005, every year in mid-January India sees the release of the Annual Status of Education Report (ASER). From 2005 to 2014, the ASER report tracked the status of schooling and provided estimates of basic reading and arithmetic skills. After 2014, the nationwide ASER report is done every other year and in the gap year we look in depth at a specific age group. For example, ASER 2017 focused on the 14-18 age group, while ASER 2019 dealt with the 4-8 age group. The year 2020 would have seen the regular country-wide report. But given the Covid crisis, it was appropriate to change the focus and timing of ASER to explore what children were doing while the schools were closed.

There are several key features of the ASER architecture that are worth highlighting. ASER has always been a rural survey with information collected from households. The children’s sample is representative at the district and state levels. During Covid-19, where the only way to reach families was through phone calls, and it was essential to maintain the representativeness of the sample. Luckily, as part of the usual ASER process, phone numbers are collected from each surveyed household. In a normal year, this information is used for monitoring and cross-checking.  For ASER 2020, the 2018 sample was used as the frame. To rely on numbers, the sampling process must be scientific and rigorous. Despite the Covid-19 challenges, ASER even in this difficult year remains based on a meticulous sampling process.

Timing-wise, September seemed the right time to do the ASER 2020 survey. Many schools have summer holidays in April-May-June-July. This year, July and August was used by state governments to plan and implement their Covid response. By September, school systems across India had settled into providing whatever support they could to their students.

ASER 2020 Wave 1 was anchored around a set of interconnected questions. These included: what resources did families have, who in the family was able to help children, what inputs and learning opportunities did children receive and what were children able to do with respect to learning. Many of these questions were designed not only to explore how families dealt with the Covid crisis on the education front, but also to provide inputs into thinking about opportunities that could be leveraged beyond the crisis. Close to 120,000 households were sampled. Approximately 58 per cent households were reached, of which 75.8 per cent completed the survey. Thus, the ASER 2020 Wave 1 survey obtained information for about 60,000 children.

Here are some of the highlights. First, the availability of ASER 2018 data allowed comparisons to be made.  For example, the proportion of households who own televisions or motorised vehicles remained similar from 2018 to 2020, but a sharp increase in smartphone ownership is visible across states. Nationally, in 2018, 29.6 per cent families whose children went to government schools owned smartphones. This number rose to 56.4 per cent by 2018. For families who send their children to private schools, the figure in 2018 was 49.9 per cent, which increased to 74.2 per cent in 2020. A significant rise in access to smartphones in rural families is a striking feature of the last two years.

In the reference week before the survey in September, about a third of all children reported receiving learning materials and activities from their school. 67 per cent families whose children go to government schools and 87 per cent of those whose children go to private schools reported receiving materials via WhatsApp. Interestingly, 31.8 per cent of government school children’s families also added that materials came via visits (either to the school by parents or by teachers to the child’s home).

Interestingly, 80 per cent of all children in the sample had textbooks of their current grade. This number was slightly higher for government school children. State governments across India made extensive efforts to deliver textbooks to children, and this statistic is testament to these endeavours. Asked about where children were learning at home during the reference week, 70 per cent families said their children did some learning activities in that week. While a majority of these activities were with traditional materials like textbooks and worksheets, fewer children (usually below 20 per cent) accessed learning programmes on television, radio or online.

Five major takeaways from this year’s ASER exercise: First, the situation is likely to remain fluid for some months. With the clear inequities in our society, it is essential to track who is getting what opportunities and to assess what kind of learning loss is experienced.  Second, ASER 2020 gives clear evidence of parental engagement and willingness to support children’s learning. This family support must be leveraged by the school system in a systematic way. Third, traditional teaching-learning methods should be combined effectively with newer ways of reaching/learning. Fourth, in-depth assessments of “what works and how” is needed to improve digital content and delivery for the future. Just because families have devices and connectivity doesn’t automatically mean learning is happening effectively. Finally, the digital divide is layered on to existing divisions in our society. Mechanisms to reach and teach children who are on the dark side of the divide must be worked out so their educational disadvantage can be ameliorated over time.

ASER 2020 completed the first wave in September. It’s likely that a follow-up wave may be planned later in the current school year to track how children’s learning journeys are progressing.