Azadi march sways towards populism of a religious kind

The maulana has remained concerned about the establishment’s engagement with the clergy without taking him on board. 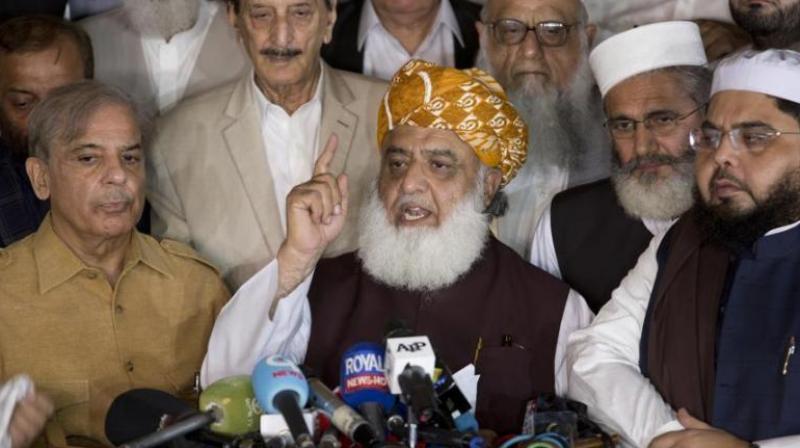 Maulana Fazlur Rehman has packed up his dharna in Islamabad and marched on to yet another ambitious protest phase, i.e. the so-called “Plan B”. Not many are optimistic about the plan, which entails blocking some major highways of the country. However, the maulana has somewhat succeeded in conscripting himself as a relevant actor in the existing political milieu, besides mobilising the young cadre of his support base.

The problem with the religious support base is that it can be mobilised only through using religious sloganeering and blending it with existing political contexts. At the onset, the core demands of the Azadi march were linked to the resignation of Prime Minister Imran Khan and the holding of new elections. But gradually, the maulana and other leaders of the JUI-F started to mix up things with religious issues. The mainstream media and political analysts somehow ignored the religious rhetoric used by the speakers at the Azadi march. But one of the key factors that held the participants together was the way they were provided with a religious orientation to understand the contemporary political scenario.

The maulana’s religious rhetoric remained focused on two narratives: first, that the government has come under the influence of an “Ahmadi lobby”; and second, that this lobby is part of a Jewish-led international conspiracy against Pakistan. A religion-based oratory in such gatherings is understandable; however, knowing their targeted audiences, the maulana and his deputies did it on purpose.

In his early speeches, the Maulana also mentioned the establishment’s intervention in Pakistan’s politics, but gradually softened his stance on the subject. He has been employing and exploiting anti-establishment sentiments since long, mainly due to a growing resentment amongst religious circles about the establishment. But at the same time, as it appears, he also wants a renewed relationship with the establishment. And that, too, has a background.

The maulana has remained concerned about the establishment’s engagement with the clergy without taking him on board. He may have conceived it as a deliberate move by the establishment to create a rift within the religious leaders of the country. The establishment’s short-lived romance with the Tehreek-e-Labbaik Pakistan (TLP) — a Barelvi religio-political party that secured around two million votes in the last election — added to the maulana’s grievances. However, his electoral defeat proved to be the last nail in the coffin. The major religio-political parties, that were united under the banner of the Muttahida Majlis-i-Amal, secured reasonable representation in Parliament in 2002 and formed the government in two provinces, are in search of the same glory. By the time of the 2008 elections, the MMA had disintegrated and religious parties had lost their attraction.

Whether or not the maulana has been successful in conveying the message, his political agitation was certainly meant to regain the glory of 2002, which he believes is not possible without a good working relationship with the power centres. He also realises that the religious parties’ slogans have lost their attraction, and groups like the TLP are gaining more support.

While the establishment feels comfortable dealing with religious actors, the maulana also knows the tricks of manoeuvring. The religious parties have comparatively better organisational structures and institutions, which help them mobilise their support bases at any time. They have street power and a religious cause as well, but what the maulana has learned from Prime Minister Imran Khan’s strategy is that political activism cannot necessarily be based on legitimate grounds. This strategy had paid off for the PTI from the time of the 2014 dharna to the 2018 elections, resulting in electoral success. The maulana might be thinking along similar lines. He has already threatened that he will launch “Plan C” if his demands are not accepted.

The maulana has full potential to become a populist leader, but like Prime Minister Khan, there are constraints on him becoming a Pakistani Viktor Orban or hyper-nationalist Narendra Modi. Class-based distinctions have emerged strongly in Pakistan in recent years, and each class wants a populist leader of its own sort. Imran Khan capitalised on the salaried and services-based classes, and the maulana can emerge as a populist leader of low-income groups, which are a tribal, rural and urban transaction. The maulana has narratives to offer and exploit the religious cadres’ grievances and identity crisis.