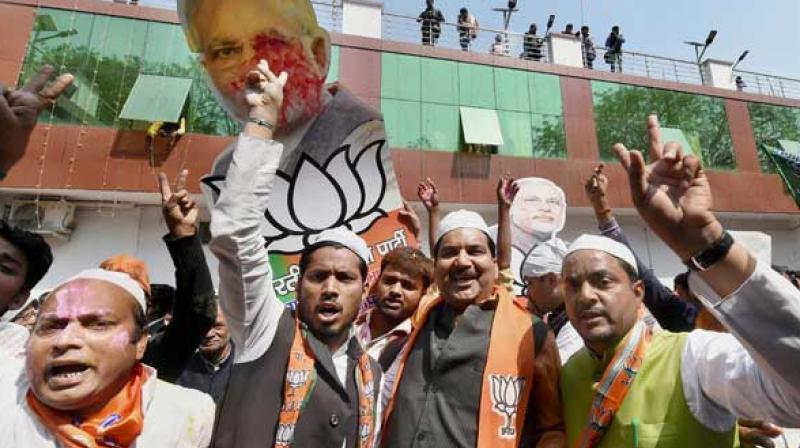 BJP supporters celebrate as early trends show the party's win in the last Uttar Pradesh and Uttarakhand assembly polls, at the party office in Lucknow. (PTI)

The thought came to me that although limited in numbers, the BJP does have some prominent Muslim faces. There is Mukhtar Abbas Naqvi, a minister in the central government. Shahnawaz Hussain, who has had a long stint with the party, was formerly a Cabinet minister. Among other faces, there is Shazia Ilmi, and Zafarul Islam, recently sent to the Rajya Sabha. The party actually has a minority morcha, with Abdul Ansari as its president. The learned and erudite Arif Mohammad Khan, now governor of Kerala, has also leaned in support of the saffron party ever since he left the Congress in the 1980s over Rajiv Gandhi overruling the Supreme Court judgment through an ordinance in the Shah Bano case.

I wonder how these Muslim supporters have reacted to the open vilification of their community by the hardline supporters of their own party. At the beginning of the Covid crisis, there was a massive campaign against members of the Tablighi Jamaat, who had congregated in Delhi for an international conference. It was made out that they were part of an international conspiracy to spread Covid in India; many of their members were arrested; and many more were ostracised even though they were Covid negative. Some supporters of the BJP actually made a public appeal for people not to buy vegetables or other necessities from Muslims. Presumably, according to their thinking, all Muslims were working for an anti-national agenda as part of a coordinated plan to spread the virus. Finally, the Mumbai high court had to warn the government against making Tablighi members scapegoats. There was also a diplomatic fallout, as dozens of governments abroad expressed concern at the continued arrest of their citizens who had come to attend the conference.

Recently, a despicable hate campaign was carried out on social media by Hindu right wing bigots against the Tanishq advertisement. The advertisement showed a remarkably endearing clip of a Hindu woman being given love and respect by her Muslim husband’s family. However, an entire troll army wanted the ad to be withdrawn. For them it was an example of ‘love jihad’. The campaign was so vicious that the Tata group, that owns Tanishq, withdrew the ad. It was an act of pathetic capitulation in the face of the irrationality of illiterate hatred.

Did the luminaries in the BJP from the Muslim community speak out against this malicious denigration of their faith, and the express values enshrined in our Constitution? If they did, I did not hear it. Should their silence then be construed as support for this unspeakable defamation? Are all cases where a Hindu woman willingly and happily marries a Muslim man a case of ‘love jihad’? Were Muslim BJP spokespersons and leaders afraid that if they break their silence they would be going against the hardline viewpoint of their own party supporters? And, if this indeed is the case, how can they in good faith continue to remain mum? The abolition of triple talaq was a good thing, but can a party that claims to have the welfare of the Muslims in mind simultaneously countenance so much hatred against them?

Or, is it that intra-party dissent is no longer welcome in the BJP? Perhaps, the perception is that those who opposed the Tanishq ad have powerful backers within the leadership of the BJP. Shivam Vij, a commentator and columnist, revealed in a tweet that the person who ‘exposed’ the brand manager of Tanishq jewellery to massive trolling, hatred and threats, is followed by our Prime Minister. Did the Muslim leaders in the BJP then opt for political expediency over principle? This does not speak very well about inner-party democracy within the ruling party. Madan Mohan Malviya, who served four times as the president of the Indian National Congress, and on whom a BJP government conferred the Bharat Ratna posthumously, publicly opposed the politics of appeasement and the participation of the Congress in the Khilafat movement. He resigned from the party in protest against the Communal Award made by British PM Ramsay Macdonald in 1932. Those were the days when leaders acted on principle. Those were also the days when the Congress Party respected dissent, and did not attack those who only recently sought legitimate reform within the party.

The basic truth is that hatred, bigotry and violence or threat to violence of all hues is a dangerous canker eating away at the vitals of our Republic. Cherished values enshrined in our civilisational legacy and our Constitution are being swept away by an avalanche of bigotry that must be opposed by the vast masses of citizens, for it is truly anti-national. Perennial social instability and insecurity weakens governance, privileges false priorities, and tarnishes the image of our nation in the international community. Lord Ram, in the Ramayana says: Janani Janmabhoomischa Swargadapi Gariyasi (Mother and Motherland are superior to Heaven). The well-being of the motherland, where people of all faiths enjoy equal rights, matters far more than the abhorrent hatred that some people are using to divide us. Has the time come for some Madan Mohan Malviyas to rise within the BJP? And, for the handful of Muslims in the party to truthfully and publicly oppose what is wrong?