We're beginning to see the shape of the post-COVID UK: Freeports all around but a wall in the channel 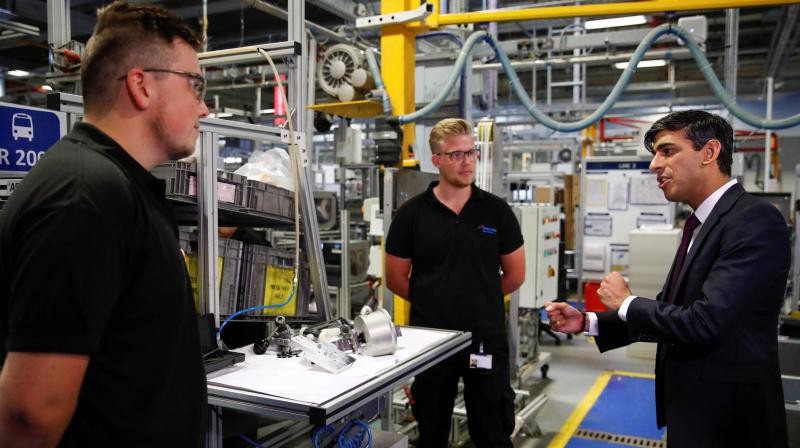 File photo of UK chancellor of the exchequer Rishi Sunak (right) speaking to employees during a visit to a factory in Worcester, central England earlier this month. (AFP)

The left hand said to the right
What’s given you the privilege
To shake hands and to write?
Why has nature given you the edge
And all the noble tasks?
Why do I have to wash Indian bums
The left-behind hand asks!

The plague is upon us and it has disrupted individual lives and global economies. Humans are resilient, capitalism is less so. For instance, scribbling and cooking and not meeting people hasn’t depressed me, though I do miss contact with loved ones and going to pubs, shops and dirty dens. I pass the time (my God, this is becoming Twitter or Facebook with boring self-preoccupied garbage --fd. When were your columns not? --Ed).

The capitalist economies -- and there are very few others in our sad world -- are … well… the word which begins with an 'f'.

Countries have to deal with the fact that the plague has shut down production and the service sector. Billions are out of work and very many are struggling to survive. Yes, Europe and the West are privileged beyond comparison with other parts of the world, but still have to encounter the damage and attempt recovery.

I am best placed, gentle reader, by being stuck in London to inform you about the UK. This government has a chancellor (finance minister) called Rishi Sunak. He is an ex-banker of the American/international firm of Goldman Sachs. He was also an offshore hedge fund manager. This, I am told by people wiser than myself, is a profession that “earns” money by gambling vast sums on the ups and downs of shares within the international capital markets. It’s not an enterprise that makes anything or does any good to anyone except to the gamblers who make zillions. The “offshore” element is that people who profit by this enterprise are tax dodgers.

As the chancellor of the exchequer in this plague year, poor Rishi has been faced with one of the deepest financial crises that Britain has suffered for a century. He got the job when Sajid Javid, another Tory climbing the greasy political pole, resigned as chancellor and left the Cabinet because Boris Johnson’s weirdo adviser, Dominic Cummings, instructed him to dismiss the civil servants and advisers who work for his finance ministry and amalgamate with Prime Minister Boris Johnson’s civil servants and advisers. Sajid, famously a Pakistani immigrant bus-driver’s son, resisted and finally, or almost instantly, resigned. He didn’t want to be Cummings’ ventriloquist-dummy.

It was then announced that Rishi would get the job. Sajid wished him good luck. It is as yet unclear whether Dominic has Rishi on strings or whether dishy Rishi, with the broad inane grin, has branched out on brave economic courses on his own.

Politicians who owe their power to a democratic electorate have to make gestures to keep the hoi polloi “sweet”. The COVID-19 plague has thrown millions of people out of their jobs. As a consequence, Rishi has announced a £9.4 billion job retention package. He will pay employers £1,000 for every worker they continue to employ. This sounds good until one realises that the average monthly wage of UK workers is £1,940. In other words, the employer will have to fork out half that wage for the “average” worker and more or less for those above and below which make up the “average”. This will work for the first month, but then what? The chief ec=xecutive of Her Majesty’s Revenue and Customs, who will dispense the cash, went on record saying this handout was a gimmick and would not “deliver value for money”.

Regardless of how Germany, the richest country of the European Union, rebuilds its economy and pays its debts after the Covid period, Rishi has already announced his plans for what he says will trigger the recovery. You can take the capitalist out of tax-dodging, but you can’t take the idea of tax-dodging out of the capitalist. Rishi now proposes to turn several of Britain’s coastal cities into “freeports”. This idea has been mooted for decades and it’s tantamount to turning Britain into Bringapore. It’s tax-dodgers of the world unite and buy up land in Grimsby and nine other havens where you can register and bring your capital. The plan (dreamt up by Dominic, or by Rishi?) is supposed to attract money and turn these freeports into industrial hubs to spread prosperity.

With Britain’s workers being paid five times the wages of workers in, say, Vietnam, will capital really build manufacturing in these havens? Or will they deteriorate, as has been the experience in most freeports, into illegal money-laundering, legal tax-dodging, crime and capitalistic fiddles of all sorts? Apart from the projected prosperity for these ports, will they benefit the rest of the country? Has San Marino’s trade in illegal international arms deals, etc, sorted out Italy’s economy? Rishi wants to pave the way for his usurer mates to re-enter the temple.

This week the government announced that they will expel Huawei from Britain’s 5G project. This was done after pressure from the American government which, after Brexit, seems to have Britain’s government by what the British call “the short and curlies”. This government is in danger of becoming Donald Trump’s lapdog. Which brings one to another speculation. This week home secretary Priti “Clueless” Patel said that too many illegal immigrants were entering Britain via small boats coming across the English Channel, and she was determined to stop them. It remains to be seen if she flies to Washington to get some ideas and starts on her return to construct a wall in the English Channel to keep the boats out.