Ujjwal K Chowdhury
The author is a noted media academic and columnist, and former Dean of Symbiosis and Amity Universities.

Paradoxically, despite leaning towards a broad united front against BJP, the Congress continues to treat AAP as a political untouchable. 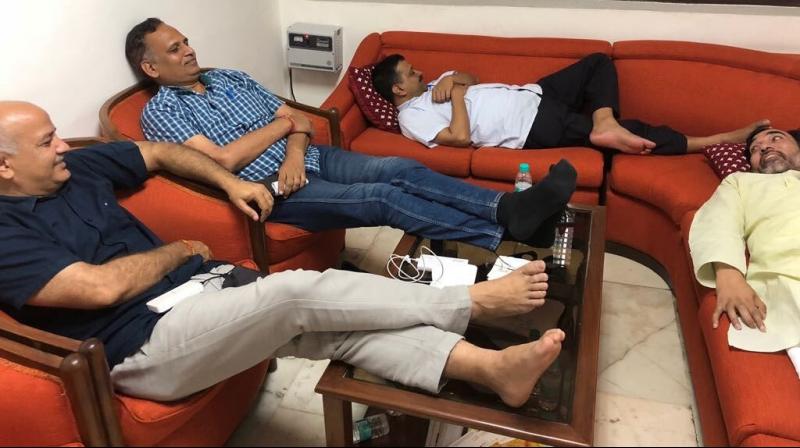 The agitation in Delhi is less for the immediate reasons and more for Delhi statehood. (Photo: Twitter)

The agitation in Delhi is less for the immediate reasons and more for Delhi statehood and for a non-Congress non-BJP federal front.

The sit-in dharna of Delhi Chief Minister Arvind Kejriwal and his three colleagues in Raj Niwas, demanding Lt Governor's intervention to end the undeclared non-cooperation of IAS officers serving in Delhi government with the ministers and to kick-start the door-step delivery of ration and other government services, is not just for optics and immediate losses and gains.

The CM and the AAP machinery have gone into full-scale campaign in social media, on these issues, which has now spilled into the streets with more than 25 thousand people marching to the PM house on Sunday last, and four chief ministers, those of Kerala, West Bengal, Andhra and Karnataka, coming on the streets and addressing press conference in Delhi denouncing the apathy of the LG and the "mistreatment of a historically elected Delhi government" by the Centre.

From the source of the impasse to the turn of the events, the twin goals of pushing statehood for Delhi and Federal Front for India are writ large on it.

The complexity of Delhi statehood:

This maze of multiple agencies, with overlapping authorities as well, is a natural breeding ground for mis-governance, miscommunication, and non-cooperation stalling work. The petition of the AAP government pending before the Supreme Court with regards to demarcation of rights, responsibilities and authorities of the elected state government and the nominated LG may hopefully see some action now.

The issue needs to be settled once and for all to enforce rule of law and avoid chaos. There cannot be a democracy where an elected government has no right to governance in accordance with its promised measures and policies.

It must also be noted here that the approach of the AAP government from the beginning has been one of confrontation and not find a middle-path solution.

Delhi has always been looked upon by AAP as a spring-board for a national political role. Failing to come to power in Punjab and to win even one seat in Goa Assembly had chastened and restricted the party over the last one year. Till this agitation again.

Delhi Statehood, once a manifesto item of BJP and Congress and now vociferously demanded by AAP, has a logic in the light of the governance complexity here. But the prevalence of central government and foreign embassies etc in New Delhi and its dependence on peripheral Delhi makes the issue more complicated than it is made out to be. There needs to be an depth study of Washington, Brasilia and Rome models to create the strategy for Delhi Statehood.

Boost to the Federal Front:

This may well turn out to be a significant moment for the AAP to ramp up the Centre-state battle, transforming it into a full-fledged political and constitutional confrontation under the banner of a Mahagatbandhan of sorts of non-BJP non-Congress parties.

Interestingly, unlike the last time around when AAP CM had gone for a dharna in 2014, this time, a plethora of regional parties, significantly SP, BSP, RJD, JDU, JDS, RLD, NCP, TMC, TDP, TRS, DMK, CPI and CPM have expressed complete support to the agitation of AAP, and the Congress is interestingly seen on the same side of BJP.

Former BJP Finance Minister Yashwant Sinha has actually joined the protest of AAP and expressed full solidarity, apart from a few disgruntled BJP leaders like Shatrughan Sinha, and also cadre of the left parties in Delhi, along with four Chief Ministers.

Once upon a time, in a cold January night of 2014, the maverick Delhi Chief Minister Arvind Kejriwal sat on dharna outside the Rail Bhawan protesting against Police non-cooperation & erstwhile UPA government's recalcitrance in punishing policemen who refused to act on issues of a minor rape, and suspected drug peddling and prostitution in two different cases of that time.

Detractors, including many regional parties, termed it 'anarchy'. The AAP government later resigned on the ground of Janlokpal Bill not being allowed by the Centre, and returned to power with a thumping 67-03 majority.

Today, in the summer of 2018, Kejriwal and colleagues are back to square one, resorting to a dharna at the house of the Lieutenant Governor. And fight against LG is virtually a fight against the NDA, as the appointed LG is the agent of the Centre in case of the peculiar legal status of Delhi ruled by multiplicity of agencies. And this time around, the entire Opposition sans Congress is with Kejriwal.

Federal Front mooted by Mamata Banerjee of TMC, supported by Kejriwal in the past, has just got another boost. However, a motley group of regional parties, with even conflicting ideologies, and no accepted national leader and neither a Common Minimum Program, may find it near impossible feat to challenge the Narendra Modi government in Lok Sabha polls.

Paradoxically, despite leaning towards a broad united front against the BJP, the Congress continues to treat the AAP as a political untouchable. This stems from the fact that AAP has decimated Congress to come to power, is the major challenger of Congress in Punjab, and is focussing on building its organization bottoms-up in states which are bipolar between Congress and BJP and is hence a short-term adversary for Congress first there.

But, the current stoicism of Congress would rather make it suspect in the eyes of various regional parties and is not in the interests of its 2019 plans.

Congress is the biggest loser in the ongoing drama. Neither the people of Delhi has a reason to look at it, and its stakes with regional forces also going down.

Congress has also failed to stand for complete statehood of Delhi, which Sheila Dixit so vociferously demanded, and BJP also promised earlier in its manifesto.