Opinion   Columnists  18 May 2021  Aakar Patel | Govt needed to have ‘grip’ over Covid: That is what PM lacks
Opinion, Columnists 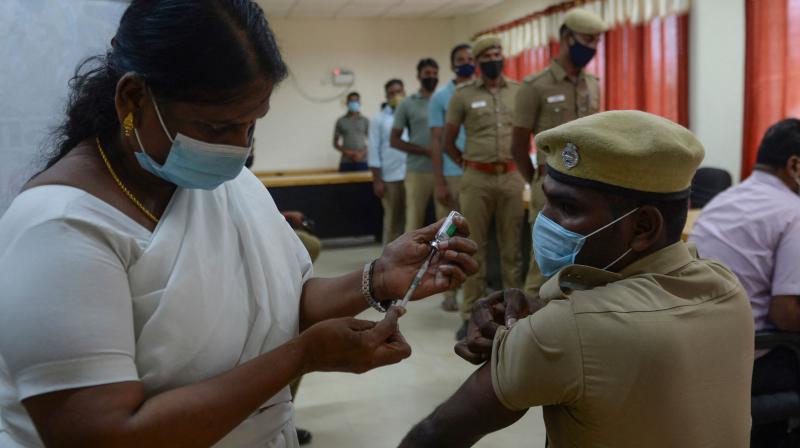 The official position of our government in response to a shortage of vaccines and a shortage of oxygen and of ventilators is that nobody could have anticipated this. (AFP)

He is a famous name in the history of warfare, but Field Marshal Bernard Law Montgomery does not have many battlefield victories to his name. In fact, his most famous engagement, called Operation Market Garden (after which the Hollywood movie A Bridge Too Far was made), was a disaster. But historians agree that Montgomery had something that all generals should have, and this is “grip”. This is the faculty of being aware of the situation, being knowledgeable about what resources are at hand and what may be required in the future and being conscious of what events to anticipate.

These are not qualities which we associate with our Prime Minister. His interest is not in the details but in the broad scheme. In a famous interview just before the 2014 general election he said to the journalist Madhu Kishwar: “Even today if my officers show me some paper, I say: ‘Tell me what’s in it in two minutes. For me, two minutes is sufficient for a 10-page document. This skill is something I have developed.’”

But while he has no interest in the details, his preference is not to stand aloof from on-ground operations but to insert himself through the bold and imaginative stroke. For instance, the BBC reported at the end of March this year that before the lockdown last year not a single ministry was consulted about what the consequences would be.

The BBC filed 240 right to information applications with various Indian government departments -- health, finance, disaster management -- to find out if and how much they were consulted ahead of the lockdown.

The responses revealed that no experts or government departments were consulted. The government refused to give the BBC a statement explaining why the concerned departments were not consulted ahead of time. A second example of the Prime Minister’s style of functioning is the famous demonetisation exercise of November 2016. Here also only a handful people knew that this was about to happen. As a parliamentary democracy, India follows the principle of collective responsibility. But even the Union Cabinet was not told till the day of the demonetisation –Tuesday, November 8, that India’s Rs 1,000 and Rs 500 notes – 86 per cent of all currency by value -- would be wiped out that evening. The government was not only unprepared for Prime Minister Modi’s move; it was deliberately kept hidden from the government.

My point is not to say that this style is good or bad or whether it has advantages or disadvantages. The evidence is clear, and there is no point in discussing that here. The point is to examine whether it works in situations such as the one we find ourselves in. The problem of the Covid-19 pandemic cannot be approached through the single brilliant stroke. It needs the State to be aware of the situation, be knowledgeable about what resources are at hand and what may be required in future and being conscious of what events to anticipate. In a centralised system, where decision making is often the purview of a few people and sometimes that only of one man, this may be harder to do as we are now discovering.

The official position of our government in response to a shortage of vaccines and a shortage of oxygen and of ventilators is that nobody could have anticipated this. But the fact is that the rest of the world anticipated it. What we are receiving today as aid is not new material manufactured yesterday around the world. It is the surplus that was produced by many nations which had anticipated the crisis we are going through today. They dealt with it because of their preparedness and that is the reason this material became surplus. No nation keeps useless stocks of expensive things lying around in case India will urgently need them. The reason we don’t have enough vaccines is that we did not order them at the right time because we didn’t think we needed them. As the Prime Minister said to the World Economic Forum in late January:“India is among those countries which have succeeded in saving the lives of the maximum number of its citizens and the number of people infected with corona is rapidly decreasing.” He added that “it would not be advisable to judge India’s success with that of another country. In a country which is home to 18 percent of the world population, that country has saved humanity from a big disaster by containing corona effectively”.

We had decided based on the evidence we saw that India was unique and had overcome Covid-19. Other nations thought of the issue as a longer problem, and not limited to the first wave. They ordered the vaccines on time and received them. They let their scientists determine whether the battle against the pandemic was won instead of a divinely inspired leadership. Once the science revealed that only precaution, healthcare preparations and vaccination could stop the pandemic, that is where their execution capacities were deployed.

The question is why we did not anticipate a second wave or a wave of such destructive power. The answer is that if the leadership must take full control over situations, then it must have grip rather than genius strokes. There may theoretically be times when the latter style is advantageous, but this era is not among them.