In Karnataka, see the birth of a shamocracy

The BJP and its ideological parent, the Rashtriya Swayamsevak Sangh, is little but a breeding ground of autocrats masquerading as democrats. 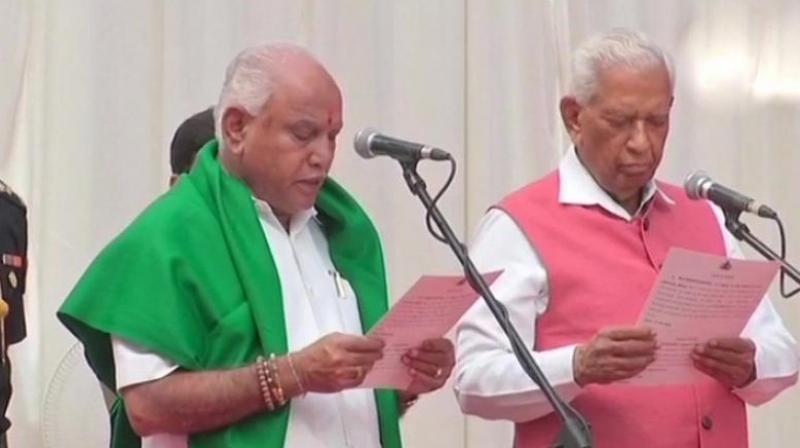 Irrespective of the turn of events in Karnataka’s politics and legislature and whether the Supreme Court post-facto gives a nod to the swearing-in of B.S. Yeddyurappa as chief minister or nullifies it, there is no longer an iota of doubt that the BJP has any qualms in quashing constitutional propriety, setting precedents aside and trampling on political morality at the altar of its political ambitions. For the BJP, specially for Prime Minister Narendra Modi and party president Amit Shah, nothing is of greater value than achieving the long-term political objective of converting a secular and democratic India into a Hindu State. The way the BJP government’s installation in Karnataka has been scripted must be seen alongside occurrences of the blatant flouting of laws and principled politics being thrown to the winds since May 2014.

The BJP and its ideological parent, the Rashtriya Swayamsevak Sangh, is little but a breeding ground of autocrats masquerading as democrats. The BJP may yet not be able to prove its majority and be forced to make way for H.D. Kumaraswamy to become chief minister. However, the naked use of the state machinery and the subversion of various arms of the State intensifies worries that have been voiced since late 2014 after the rampant targeting of minorities and critics of the BJP became the recurrent theme. The fear of these happenings, if unchecked, eventually developing into something close to fascism will ring more blaringly with Mr Yeddyurappa assuming office. Henceforth, it cannot be presumed that the BJP would respect or honour every electoral verdict.

The juxtaposition of Karnataka governor Vajubhai Vala’s decision with last year’s directives of the governors of Goa and Manipur when inviting the BJP to form governments in those states exposes the BJP’s intention of being in saddle despite the outcome of tight elections. Only decisive mandates will henceforth prevent the BJP from grabbing power. The governors in Goa and Manipur justified their decisions stating that the largest post-poll alliance was invited. But now, this privilege has been denied to the JD(S) and Congress and Mr Vala went with the principle of the single largest party. However, the “rider” in the Sarkaria Commission report, that the single largest party can be invited only if it is supported by the required number of independents, was not factored in before he took his call. Indisputably, this is a regime which bends the same rule differently and cites precedents from different perspectives whenever this suits its immediate objective.

This goal became clear towards the end of the counting day when Mr Modi walked into the BJP headquarters and declared he would not allow the state’s development journey to be trampled upon or that the BJP would not lag in efforts to create a “brighter future” for Karnataka. From that moment it was evident that come what may be, the BJP would use every tool available — legal or illegal, ethical or unethical, moral or immoral — to form a government in the state. The tearing hurry and preconceived plan of forming a government regardless of the outcome became evident when Mr Yeddyurappa declared on polling day that he would take the oath on May 17, and this is what has happened. It would be tempting to dismiss the claims of Mr Yeddyurappa as either the rant of an overambitious politician intent on boosting the morale of his party cadre or a feverish rush of a superstitious leader. But his confidence has to be contextualised within Siddaramaiah’s “open to dalit as CM” statement before the counting. Evidently, the leaders had sensed what the media had failed to do — that voters were not re-electing the Congress.

The BJP argued that the mandate was a rejection of the Congress and this prompted the governor to follow the convention of inviting the single largest party to form the government. But so was the mandate in Goa last year a verdict against the incumbent BJP. Legal luminaries close to the BJP have been putting forth the viewpoint that Goa’s case cannot be equated with Karnataka because one is a small state, while the other is one of the larger states in the country. Such logic is anti-democratic and endorses the principle of strongmanship — that the set of rules for smaller states will be different from those for biggest states. This is a pointer to the political credo of the present regime and its belief in majoritarian principles, the bigger you are, the greater shall be your powers. From a nation that took pride in making the minorities, not just religious communities, comfortable and secure, the BJP feeds on the majority’s perceived hurt and sense of ignominy heaped in the past. Never has the future of democracy appeared as critical as it is now as the checks and balances which Indians prided as existing within the system are now being slowly eroded block by block, institution after institution, making India more of a shamocracy.

The Karnataka government is necessary for the BJP not just for its dominance in the state and because it reopens a shut doorway to southern India. The verdict is more important for the BJP’s core constituency in its principal bastions in the north and west. People who till the other day considered anyone from the south of the Vindhyas as Madrasis suddenly consider Kannadigas as one of them, people who have sacrificed a lot because of the politics of appeasement. The government in Karnataka is important for the BJP because it provides opportunity to harness latent Hindu sentiment. Large sections are willing to support the BJP merely because it espouses Hindu interests and seeks to “cut down” the minorities to their size to end their “pampering” by the “sickular” parties. The BJP may have tried to conceal Hindutva in its campaign but Yogi Adityanath’s deployment established once again that the BJP consistently uses majoritarianism as a foundation in its electoral face-pack. The BJP cannot afford Mr Yeddyurappa to fail in his trial of strength. Every inducement will be offered in the blatant horse-trading that begins now. This will predictably be given a patriotic veneer because India is increasingly coming under the grip of an Indian version of neo-McCarthyism.