Odisha chief minister and Biju Janata Dal president Naveen Patnaik has declared that he will go it alone and not joint any front. 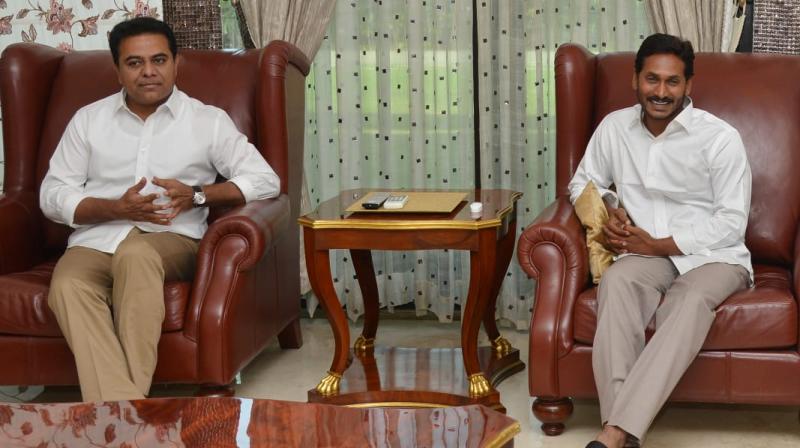 Political observers comparing the probable alliance between the two parties with that of the Congress and the Telugu Desam Party (TDP) is understandable, though it was off the mark. Congress president Rahul Gandhi and TDP president and Andhra Pradesh chief minister N. Chandrababu Naidu had formed an alliance to oppose the BJP-led NDA of Prime Minister Narendra Modi, but the anti-Modi sentiment was missing in the Rao-Reddy meeting. They have indicated that their combined strength of 42 Lok Sabha members — Andhra Pradesh’s 25 and Telangana’s 17 — will be used to protect and promote the interests of the two Telugu states. This presupposes that the YSRCP and the TRS hope to win the maximum number of seats in the April-May Lok Sabha polls. It also leaves the door open for the two regional parties to deal with whichever coalition emerges as the victor at the Centre. The other difference between the Congress-TDP alliance and the bid of the TRS and YSRCP to form a partnership is that the Congress is a national party while the TDP is a regional party, while in the case of the TRS and YSRCP, both are regional parties. Second, the YSRCP does not have a presence in Telangana and the TRS is perforce absent in Andhra Pradesh, while the TDP is present in Telangana and the Congress in Telangana, Andhra Pradesh and in the rest of the country. Their exclusive spheres of influence and dominance makes it easier for the TRS and the YSRCP to deal with each other.

The hypothetical “federal front” mooted by Telangana chief minister K. Chandrasekhar Rao remains nebulous as yet. Odisha chief minister and Biju Janata Dal president Naveen Patnaik has declared that he will go it alone and not joint any front. Earlier this month, Mr Chandrasekhar Rao met West Bengal chief minister Mamata Banerjee in Kolkata and he was reaching out to the BSP’s Mayawati and Samajwadi Party’s Akhilesh Yadav as well, and Ms Mayawati and Akhilesh Yadav on their part were keen to meet Mr Chandrasekhar Rao as well. With the BSP and SP keeping the Congress out from their alliance in Uttar Pradesh, the two UP leaders should have no problem in joining the TRS and YSRCP to form a common front. That would leave the Congress and the TDP isolated. It is to be noted that the TDP has not joined the UPA.

This splintered Opposition is good news for the BJP and Mr Modi. The BJP will also try to woo the TRS and YSRCP with promises of economic packages for both Andhra Pradesh and Telangana. If the Indian political scene could be inferred from coalition arithmetic alone, then it is easy to predict the outcome of the parliamentary election. But coalitions do not determine voters’ choice. All that the TRS and YSRCP can hope for at this stage is to win the largest number of the 42 Lok Sabha seats from the two states, and then use the combined strength to bargain with those trying to form a government at the Centre. The fact that Jagan Mohan Reddy and K. Chandrasekhar Rao are not hostile to Mr Modi as such makes them potential allies of the BJP.

That brings us to the question about the ideology of the regional parties. What then is the ideology of the TRS and the YSRCP? It seems that these two parties do not entertain any ambitions at the national level, though there is speculation about K. Chandrasekhar Rao leaving Telangana to his son, K.T. Rama Rao, and looking for greener pastures at the national level. But there is no indication of that yet. Even Mr Chandrababu Nadu restricts himself to the role of the kingmaker, and shows no signs of wanting to be a Prime Minister. So, there are three aspiring kingmakers from the two Telugu states — Mr Naidu, Mr Rao and Mr Reddy. And we are tempted to ask — is southern ambition then limited to playing the role of kingmakers and not reaching out to the crown itself the way Mr Modi reached out for it from 2013 onwards? Of course, Mr Modi belonged to a national party, which was an advantage.

At ground zero, Mr Naidu, Mr Rao and Mr Reddy are fighting to control their own territory. Mr Rao has managed to emerge with an undisputed victory in the Telangana Assembly polls last month. Mr Naidu and Mr Reddy will fight it out in the Assembly elections this summer. For them, the Lok Sabha election is not a matter of do-or-die as the Assembly election is. Because of their local commitments and distractions, the TDP, YSRCP and TRS have reduced themselves to playing the role of marginal players. The time when the marginal players with smaller numbers become important is when the two big parties, the BJP and the Congress, fail to score reasonably well enough.

The coalition calculations then are up in the air. It is not the cunning of the political leaders that counts, it is the preference of the people as expressed in an election that will determine who will govern the country at the Centre. But political leaders have to do their bit in the drama and make moves and counter-moves as if that is all that matters. At the end of the day, the best laid plans of politicians come to nothing. But their actions matter most before the finale. Some of the observers are likely to argue that it is the positioning of the parties that will determine the final shape of things. It is a plausible argument. But right now what matters is the fight between Mr Naidu and Mr Reddy in the Andhra Pradesh Assembly elections.