How to lead UN

Secretary-Generals often fail to deliver because the method of their selection itself is flawed and non-transparent. 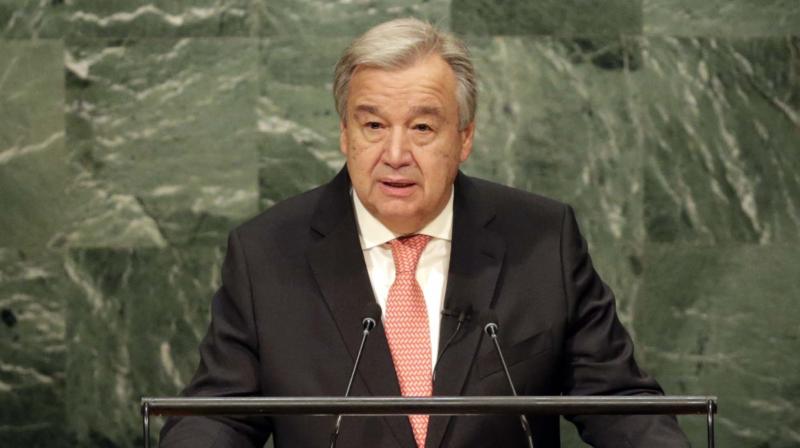 The swearing-in of Portugal’s Antonio Guterres as the ninth Secretary-General of the United Nations on December 12 is an occasion to reflect on the leadership required in the world body in the face of mounting challenges.

A welter of global crises awaits the new UN chief, who is assuming office when wars, forced displacement, climate change, human rights abuses and terrorism are touching record highs since the end of the Cold War in 1991. The very foundational ethos of the UN — international cooperation to jointly tackle shared problems — is in short supply. If ever there was a case for heroic leadership that can make a decisive intervention to save the planet, Mr Guterres could not have asked for a more critical juncture to take over the reins.

The oft-cited question: “Is the UN fit for purpose?” has an important subset that rarely gets asked, “Is the UN’s new boss fit to turn the tide?” Neglect of the issue of the suitability and performance of the Secretary-General owes to an unfortunate interpretation of this position as a bureaucratic rather than a political one.

As the head of a gigantic organisation of over 44,000 employees, the Secretary-General does have to tend to innumerable administrative chores and calls. He has to indeed win and maintain the loyalty and trust of the UN “system” and its plethora of specialised agencies, councils and committees.

But there are more vital qualities demanded from a Secretary-General — charismatic personality, visionary role, risk-taking, path-breaking initiatives and solution-paving diplomacy. When the world is falling apart, we need bold statesmanship from the 38th floor of the UN headquarters in New York.

Over the decades, the UN has been led mostly by glorified file-pushers and career-minded bureaucrats who did not think out-of-the-ordinary and lacked the courage or conviction to achieve extraordinary outcomes. Humouring the most powerful member states and staying on the right side of financial donors, while protecting UN employees and their privileges, have sadly marked the tenures of predecessors of Mr Guterres.

These Secretary-Generals were content to keep the “system” happy rather than to meet the expectations of “we the peoples”, in whose name the UN was founded in 1945. Their approach was conservative, afraid of ruffling feathers, and plotting to ensure they get re-elected for a second five-year term after the first expired.

Secretary-Generals often fail to deliver because the method of their selection itself is flawed and non-transparent. There is no dearth of worthy international personalities who can be radical at the helm of the UN, provided they are given a chance. But what has happened since inception is that the permanent members of the UN Security Council winnowed the field of prospective candidates to a narrow group of “non-threatening” types who will be docile and not trample upon any of their core interests.

Instead of an open election where the entire UN General Assembly could vote or the citizens of all UN member states could have a say, the Secretary-General has been picked from an elite cohort known for its “insider” credentials and non-assertive nature.

What can one get from such a cautiously filtered process if not a harmless bureaucrat who talks up morals and values but cannot remake international affairs? The classic example of this “system”-serving Secretary-General is the outgoing Ban Ki-moon of South Korea. A dull, uninspiring and diminutive figure who lasted two terms without venturing any out-of-the-box measures to stem the worsening tide of violent conflicts, economic despair and environmental destruction, Mr Ban was a phlegmatic “invisible man” who lacked the resolve to reform the UN as an institution or to manoeuvre in severe international crises to achieve fair settlements.

When the world was in flames, all he did was issue statements, convene meetings and occasionally reprimand member states that were flouting international law behind closed doors. The shameful manner in which he refused for years to acknowledge obvious UN culpability for its Nepalese peacekeepers spreading cholera in Haiti, and his look of utter helplessness as carnage spread in Syria, are two examples of how there was absolutely no political strategy in his 10-year-long reign. His legacy will be to join the long list of forgettable Secretary-Generals who cumulatively contributed to the sinking credibility of the UN as a paralysed and dysfunctional entity which is not accountable to ordinary people.

Will Mr Guterres be any different? The manner in which was chosen for the post was only marginally better than that of his forebears. Despite a worldwide campaign to break the glass ceiling and elect a woman as Secretary-General, the powers-that-be in the Security Council converged around yet another man. Candidates were a little more exposed this time around, issuing campaign manifestos and engaging in televised American-style debate. But the ones who competed were there due to a prior screening from above rather than due to a push from below.

Mr Guterres, a former socialist Prime Minister of his country who has governed the UN refugee agency, does realise that he has to “reconstruct relations between people and leaders” in an age where public faith in the liberal éstablishment and global institutions has collapsed. He has also vowed a new and vigorous surge in “diplomacy for peace” which was missing under Mr Ban. But to implement these promises, he will have to fearlessly take on vested governmental and corporate interests that have rendered the UN toothless.

The one and only illustrious Secretary-General who did that was Sweden’s Dag Hammarskjöld (1953-1961). He showed character and creativity at the height of the Cold War by galvanising small member states in the General Assembly to bypass the stalemate in the Security Council, engaging in hyperactive personal diplomacy in war zones, and inventing the idea of peacekeeping missions. He took on both the superpowers and famously remarked: “it is very easy to bow to the wish of a big power” and “another matter to resist it”. Hammarskjöld was assassinated for his proactive role in decolonisation and ending the proxy war in Congo. He paid the supreme price for being a true leader, but he was a giant who fought for dignity.

Irrespective of how undemocratically Mr Guterres was anointed, he must look back at Hammarskjöld and remember that there is room for innovation and transformation of the system if the Secretary-General exercises his leverage with guts and moral clarity. For the sake of the world, Mr Guterres should succeed. May Hammarskjöld’s spirit be with him.