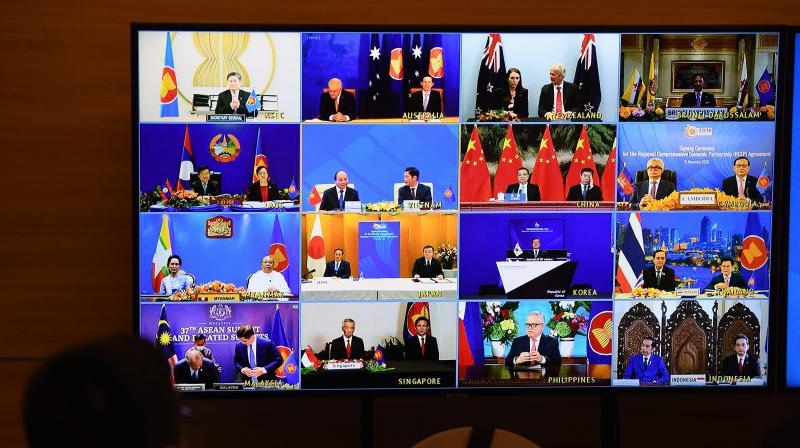 The leaders of the representating nations of RCEP attending the ASEAN summit in Hanoi. (AFP)

While the entire world was focused on the American presidential election, the signing on November 15 of the Regional Comprehensive Economic Partnership (RCEP) has significantly altered the Indo-Pacific strategic environment. With all 10 Asean members joining China and Japan, besides South Korea, Australia and New Zealand, a huge free trade bloc is born. With a combined $26.2 trillion of GDP, one-third of the world’s total, it will facilitate commerce among members by eliminating 90 per cent of tariffs.

Therefore, while US President-elect Joe Biden’s path to office is now clear, despite the Trumpian Twitter tantrums, he faces a more complex scenario in the Indo-Pacific region. There is still some time before the RCEP is fully implemented as a certain number of Asean and non-Asean signatories must ratify it first. But any analysis of the implications of the Biden presidency simply cannot ignore this new development.

Multiple challenges await the next US President, at home and abroad. Overcoming the Covid-19 pandemic, with cases spiking due to the onset of winter and the lax observance of precautions, looms above all else, as indeed do its economic consequences. The American economy has shrunk, compared to a year earlier, by slightly over minus four per cent, as Britain’s figure tops minus 10 per cent and the Eurozone at minus eight per cent. Canada and Japan fall in between those figures and that of the US. The Economist magazine writes that while the pandemic will fade by the end of 2012, the “tech surge will outlive Mr Biden’s presidency”. These deeper changes are pitted against the desire of the liberal faction of the Democrats to favour manufacturing jobs and social goals. The US markets did not drop on the Biden-Harris victory as control of the Senate remains with the Republicans, seen as blocking the Democratic socio-economic agenda. This balance hinges on the fate of two Senate run-off contests in Georgia on January 5. If the Democrats win both, they will seize control of the Senate, the strength of both parties being tied at 50 each, giving the vice-president the casting vote. That could rile the US and even the Indian markets.

As regards the pandemic, Mr Biden’s approach has emerged, despite Mr Trump not cooperating with his transition team. A group of experts has been formed to suggest a plan, including for vaccination of the populace, based on science and medical expertise rather than Trumpian evasion and half-truths. Mr Biden realises control of the pandemic is critical to reviving the economy and jobs. The Democrats want to hit the ground running after Mr Biden’s inauguration on January 20.

As a global power, the US cannot ignore the foreign policy challenges. On China, Mr Trump’s forthright criticism of predatory trade practices, theft of intellectual property and state capitalism led to trade sanctions to coerce Beijing to accept a more transparent rules-based system. The Covid-19 pandemic emanating from China and its delay in alerting the world has merely crystallised concerns into open hostility, now percolating down to the popular level. Thus, there is bipartisan consensus for maintaining the pressure on China. The Biden administration may substitute open confrontation, which Henry Kissinger calls the two nations at the foothills of a new Cold War, with smarter containment strategies. The difficulty is that if the sanctions are rolled back, what does China offer as concessions to address America’s economic and security concerns? Michele Flournoy, a frontrunner for the defence secretary’s job, has advocated US defence readiness to have the capacity to sink the entire Chinese naval fleet in 72 hours!

There is also the technology competition symbolised by the US barring Huawei’s access to top US semiconductors. Taiwan is a key component in US advances in cutting-edge semiconductor design and production. The continuing Chinese threats to Taiwan and the US dithering over defending it, in case China tries to annex it militarily, has created strategic vacuum. Some Chinese analysts argued that if China occupies Taiwan, as it has Hong Kong, Taiwan’s famed chip producer TSMC would be a bonus.

The RCEP’s signing by two components of the “Quad” -- Australia and Japan -- queers the US and Indian approach to the Indo-Pacific. Only weeks back this group was being projected as the skeleton of a new security architecture to contain China. It was hoped the Biden administration may review US withdrawal from the Trans-Pacific Partnership (TPP), which Japan had championed to balance Chinese trade influence in the Indo-Pacific. It exists in a modified form, minus the US, as the Comprehensive and Progressive Agreement for Trans-Pacific Partnership (CATPP). It is possible the US and Japan may yet re-engage to discuss America’s re-entry, but with the RCEP finalised China has first-mover advantage. In one swoop China has negated the hype over the de-coupling from China. It also leaves India stranded, strategically and trade-wise, between its Quad partners and a China-dominated group, which has drawn away two of the Quad’s four members. Moreover, for the new US administration, the Indo-Pacific may be a lower priority than rebuilding alliances ignored or abandoned by Mr Trump and healing rifts with nations like Germany and France.

The Global Times, the largely reliable English voice of Beijing, headlined an editorial: “Indo-Pacific strategy upholder India misses the bus of RCEP and long-term growth”. India still has paths open to both joining the RCEP, albeit with diminished negotiating weight, or playing along with the US if its interest in CPTTP emerges. But in any case, all the bluster over Supply Chain Resilience Initiative (SCRI), that the Quad members were to create as an alternative to Chinese dominance of supply chains, now appears a non-starter.

Besides the fear of RCEP affecting Indian industry and farmers, including those in the dairy sector, Chinese obduracy in accepting full de-escalation at the Line of Actual Control in Ladakh has heightened Indian suspicions. Is it a coincidence that the Chinese intrusions followed India’s unwillingness to join the RCEP in November 2019, and sponsoring alternative approaches like Quad Plus? With India’s options now conditioned by the initiatives of others, New Delhi needs peace at home with farmers and in the region with neighbours. In any case, its majoritarian proclivities, with the West Bengal election approaching, can become an irritant in US-India ties just as China has outplayed it in the Indo-Pacific. In chess terms, it is not checkmate yet. But China controls the board with the better pieces.