India, Pak & Kashmiris have to work together

Malik asks the Hurriyat to “abandon Pakistan” and the political parties to “tell the boys to avoid encounter sites and stone-pelting”. 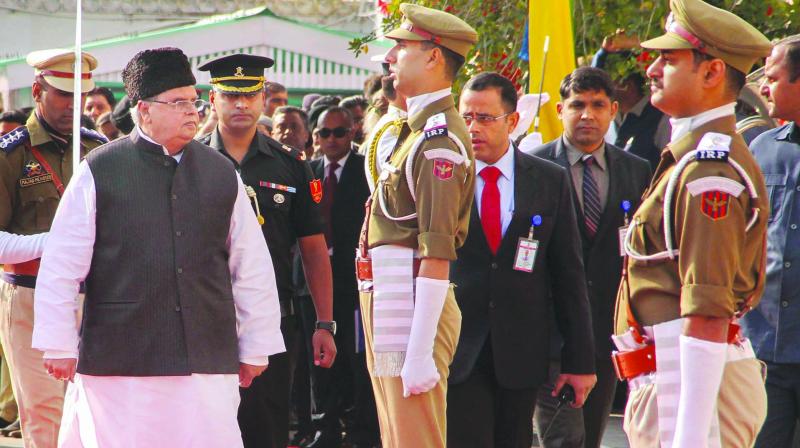 Nothing in Satya Pal Malik’s slender credentials warranted his appointment as the governor of Jammu and Kashmir in August 2018. It is, however, important to analyse his assertions because they have been the staple of Indian discourse on the Kashmir issue. On October 24, he said that Jammu and Kashmir’s political parties “have no right to talk about India-Pakistan peace talks” and asked the Hurriyat to “keep the neighbouring country aside”. This is arrogantly puerile.

The Kashmir issue has three parties — India, Pakistan and the people of Kashmir. All three must concur in the terms of its settlement, which will have to be a compromise. Force has clearly failed. The format of the dialogue has been talks between the states with the tacit understanding that, at some stage, the people’s approval will have to be obtained to any settlement.

Negotiations on Kashmir were held from November 1, 1947, onwards during a war. That day, Quaid-i-Azam Mohammad Ali Jinnah met Lord Mountbatten at the Governor’s House, Lahore. Each side presented its own precise proposal. Talks continued in New Delhi when V.P. Menon and Mohammad Ali Jinnah discussed a concrete proposal under the auspices of Lord Hastings Ismay, Mountbatten’s chief of staff. They continued all through 1948 and 1949 under the auspices of the United Nations’ Commission for India and Pakistan. The UN mediator Sir Owen Dixon held a joint conference of the Prime Ministers Jawaharlal Nehru and Liaquat Ali Khan in New Delhi. In 1953, Nehru and Mohammad Ali Bogra held talks on Kashmir. So did Zulfikar Ali Bhutto and Swaran Singh in several rounds in 1962 and 1963.

The Lahore Declaration of February 21, 1999, signed by Atal Behari Vajpayee and Nawaz Sharif bound them to “intensify their efforts to resolve all issues including the issue of Jammu and Kashmir”. The Islamabad charter of a composite dialogue listed, on June 23, 1997, “outstanding issues of concern to both sides”. Jammu and Kashmir was at the top of the list. Since then, we have had the aborted Agra Declaration and the Manmohan Singh understanding on the four points — albeit yet to be finalised — on Kashmir.

Are the people of Kashmir, who are directly affected, to have no say in the matter? The Constitution of India provides the answer. A proviso to Article 253 says: “No decision affecting the disposition” of Jammu and Kashmir “shall be made by the government of India without the consent of the (Srinagar) government”. This implies two things; a decision on the “disposition” of Kashmir is yet to be made, and the consent of its freely elected governments representing the people is indispensable.

The former foreign minister Jaswant Singh asked, “Why is Pakistan concerned with Kashmir?” One might ask why India supported the Liberation Tigers of Tamil Eelam in Sri Lanka, or why it concerns itself with Indians in Fiji?

Malik asks the Hurriyat to “abandon Pakistan” and the political parties to “tell the boys to avoid encounter sites and stone-pelting”. It is nearly a decade since they went out of control of anybody. Women wail at the windows as funeral processions of slain militants pass by, while thousands, including wanted militants, throng to their graves. It is a whole people in revolt. On May 21, 2010, Ghulam Rasool Kar, a veteran Congress leader in Jammu and Kashmir, pleaded for improvement in India’s relations with Pakistan and acceptance of the “harsh” reality of Kashmiri sentiment. “Every Kashmiri is emotionally attached to Pakistan whether they are in Congress or National Conference.”

On November 4 2007, the former Jammu and Kashmir chief minister Mehbooba Mufti said, “Naturally we are concerned. We have a sentimental and geographical affinity with Pakistan.” There were jubilant celebrations on Pervez Musharraf’s re-election as President. Activists burst firecrackers and danced in the streets of Srinagar. Why? Because he worked for a settlement.

Pakistan is not only a party to the Kashmir issue but a party within Kashmir as well. No accord will succeed unless all the three sides concur — and compromise.