The mantra of today’s India: Q is for queue

For those old enough to remember, for many years in India queueing up was not seen as a virtuous activity. 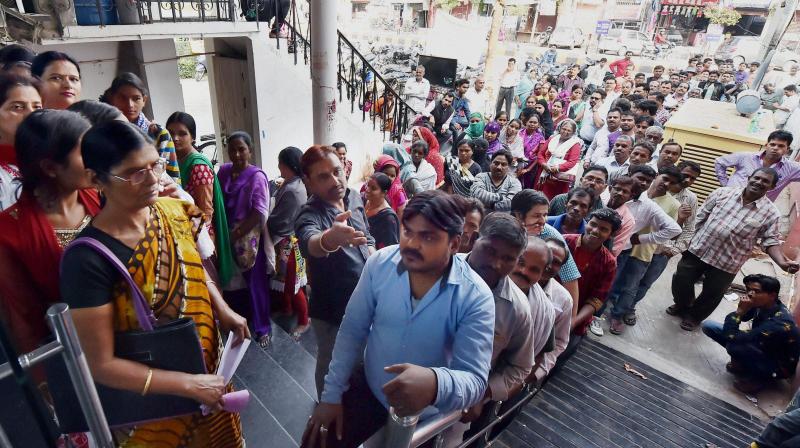 People queue up outside a bank to exchange their old Rs 1000 and 500 notes in Lucknow. (Photo: PTI)

Like beauty, demonetisation is in the eyes of the beholder. How you view it reflects not just your politics, economics, ethics, as pundits have been telling us the past week, but also your philosophy of the queue.

Is this India’s Miltonian moment? A friend with a literary bent wants to know. The reference is to John Milton’s poem, On His Blindness, and its famous last line: “They also serve who only stand and wait.”

Whether this is the right time to toss literary titbits at those standing in queues for hours outside banks and ATMs can be debated. But one thing is beyond debate — for the past week, no subject has excited Indians as much as demonetisation — the Narendra Modi government’s surprise move to scrap Rs 500 and Rs 1,000 notes overnight.

Whether this “surgical strike” against black money and funding of terror will be successful, whether this short-term pain will yield long-term gains remain to be seen. Wiser folks are holding forth on that.

But as someone who has spent a fair amount of time just waiting in queues outside banks and ATMs over the past few days, what fascinates me is the dramatic image makeover that the queue has undergone. How does the queue — a perfect metaphor for shortage economies in the socialist era — morph into a virtuous state of being in aspirational India?

For those old enough to remember, for many years in India queueing up was not seen as a virtuous activity. Before India embraced the market in the early 1990s, the government controlled the manufacture, distribution and price of a whole range of major commodities. And as many economists like Prof Jagdish Bhagwati never tire to point out, bribes became virtually the only means of accessing the latter in a reasonable time frame. Thus, for example, if you wanted a phone, car or scooter, you had to choose between a many-years-long queue and a bribe.

As a teenager growing up in that era, I remember queuing up for small luxuries that were not easily available in the market. Every week, someone at home had to queue up at a ration shop for rice, wheat and sugar. The queue was quotidian, an everyday affair, not glamorous.

In the erstwhile Soviet Union, the queue also meant varicose veins, as I found during a reporting trip to Moscow in 1991. The city was reeling from a coup attempt against then Soviet leader Mikhail Gorbachev. For the first time, I experienced the queue in a foreign land. People said: “Look, there’s a queue. Does not matter what you get at the end, you will get something.” I stood in many such queues. Outside McDonald’s restaurant at Pushkin Square, Moscow, there were two queues — the short dollar queue and the long rouble queue. The queue in front of my neighbourhood ATM last Sunday reminded me of the rouble queue.

In the outskirts of Moscow, elderly women stoically queued up for bread. Why were so few young people in the queues, I asked. “They are out working,” a woman in her 60s said. She had varicose veins from standing too long.

“People stood in line for everything — for bread, sugar, nails, news of an arrested husband, tickets to Swan Lake, furniture, Komsomol vacation tours. According to statistics, Soviet citizens spent a third of each day standing in lines,” contemporary Russian writer Vladimir Sorokin reminisced in an elegiac piece a few years ago.

Arguably, the queue is a lot more than just a relic of the socialist era. Millions of Indians stand in queues during elections. There are queues outside movie halls, for sports events. A wafer-thin minority didn’t mind queuing up when H&M opened its flagship store in Delhi.

But standing in queues for hours on successive days as a badge of patriotism — that is really a new one.

Addressing a rally in eastern Uttar Pradesh’s Ghazipur, Prime Minister Narendra Modi said: “My decision (to ban Rs 500 and Rs 1,000 notes) is like strong tea that I used to make earlier in my days as a chaiwala. The poor are loving it, while for the rich it’s in bad taste.”

The Prime Minister asked people to bear the distress for a few days, comparing the situation to a family’s tolerance of the lingering odour of wall paint for the larger good of decorating the house for a wedding. Some friends and some strangers I met in a queue in recent days tell me that they feel good they are part of a bigger cause — the war against black money — and they don’t mind the temporary inconveniences. I respect their sentiment.

But as in everything else in this country, the queue has triggered a polarising debate. Is listening to other narratives unpatriotic? My part-time domestic help tells me that her sister back home in Tamil Nadu has not eaten properly for the past 24 hours. There is no legal tender at home, no bank or post office within walking distance. She lives alone, a marginal farmer and a daily wage-earner who can’t afford to take time off. There are many such stories of deep distress from across the country.

Isn’t patriotism also about doing your work honestly and to the best of your ability?

As we, a largely cash-driven economy, seek to hurtle towards a cashless one, should we not pause a little to think about this and about other roadblocks on the way? Many reports in recent days confirm what most of us city-dwellers and plastic money users know only too well — there are huge problems with Internet connectivity.

As more people rush to ATMs, and use cards, congestion builds up. There have been reports of ATMs failing due to limited capacity. Card payment gateways are reportedly slowing down or even failing. The existing networks just can’t cope.

Is it unpatriotic to point out that Indians come in many shapes and shades and that there’s diversity in their views about the queue?