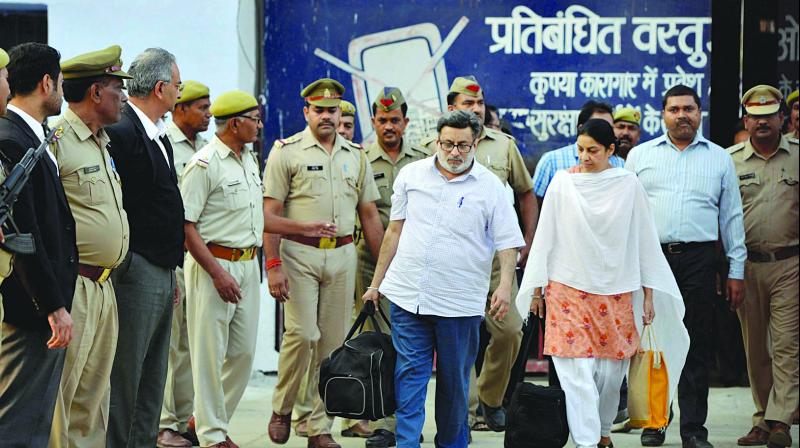 Nupur and Rajesh Talwar coming out of Dasna jail in Ghaziabad on Monday after their release. (Photo: PTI)

Rajesh and Nupur Talwar were having an impromptu pre-birthday celebration for their daughter Aarushi, at their Noida residence on the evening of May 15, 2008. Their live-in, trusted house-help Hemraj was about, as usual. Some time before 6 am the next day, both Aarushi and Hemraj were dead — the victims of horrific violence inside the house. The Talwars say Hemraj killed Aarushi, but ascribe no motive for him to have done that. Also, they have no idea who killed Hemraj, or where. His bloodied body was found on the terrace, which was locked from outside. The key to it was never found.

On May 23, 2008, the Uttar Pradesh police arrested Rajesh Talwar on suspicion of being the prime accused in the double murder. Unhappy with the way the UP police was conducting the investigation, the Talwars petitioned for the case to be transferred to the Central Bureau of Investigation. Policing is a state subject under the Constitution. Unless the state government agrees, the CBI has no jurisdiction in such cases. But then UP chief minister Mayawati had no hesitation in letting the CBI carry the ball forward.

By May 31, 2008 the CBI was officially in charge. By July 11, 2008, the CBI filed a report in the designated CBI court that there was insufficient evidence against Rajesh Talwar, who was consequently released on bail. The next three years were spent trying to find out who did it. Over this period four different investigating officers handled the case. Finally, A.G.L. Kaul, DSP, filed a closure report on January 1, 2011, citing the lack of any conclusive evidence to indict anybody.

To their credit, the Talwars contested the finding and urged further investigations. The CBI court decided to proceed with the case. But it summoned the Talwars as the accused. Courts do have this power. But more usually, this happens when the police seems dilatory in lodging a first information report, not when a closure report has been filed by the police after investigations. The Talwars, possibly shaken by being named as the accused, moved the Supreme Court for relief. But their petition was dismissed. The outcome, two years later, on November 25-26, 2013 was that the Talwars were convicted by a CBI court for the double murders.

The Talwars appealed against these convictions. The Allahabad high court has, on October 12, 2017, ruled in favour of the Talwars. It held that the lower court had erred in considering the chain of circumstantial evidence adduced as being conclusive since multiple conclusions could be drawn from the same facts. This is only temporary relief for the Talwars. The CBI has 90 days to appeal to the Supreme Court. But the CBI also has a credibility issue, particularly within the Supreme Court. In 2013 the CBI was described, by a justice of the Supreme Court as a “caged parrot” of the government of the day.

In our topsy-turvy, anything-is-possible, adversarial, judicial system, the better argued case inevitably wins. It seems a one-sided battle. The Talwars will fight for their continued liberty, the restoration of normalcy and social standing. The CBI will fight to improve its record of convictions and to show that crime does not pay. But with shoddy initial investigations and doubtful evidence, that has already been questioned exhaustively in the high court’s order. this becomes harder to achieve. Sadly, no one is fighting for Hemraj or for the wife and kids he left behind. As for 13-year-old Aarushi, it is difficult to say how she may have wanted things to pan out.

It is also tragic that despite transferring the case from the allegedly, bumbling UP police — supposedly, more familiar with law and order rather than tricky, crime investigations — to the more savvy and efficient CBI, the results are so pathetic. Justice for Hemraj and Aarushi remains elusive even a decade after.

To be fair to the CBI, conventional crime is not its core mandate. Investigation of economic offences and corruption is its forte. Since 2008, terror-related crime investigations have already been hived off to the new National Investigation Agency (NIA), which can, seamlessly, also deal with crime having national consequences or cross-state crime networks.

Conventional crime is usually dealt by the state police. The deleterious trend of frequent transfer of cases to the CBI dates to the early 1980s. It enables forum shopping, scratch my back bargains and politicisation. It also discourages state police forces from developing their expertise and practices for investigating and prosecuting crime.

The double murder does not qualify for the CBI’s attention. Delhi records 598 murders and Uttar Pradesh 4,860 murders per year. The Aarushi-Hemraj case, however horrific, is a personal tragedy of only two families. The public outcomes are negligible. Its investigation could have remained with the UP police. Transferring the case to the CBI has only muddied things at the field level and encouraged finger-pointing. The then director of the CBI had this to say, in 2014, as part of a tribute to the untimely demise of A.G.L. Kaul, SP, CBI, the last investigating officer: “Despite the many lacunae and loopholes, due to the fact that the case had been handled initially by the UP Police, (Kaul) was able to obtain a conviction.”

Till recently, there was a tendency to centralise financial and administrative resources in the Union government on the grounds of higher efficiency and rectitude. This is self-defeating. The surest way of retaining power is to distribute it to where it can best be administered. The CBI must be honed to do its primary task — bringing moneyed crooks to justice.

Central police organisations are hopelessly outdated in their staffing pattern, skills and equipment. They need knowledge and technology to collect intelligence, investigate and prosecute. Boots on the ground look great in the Republic Day parade. But they are costly and ineffective in tackling 21st century criminals. Leaner, officer-oriented, specialised and mobile security agencies are really the way to go.