Opinion   Columnists  17 Sep 2022  Anita Katyal | No one can keep up with Rahul; Kuno trees cut for Modi coterie
Opinion, Columnists

Anita Katyal | No one can keep up with Rahul; Kuno trees cut for Modi coterie

On his part, Rahul catches up on his gym regimen when yatris take a break. In addition, he gives his them tips on improving their speed 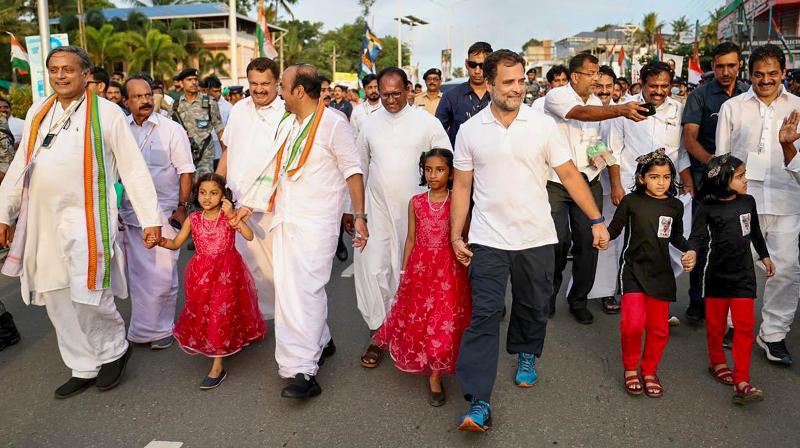 There was palpable relief in the Rahul Gandhi camp when the Bharat Jodo Yatra, led by the Congress scion, took a day’s break last Thursday after covering 150 km in a week. This is because the yatris, handpicked to accompany the former Congress president on his five-month walkathon, are having a tough time keeping pace with their leader. To make matters worse, Rahul Gandhi wants to set off on the yatra at 6 am and not 7 am as decided earlier. He has further suggested that they cover more than 25 km per day. Needless to say, no one has the courage to tell him that they are already exhausted and are finding it difficult to keep up this punishing schedule. On his part, Rahul Gandhi catches up on his gym regimen when they take a break in the evenings. In addition, he gives his fellow yatris tips on improving their walking speed. The first lesson is: get good walking shoes.

Meanwhile, the Bharat Jodo Yatra did not get off to a flying start for the firebrand former JNU student leader Kanhaiya Kumar, who was inducted into the Congress with great fanfare. Under the impression that he is high up in the Congress Party’s pecking order, Kanhaiya Kumar was unhappy when he was not seated on the dais when Rahul Gandhi addressed a public rally to kickstart the yatra from Kanyakumari. According to reports from the venue, when the young leader found himself in the same enclosure as other junior party members, Kanhaiya Kumar made a dash towards the dais. When stopped at the barricade by the security personnel, Kanhaiya Kumar jumped over it to get close to the party leadership. But clearly, he did not bargain for the rough treatment meted out to him by the security men on duty. He had to be rescued by party members in the audience. A chastened Kanhaiya Kumar later made a statement by participating in the yatra in his chappals while the others wore fancy walking shoes.

As the process for the election of a new Congress president gets underway, speculation about the next party chief has intensified. Working on the assumption that Rahul Gandhi is not interested in his old job, Rajasthan chief minister Ashok Gehlot tops the list of contenders for this post. Mr Gehlot is seen as the chosen one following reports that Congress president Sonia Gandhi had asked him to take on this responsibility. However, there’s a twist in this tale. Mr Gehlot is apparently not keen on moving out of his home state and leaving the field open for his bete noire, Sachin Pilot, though he will eventually abide by Sonia Gandhi’s decision. Meanwhile, Congress general secretary Mukul Wasnik, another Gandhi family loyalist, has now raced ahead, especially after he was divested of the charge of Madhya Pradesh. Mr Wasnik was among the 23 Congress leaders who had appended their signatures to a letter to Sonia Gandhi pressing for a more effective leadership and an organisational overhaul. Mr Wasnik’s inclusion in the list of pro-changers had come as a surprise but he soon returned to the party fold. It is believed Mr Wasnik was actually a mole in the dissident camp. Senior leader Mallikarjun Kharge is also a strong possibility.

If the Congress is in the throes of a discussion on its next president, the Bharatiya Janata Party is not far behind. BJP president J.P. Nadda’s three-year term ends early next year and though the party constitution allows two consecutive terms for the president, there are murmurs about a possible change. These internal conversations may be linked to the year-end Himachal Pradesh Assembly polls as Mr Nadda could well be considered for the chief minister’s post in his home state. There is also talk that Prime Minister Narendra Modi and home minister Amit Shah, who call the shots in the government and the party, would prefer that either environment minister Bhupendra Yadav or HRD minister Dharmendra Pradhan take over the reins of the party.  Both Mr Yadav and Mr Pradhan are hot favourites of the two leaders. Their rise in the party has been meteoric, having been entrusted with important assignments. It is to be seen if the party’s ideological mentor, the Rashtriya Swayamsevak Sangh, is in agreement with a change of guard.

Prime Minister Narendra Modi’s decision to personally release the eight cheetahs brought from Namibia in Madhya Pradesh’s Kuno Wildlife Sanctuary created major logistical difficulties for the organisers. The sanctuary has only one guest house but with the Prime Minister coming for the release, close to 300 hundred people, all VIPs, confirmed their presence for the programme. With no place to accommodate them, the organisers decided to pitch tents for their stay. And this entailed the cutting of a large number of trees. Not just that, but trees were also chopped to make a helipad to enable Mr Modi’s helicopter to land. Clearly, a far cry from the Prime Minister’s emphasis on conservation.