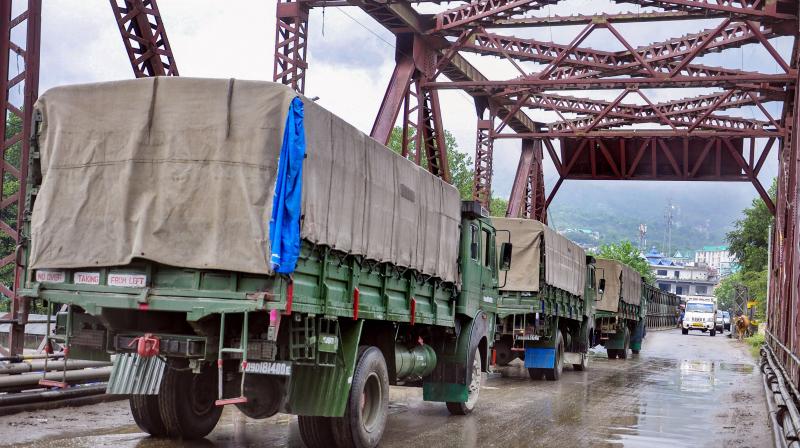 It has been over 100 days now that the Chinese are squatting on Indian territory. They are refusing to move back.

Neither the government nor any former official or for that matter any strategic thinker has answered the basic question — Why have the Chinese occupied our land? The Chinese, of course, choose to deny that they are in our territory and profess they are only at best on their perception of the Line of Actual Control.

For the sake of argument even if you buy the Chinese explanation, their behaviour still is in stark contrast to 1962 where the Chinese were tactically successful in the eastern sector.

After launching an unprovoked aggression then they still chose too retreat 20 kilometres not from their professed claim line but from the Actual Ground Position as on November 7, 1959. The Chinese ceasefire declaration of November 19, 1962, stated as follows — “Beginning from 21 November 1962, the Chinese frontier guards will cease fire along the entire Sino-Indian border.

Beginning from 1 December 1962, the Chinese frontier guards will withdraw to positions 20 kilometres (12 miles) behind the line of actual control, which existed between China and India on 7 November 1959.

In the eastern sector, although the Chinese frontier guards have so far been fighting on Chinese territory north of the traditional customary line, they are prepared to withdraw from their present positions to the north of the illegal McMahon Line, and to withdraw twenty kilometers (12 miles) back from that line.
In the middle and western sectors, the Chinese frontier guards will withdraw 20 kilometres (12 miles) from the line of actual control.”

What is the salience of November 7, 1959? It was on this date a seminal proposal was made to Pandit Nehru by the then Chinese premier Chou-en-Lai.

Excerpts from that letter are worth quoting: “In order to maintain effectively the status quo of the border between the two countries, to ensure the tranquility of the border regions and to create a favourable atmosphere for a friendly settlement of the boundary question, the Chinese government proposes that the armed forces of China and India each withdraw 20 kilometres at once from the so-called McMahon Line in the east, and from the line up to which each side exercises actual control in the west, and that the two sides undertake to refrain from again sending their armed personnel to be stationed in and patrol the zones from which they have evacuated their armed forces, but still maintain civil administrative personnel and unarmed police there for the performance of administrative duties and maintenance of order.

This proposal is in effect an extension of the Indian government’s proposal contained in its note dated September 10 that neither side should send its armed personnel to Longju, to the entire border between China and India, and moreover a proposal to separate the troops of the two sides by as great a distance as 40 kilometres.

If there is any need to increase this distance, the Chinese government is also willing to give it consideration.

If this proposal of the Chinese government is acceptable to the Indian government, concrete measures for its implementation can be discussed and decided upon at once by the two governments through diplomatic channels”.

In his reply on November 16, 1959, Nehru after extensive consultations both in the Congress Working Committee and his Cabinet rejected the proposal for all the right reasons outlined in that letter except insofar it applied to Ladakh.

He wrote “I suggest, therefore, that in the Ladakh area, both our governments should agree on the following as an interim measure. The Government of India should withdraw all personnel to the west of the line which the Chinese government have shown as the international boundary in their 1956 maps which, so far as we are aware are their latest maps.

Similarly, the Chinese government should withdraw their personnel to the east of the international boundary, which has been described by the Government of India in their earlier notes and correspondence and shown in their official maps.

Since the two lines are separated by long distances, there should not be the slightest risk of border clashes between the forces on either side.”

One can only speculate that had Nehru accepted Chou’s proposal the trajectory of Sino-Indian relations could have been different.

Since 1962, India and China have had a number of standoffs but eventually they were all surmounted some with casualties and others without any loss of life.

Even Doklam that persisted for 73 days was eventually cracked through a fortnight of diplomatic negotiations in 2017. However, the current crisis is substantively distinctive for both Chinese belligerence and brazenness.

They have killed 20 Indian soldiers and injured numerous more in at least three clashes in Ladakh alone. Ten Indian soldiers were taken hostage and subsequently released by the People’s Liberation Army.

Despite both foreign ministers speaking to each other, Doval confabulating with his special representative equivalent, numerous conferences of the working mechanism for consultation and coordination on India-China borders affairs, five corps commander level exchanges and other tactical level military talks, the Chinese are not budging.

In fact, in the July issue of the China-India Review, Ambassador Wei Sun Weidong has squarely blamed India for the current crisis. Unlike this government that pulled documents of the MOD website.

China has effectively moved the Line Actual Control westwards by creating new facts on the ground along the entire LAC in Ladakh.

They have instigated Nepal and Pakistan to indulge in cartographic aggression. The question, however, remains, why? Did Prime Minister Modi renege on some commitments given to President Xi in Wuhan and Mamallapuram, is it about distance from the US, accepting China’s new hedonistic world order or all of them? Till the time we do not know what the Chinese want we will not be able to deal with them effectively going forward.