The crisis in Venezuela: Will Chavez’s reforms last? 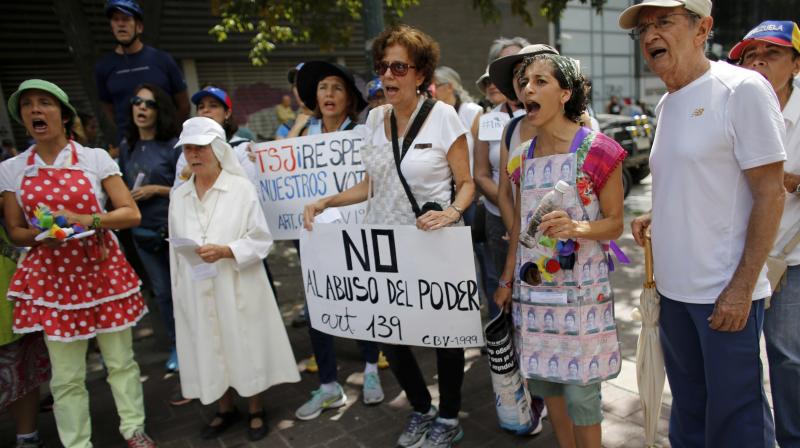 Anti-government demonstrators shout slogans against Venezuela's President Nicolas Maduro during a protest against him in Caracas, Venezuela. (Photo: AP)

It was almost 20 years ago that Hugo Chavez threatened to upset the established order in Latin America with the first of his many electoral victories. Six years after he had led an abortive coup attempt in Venezuela, he decisively won the 1998 presidential election and set about ushering in the transformation he had in mind.

One of his first steps was to bring in a new constitution, which won approval in a popular vote. That Chavez’s chosen successor, Nicolas Maduro, is now determined to rewrite that constitution, seemingly against the popular will, is widely viewed as a desperate gamble by a leader who is out of his depth, yet determined to cling on to power.

Maduro was elected president by a small margin in 2013, largely on the basis of his predecessor’s imprimatur, after Chavez sadly succumbed to cancer in 2013, but the parliamentary elections two years later yielded a substantial majority for the disparate opposition. The constituent assembly that Maduro has assembled following a disputed electoral exercise is obviously intended to override that democratic disadvantage. But it marks a significant break with Chavismo, given that none of the elections that sustained Chavez in power was manipulated.

Venezuela’s crisis isn’t exactly of Maduro’s making. Chavez had a reasonably clear agenda that he was willing to articulate, even if he never quite rivalled the oratorical staying power of his Cuban comrade and mentor Fidel Castro. Maduro’s copycat bluster, on the other hand, increasingly does not pass muster. It’s not just that he lacks Chavez’s charisma and sense of humour: he also appears to be bereft of any good ideas about countering the crisis in which Venezuela has become embroiled.

The crisis, signified by severe shortages and rampaging inflation, isn’t exactly of Maduro’s making. He inherited many of the problems, which were exacerbated when Chavez’s demise more or less coincided with a sharp dip in oil prices on which Venezuela has long relied for its revenues. There can be little question, though, that the level of economic mismanagement has risen in the past few years.

At the same time, the US-backed forces of neoliberalism that resisted Chavez from the get-go and almost succeeded in toppling him in 2002, but were never quite able to seriously dent his popular appeal, found a much easier target in Maduro.

Initially, it was arguably Chavez’s anti-imperialist foreign policy rather than his government’s domestic measures that led Washington to back efforts to unseat him. It’s useful to remember that the New York Times and Washington Post, supposed paragons of liberal virtue, celebrated the 2002 coup attempt with as much enthusiasm as factotums of the George W. Bush administration.

There can be no doubt that, alongside its international initiatives, the Chavez administration implemented a domestic agenda that vastly reduced poverty and brought literacy and healthcare to many Venezuelans who had little or no experience of either. However, the redistribution of national resources was reformist rather than revolutionary, and the earlier beneficiaries of neoliberalism for the most part retained their disproportionate wealth. The international liberal brotherhood lost no opportunity to call out what it saw as Chavez’s excesses, not least in actions against a virulently oppositionist media owned mostly by oligarchs with vested interests, but tended to be complacent about consistent efforts to undermine the popularly elected government’s progressive agenda.

The disparate opposition arrayed against Maduro’s regime certainly contains democratic elements - including an increasing number of ex-chavistas - but it substantially consists of forces that have all along viewed Chavez’s vision of a more equal and less exploitative society as anathema. And let us also not forget that successive US administrations, both directly and through so-called think thanks such as the Atlas Foundation, have consistently striven to undermine social-democratic impulses in Latin America.

Washington was particularly disconcerted by the fact that the Chavez phenomenon ushered in a ‘pink tide’ pretty much through its backyard. The backlash against neoliberal civilian governments that has replaced equally neoliberal military dictatorships the US so insouciantly sponsored in the continent until well into the 1980s, was alarming - even though, admittedly, no administration went quite as far as threatening military action, as Donald Trump has done.

That pink tide has lately receded, notably through democratic means in Argentina and undemocratic ones in Brazil. The fate of Venezuela, though, remains to be decided, and perhaps the biggest risk is that once the nation moves into its next phase, violently or otherwise, it may be too late to preserve some measure of the socioeconomic gains that Chavez brought to the dispossessed. Should that turn out to be the case, Maduro will go down in Venezuelan history as one of the culprits responsible for it.