While the mistake was detected and the photo removed, it had managed to go viral on social media platforms 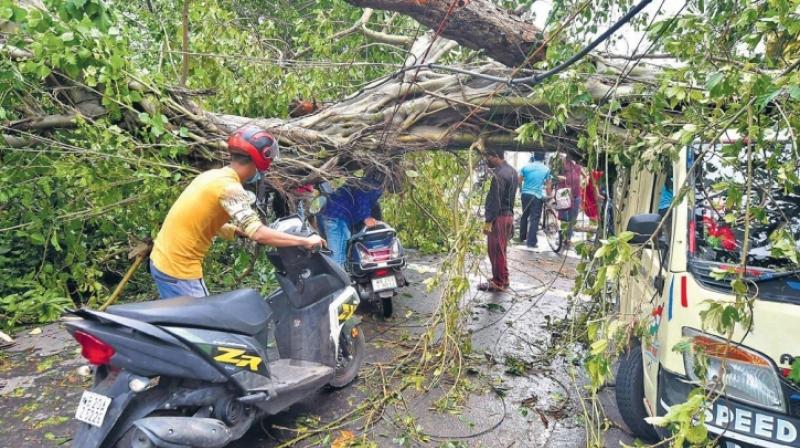 In the wake of the Cyclone Amphan and the relief work being undertaken, the person handling the ministry’s Facebook account uploaded a picture of a table with snacks and two whiskey bottles. AFP Photo

A week after the Facebook fiasco, the ministry of home affairs (MHA) has replaced the entire media team. In the wake of the Cyclone Amphan and the relief work being undertaken, the person handling the ministry’s Facebook account uploaded a picture of a table with snacks and two whiskey bottles.
While the mistake was detected and the photo removed, it had managed to go viral on social media platforms.

According to sources, senior Indian Information Service officer Nitin D. Wakankar now leads the new media team, while his predecessor Vasudha Gupta has been moved out as director-general of the fact-checking unit of the Press Information Bureau (PIB).

Mr Wakankar earlier served as spokesperson of CBI and the defence ministry. It is also learnt that deputy director in MHA, Virat Majboor, has been moved to All India Radio.

Apparently, this was not the only “goof-up” and Amit Shah is not known to tolerate sloppiness from the babus in his ministry. The media team had made a fatal error by not listing Modi-Shah’s Citizenship Amendment Act among the achievements of the ministry and the government in its reports. Obviously, that is simply unforgivable!

The appointment of additional chief secretary (home and vigilance) Vishwas Mehta as the new chief secretary of Kerala has quelled the rumours swirling around the likely successor to Tom Jose who retired this month.

With Mr Mehta vacating the key home secretary post, his replacement will necessitate changes in other departments as well. According to sources, additional chief secretaries T.K. Jose and Asha Thomas and principal secretary V. Venu are among the frontrunners for the home secretary’s post.

Another senior 1989 batch officer, Devendra Kumar Singh, has left the state on Central deputation as additional secretary and development commissioner of Union ministry of micro, small and medium enterprises. He was holding the charge of additional chief secretary (agriculture) in the state.

However, many observers do not expect the reshuffle to include district collectors, at least for a few more months, as it may affect the efforts to control the Covid-19 virus on the ground. The exception could be Kottayam district collector P. Suresh Babu, who is retiring. Meanwhile, the state government has empanelled the 1990 batch officers for elevation as additional chief secretaries.

Those in the list are Alkesh Kumar Sharma, V. Venu, G. Kamala Vardhana Rao and Sarada Muraleedharan. Except for Mr Rao, all others are serving in the cadre, while Mr Rao is on central deputation as chairman of India Tourism Development Corporation.

Rajiv Topno, private secretary to Prime Minister Narendra Modi, and Brajendra Navnit, joint secretary in the Prime Minister’s Office (PMO), are now heading to the World Bank and the World Trade Organisation (WTO) respectively. Their appointments are among some plum foreign assignments announced by the Modi sarkar.

The exit of these senior IAS officers is not due to having fallen out of favour in the all-mighty PMO, but rather is being seen as a reward for their loyalty to the PM. After all, Mr Topno, a 1996-batch Gujarat cadre officer, has been Modi’s private secretary since 2014.

Similarly, Mr Navnit who is from the Tamil Nadu cadre was made joint secretary during a reshuffle in 2016 and was given an extension in service last year. While Mr Topno will be a senior advisor to the executive director, World Bank, under the department of economic affairs, Mr Navnit is India’s ambassador and special representative to the WTO under the commerce ministry.

Their appointment is significant, coming smack in the middle of the Covid-19 epidemic that has wrecked economies and world trade. As two important global institutions, both the World Bank and WTO will play a key role in helping battered economies recover from the growth slump and improve trade.

Mr Modi will count on these babus to represent India’s economic and trade-related goals.

Besides Mr Topno and Mr Navnit, the Appointments Committee of Cabinet (ACC) also named five other officials for foreign assignments. These officials will work on improving commercial ties with countries such as the US, China, Switzerland, the Philippines and Belgium. The others are Ravi Kota, Anwar Hussain Shaik, N. Ashok Kumar, Lekhan Thakkar and H. Atheli.