Nilanjan Mukhopadhyay
The writer is an author and journalist based in Delhi-NCR. His latest book is 'The Demolition and the Verdict: Ayodhya and the Project to Reconfigure India', and he’s also the author of 'Narendra Modi: The Man, The Times'. He tweets at @NilanjanUdwin.

As recent events demonstrate, every party prefers having the law enforcers acting as a private militia 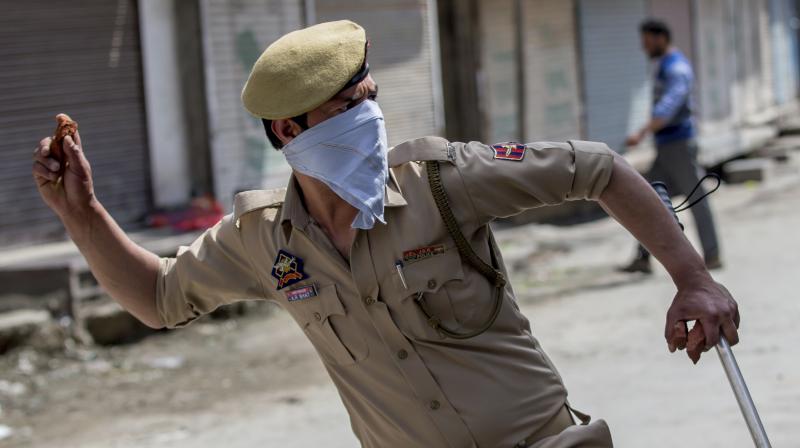 The repeated use of questionable tactics by state police forces points to a deeper malaise. (Representational Image/ AP)

There is an old turn of phrase in Hindi — Tu ser, toh main sawa ser (If you are base, I am ace). This game of one-upmanship had recently been played between the BJP and the Aam Aadmi Party. The “ball” in this case is the spokesperson of the Delhi BJP unit, Tajinder Pal Singh Bagga, and the “forwards” of the two teams are the police forces of Delhi, Haryana and Punjab. The police personnel of the first two states were trying to ensure that Mr Bagga remains “free” to do what he has always done in politics — whip up melodrama. Likewise, the Punjab police force was trying to “pocket” him, to enable the AAP leaders to send a clear message to the BJP brass that they have now “arrived” and can leverage a state police force, unlike in Delhi, where the control of the police lies with the Central government (read BJP), through the lieutenant-governor, despite Arvind Kejriwal’s party being in “power” in the city-state for the past seven years.

There are “midfielders” too in this disquieting drama which spells danger with a capital “D” for Indian democracy — the members of the judiciary at various levels. More often than not, they pass orders that please their immediate masters. Mr Bagga, for now, has got protection from arrest till July.

Barely a few weeks prior to this tug-of-war over Mr Bagga, a somewhat similar drama was enacted, with Independent Gujarat MLA Jignesh Mevani as the “catch”. The difference, however, was that the police forces of the two states where the repugnant and high-handed saga unfolded — Assam and Gujarat — were on the same side, both ruled by the BJP. Eventually, a rare district court judge spoke up for the MLA and declared the Assam police case against him as “fabricated”. In the episodes involving Mr Mevani and Mr Bagga, there was a striking similarity — the police forces of the states were not acting on their own volition, but only following the verbal diktats of the state governments.

Noticeably, Mr Mevani was detained at the BJP’s behest for freely articulating his opinion. But the BJP stepped in for Mr Bagga after the Punjab police, at the AAP’s prodding, felt he had crossed the line. Several editorial columns can be filled by itemising the cases of high-handedness from the past when state police forces acted as puppets in the hands of the state governments to browbeat political opponents.

These two instances, and almost every similar episode, play out at two levels — the political arena and the nagging issue of politically dominant parties in states, and the Centre, misusing the police for partisan ends. Indians have got used to a single narrative running endlessly. Parties in power in the states or the Centre misuse the police and convert it into a department or division of the political establishment and the Indian Penal Code and other questionable laws like UAPA are used as weapons against opponents who are detained, as Central forces, the state police and other investigating agencies routinely violate the spirit of federalism. They cross into territories over which their jurisdiction is restricted or questionable. This unspools in a changed political culture where the principle of a person being considered innocent till proven guilty has been replaced by the belief that a person is guilty till she/he can prove innocence.

In the latest cases of the thumbing down of democratic and institutional norms, Mr Mevani is problematic for the BJP as Assembly polls are due in Gujarat in November, and this explains why he had to be penalised. In contrast, the BJP had to keep Mr Bagga safe from the AAP’s designs not due to any standing within the party, but for his high-decibel value on the social media and television.

Mr Bagga’s defence underscores the importance of trumpeters in the BJP’s rise. Also, the AAP’s offensive has to be repelled for two reasons. One, the free run for Mr Bagga was ordered from the top and his arrest was an affront to the BJP’s top brass. Two, after its success in Punjab and getting off the block in Goa, the AAP has entered the battleground in Himachal Pradesh and Gujarat. The BJP is nervous as in Arvind Kejriwal they see a potential rival and a challenger to the Congress and Rahul Gandhi’s position as the potential fulcrum of an anti-BJP front for 2024.

The repeated use of questionable tactics by state police forces points to a deeper malaise. It is routine for all political parties, whether the BJP or Opposition parties, to weaponise the police in targeting adversaries. This leads to politicisation of the law and order machinery, and undermines the primary nature of democracy.

The need to insulate the police, and agencies’ investigative wings, from various governmental pulls and pressures, has been felt for long. The Janata Party government appointed the National Police Commission in 1977 and gave it wide terms of reference. Besides scrutinising the police organisation, its role, functions, accountability and relations with the public, it was also asked to examine political interference in its work as well as misuse of its powers. This commission, the first at the national level after Independence, penned eight voluminous reports between 1979 and 1981 and suggested across-the-board reforms in the existing police setup. Little has been done since.

Over a quarter century ago, in 1996, two retired directors-general of police, Prakash Singh and N.K. Singh, filed a PIL in the Supreme Court asking if any recommendation was ever implemented. The court in its wisdom took a decade to come up with the ruling that is referred to as the Prakash Singh case. It issued seven binding directives which were to be complied with. The court’s utmost concern was with ways to limit political control of the police by the government of the day. In the Supreme Court’s view, the main role of the police was as primary protectors of the rule of law. For this, it was essential that the force remained apolitical and incontestably fair and unprejudiced.

Sixteen years after that landmark ruling, only lip service is paid to the issue of police reforms. As recent events demonstrate, every party prefers having the law enforcers acting as a private militia. If this practice is to be ended, the initiative must come from the Centre. The BJP must stop misusing the police and investigative agencies to wage political battles. If this practice continues, there will be serial incidents and the BJP will have to repeatedly rise to defend its rank and file.