Roadside Romeos have apparently been mimicking the Prime Minister, using the same catcall, when they see women on the streets of Kolkata 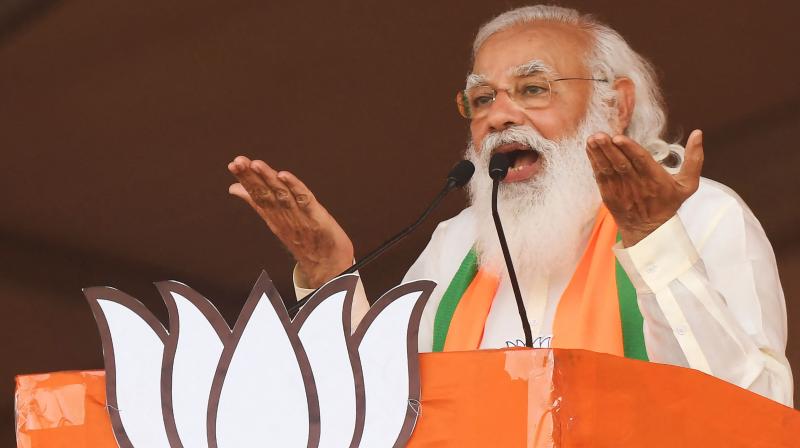 Women leaders belonging to the TMC have also slammed the Prime Minister, saying this was not just an insult to an elected chief minister but to all women. (Photo: AFP)

Prime Minister Narendra Modi’s war cry “Didiii O Didiii, Arrey Didiii” (referring to Mamata Banerjee) at all public rallies in poll-bound West Bengal has predictably angered the Trinamul Congress, more so as it has become a source of inspiration for eve-teasers. Roadside Romeos have apparently been mimicking the Prime Minister, using the same catcall, when they see women on the streets of Kolkata. Many of them have even been arrested by the police on charges of harassment. Five women have filed an FIR at the Amherst Street police station while the Bengal Citizens Forum has lodged a strong protest, saying the catcalls were a penal offence. The Forum also took out a protest march and submitted a complaint to the Election Commission, which is still pending. Women leaders belonging to the TMC have also slammed the Prime Minister, saying this was not just an insult to an elected chief minister but to all women.

Madhya Pradesh chief minister Shivraj Singh Chouhan was personally reluctant to impose a lockdown but he was literally pushed into doing so by his bureaucrats who did some plain speaking to him about the need for drastic measures given the alarming spike in Covid-19 cases in the state. Though Mr Chouhan did go by the advice of his officers, informal instructions were conveyed to the lower rung bureaucracy that the lockdown need not be implemented strictly and that people moving out should not be penalised. And the Damoh constituency where a bypoll was held last week, was deliberately exempted from adhering to the lockdown to allow political parties to organise their election rallies. They were helped in this effort by the local election commission officials who went to town with the slogan, “Corona se nahi darenge, matdan hum zaroor karenge”, urging voters to come out in large numbers on polling day. Incidentally, while Mr Chouhan was battling the alarming rise in infections, his health minister Narottam Mishra was busy overseeing the Assembly poll in West Bengal. Mr Mishra reached his home state a few days before the bye-election in Damoh which happens to be his stronghold.

Delhi chief minister and Aam Aadmi Party chief Arvind Kejriwal has a lot in common with AIMIM president Asaduddin Owaisi. Either it is deliberate or inadvertent, but the leaders end up helping the Bharatiya Janata Party by entering an electoral fray resulting in the weakening of the Congress. Mr Owaisi did so in Bihar and Mr Kejriwal in the Gujarat local elections. In fact, there is talk that the two parties even receive covert funding from the BJP.

Currently, AAP is focusing on expanding its footprint in Uttarakhand. To that extent, it has initiated a vigorous recruitment drive and is positioning itself as a credible alternative in the hill state. Interestingly, Mr Kejriwal is concentrating on the Kumaon region, which is where the Congress has strong roots, and not on Garhwal which is known to be the BJP’s fiefdom. Given the anti-incumbency against the BJP in Uttarakhand, the Congress has a chance of coming back to power here. But Mr Kejriwal could well end up playing spoilsport, much to the BJP’s delight.

There appears to be no end to the raging battle in the upper echelons of the prestigious India International Centre even four years after eminent jurist Soli Sorabjee was forced to step down as the Centre’s president though he retains his position as life trustee on the IIC board. Mr Sorabjee’s tenure was cut short in 2017 following a spate of allegations of financial impropriety and bungling in the admission of members. A fresh attempt was made recently at the IIC annual general meeting to debar Mr Sorabjee and Justice Srikrishna from holding any office. It is not clear why this matter was raised after four years. The resolution was, however, not approved as several members pointed out that such a drastic action could not be taken in the absence of the two trustees and without giving them an opportunity to have their say. It must be mentioned that an enquiry committee was set up to probe the charges against Mr Sorabjee but little is known about its report.

The surprise victory notched up by the Tripura scion Pradyot Kishore Deb Barman’s fledgling party in the recent election to the Tribal Areas Autonomous District Council, proved to be a major embarrassment for the Congress. Not only did the party finish fourth but Mr Barman who had been the Tripura Congress president left following differences with the party’s Northeast in-charge Luizinho Faleiro. Apparently, Congress leader Rahul Gandhi had got in touch with Mr Barman last year when he was in the US and asked him to rejoin the Congress. Mr Barman was willing to do so but was unable to get in touch with Rahul Gandhi as he had changed his phone number on his return from America and his staff was not very helpful in organising a meeting with the Nehru-Gandhi scion. Mr Barman then decided to float his own party.