The dalits deserted the Congress, for which they have been voting a long time, and backed the BJP in 2014. 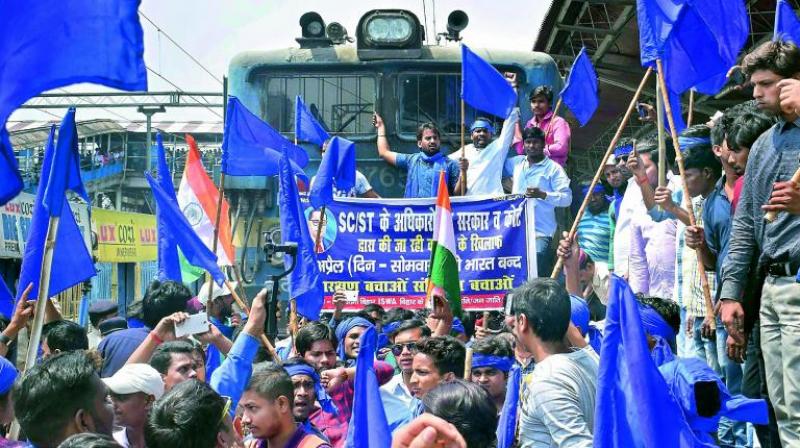 It is important to note the country did not see the dalits protest only recently on April 2 against the dilution of the SC/ST Prevention of Atrocities Act, there have been various other protest in the past few years, a clear sign of deep dissatisfaction of dalits with the BJP government. (Photo: PTI/Representational)

The anger among dalits against the BJP government at the Centre, which is visible from the nationwide protests against the dilution of the Scheduled Caste and Schedule Tribe (Prevention of Atrocities) Act 1989, may damage the BJP’s prospects in 2019. Not only are dalits angry against the dilution of this law, they are also angry due to various incidents of atrocities against dalits in many parts of the country and the government’s seeming inability to handle it. Besides other factors, a sizeable chunk of support from dalits had helped the BJP get a majority in 2014. A shift among dalits away from the BJP towards the Congress, particularly in states with a sizeable dalit population, may dampen the electoral prospects of the BJP and may help in a revival of the Congress, though the Congress may still be far from coming anywhere close to defeating the BJP in 2019.

Dalits are in sizeable numbers in various states where the BJP did very well in the 2014 Lok Sabha elections as well as in the Assembly polls held after the Lok Sabha elections. Dalits constitute more than 20 per cent of the total voters in states like Haryana (20 per cent), Punjab (32 per cent), Tamil Nadu (20 per cent), Uttar Pradesh (021 per cent) and West Bengal (24 per cent). There are other states where dalits are in sizeable numbers, which include Andhra Pradesh (16 per cent), Bihar (16 per cent), Karnataka (17 per cent), Madhya Pradesh (16 per cent), Odisha (17 per cent), Rajasthan (18 per cent) and Delhi (17 per cent). In most of these states, the BJP did very well either on its own or in alliance with other parties. In Haryana it polled 35 per cent votes, in Punjab it performed very well along with alliance partner Akali Dal, in Uttar Pradesh its voteshare was 42 per cent, in West Bengal it managed to get 17 per cent votes, in Bihar its voteshare was 30 per cent, in Karnataka 43 per cent while it was 54 per cent in Madhya Pradesh and Rajasthan. In Delhi its voteshare was close to 50 per cent. The party couldn’t manage to win a large number of seats in Odisha, but it polled over 20 per cent votes.

It is important to note the country did not see the dalits protest only recently on April 2 against the dilution of the SC/ST Prevention of Atrocities Act, there have been various other protest in the past few years, a clear sign of deep dissatisfaction of dalits with the BJP government. The Una killing in Gujarat last year and the suicide of Rohit Vemula at the Hyderabad University campus had also triggered nationwide protests. There were protests in states like Karnataka, Kerala, Andhra Pradesh and parts of Uttar Pradesh. There are even reports about the police being violent against those who took part in the April 2 protests. There have been instances of the vandalisation of Dr B.R. Ambedkar’s statue in various areas. All these incidents have certainly angered dalits and the government’s inability to control such incidents have made them feel unhappy with the BJP government. This could have implications regarding dalit support for the BJP in the 2019 Lok Sabha elections. A dalit shift away from the BJP will adversely affect its electoral prospects as there is hardly any group which seems to compensate for the loss of this dalit support.

No wonder alarm bells are ringing loud for the BJP’s leadership. Sensing dalit anger against the dilution of the SC/ST Act, the government was quick to file a review petition in the Supreme Court. With barely a year for the big national election, the government is trying hard to send out signals that it is sincere about the dalit cause. Every year the nation celebrates April 14 as Ambedkar Jayanti, and the government does participate, but this year it appears to have made an extra effort. Prime Minister Narendra Modi and various Central ministers took an active part in many of the celebrations to pay tribute to Dr Ambedkar. Also, BJP MPs visited dalit-dominated areas and garlanded Dr Ambedkar’s statues amidst other programmes. But do these efforts indicate that the ruling party is really concerned about the uplift of dalits, or are they just gestures on the eve of a major general election?