The question about the hijab is a political issue. And we must get at the facts as to why and when the issue became a contentious one 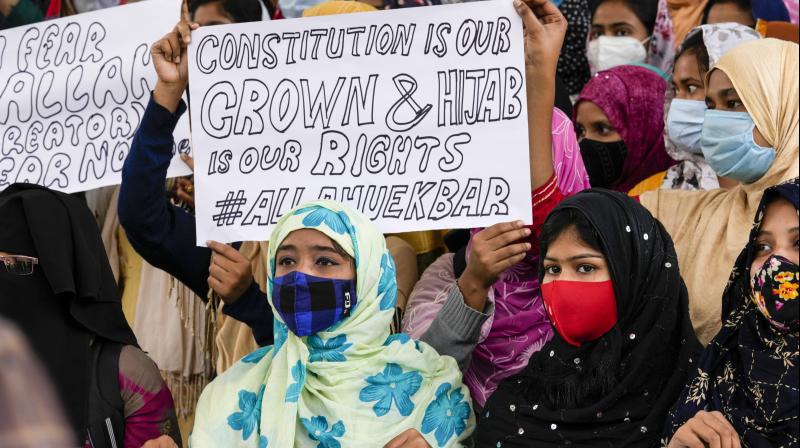 Students participate in a procession to protest against barring Muslim girls wearing hijab from attending classes at some schools in Karnataka. (AP file photo)

The three-judge bench of the Karnataka high court has flatly rejected the petition of the six girls from the Pre-University Government College in Udupi and others from Kundapur and Bengaluru that the hijab is an “essential part” of Islam. The court had to limit itself to the narrow ambit of the words of the Quran and arrive at a reasonable conclusion. Religious scholars and linguists can always argue that the words of the Holy Quran’s text mean more or less than what they stand for, and there are implicit meanings. The judges did what they could. The petitioners had perhaps posed the wrong question.

This entire controversy was not about what is essential or not essential to be a true Muslim. This is about the social practices of lower-middle-class conservative families in Mangaluru and many other places in India. Long-held social practice should be respected not on the grounds of what the religious texts say but on custom. In every type of law, from the Anglo-Saxon common law which we have adopted in India to other kinds of codified religious laws, the rules are partly based on written texts like the scriptures and often on unwritten social customs. But here we are not really discussing the finer points of scripture, law and custom. Things are more convoluted and confusing because we have this muddled definition of secularism, where we do not know whether all religions are to be kept out or all religions should be allowed. It is not surprising therefore that everyone grabs the aspect that serves their purpose best.

The Udupi-Mangaluru-Bengaluru question about the hijab is a political issue. And we must get at the facts as to why and when the issue became a contentious one. It is surprising that no one has asked as to what the practice has been all these years? Did the girls who wanted to wear the hijab wear it in the prescribed colour of the uniform, or did they start to wear it only recently? This does not mean that the girls involved in the matter cannot change their minds and choose to wear the hijab when they want to, and it would not be right to say that since they did not wear it earlier, they cannot wear it now. When they choose to change is the right of all individuals. Also, when did the school authorities decide that they would not allow the hijab as part of the uniform. Is there is a government circular about uniforms, with the specific indication that the hijab is prohibited. The political motives are such that no one seems ready to clarify these issues. It can only be conjectured that the Hindu communal elements in the school administration chose to act against the hijab, and the six students chose to defy the order. It is usually the case that Hindu communal elements praise the virtues of secularism when they want to pin down the Muslims, and the Muslims on their part ironically use secularism either to defend their religious identity and defy secularism when they feel that it intrudes upon their perceived religious identity. This political tussle between religious groups should not be a surprise because this is the stuff of social and political struggle for domination.

The Mangaluru belt has been witnessing communalism, and it would be futile to argue about who started it first. The Hindu communalists have been ranting about “love jihad” and the Muslims and Christians in the region have been complaining about discrimination as the hands of the Hindu authorities.

Given the basic hostility that has been foisted on the relations between the communities, every issue is turned into one of confrontation. So, a Muslim boy cannot love a Hindu girl, and a Hindu boy cannot love a Christian girl if the fanatics in all communities were to have their way. At the social level, families and elders in all the communities tend to be conservative, and there is also the general inter-generational conflict. But when the BJP, the Rama Sene, the ulema and the People’s Front of India get into the act, the poison of communalism is hugely amplified.

It is no secret that the BJP, the All-India Muslim Personal Law Board (AIMPLB) and the Jamiat Ulema-e-Hind would want to get involved and prescribe to their respective communities what the norms are. A large majority of Hindus and a large majority of Muslims may even want to follow the diktat of these organisations. The question then is how to resolve the confrontation. India has become a communalised country, thanks to the BJP, AIMPLB, et al. The challenge is how to defang them and restore sanity in inter-community ties. Many communal Hindus want to object to the hijab, and many communal Muslims would want to insist on the hijab to assert their identity in the face of communal Hinduism. Every side has its own set of arguments, however, poisoned, to defend their positions. From a libertarian point of view, it would be wrong to tell communal Hindus and communal Muslims to be rational and not hate each other.

It is possible for the Udupi PU Government College to let these six girls wear the hijab without being rigid about uniforms. As for the six Muslim girls, their parents and community elders can tell these girls that they are no less Muslim if they don’t wear the hijab inside the school and inside the classroom. The social practice in the Mangaluru region has been that some of the Muslim girls came in their hijab to the school and removed it once inside the school and before entering the classroom. Remember, this is a girls’ school. The Hindu communal elements in the school administration cannot insist that Muslim teachers, to whom the rule of the uniform does not apply, cannot wear the hijab as they see fit. The communal Muslim elements must recognise that the state government’s ban on the hijab which has now been upheld by the Karnataka high court is not a ban on the hijab in the country, but only in government schools where there is a prescribed uniform.