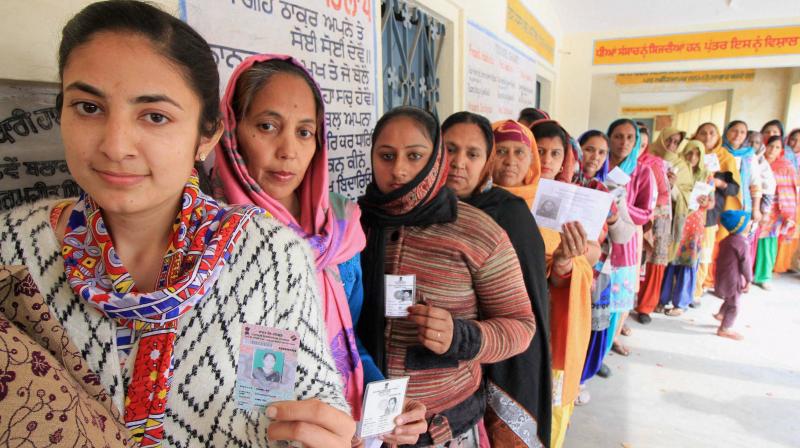 If the women voters of West Bengal and Tamil Nadu vote the way they have voted in the past, it would give an edge to these two parties in the respective states. (Representational Photo: PTI)

Of the many issues that may decide the fate of the West Bengal polls, one factor which may be critical in deciding if Mamata Banerjee is going to win her third election or there would be a change in West Bengal will be how women voters vote in that state. It is important to note that during the 2019 Lok Sabha polls, of the total 42 candidates, Ms Banerjee fielded 17 women candidates, and of the total 22 victories of the Trinamul Congress, nine women got elected to the Lok Sabha. In these constituencies, the TMC polled 48 per cent votes, compared to its state average vote share of 43 per cent. Even those women contestants who lost polled more than 35 per cent votes.

Evidence from the surveys conducted by the Centre for the Study of Developing Societies (CSDS) also indicates women voting for Ms Banerjee in very large numbers in West Bengal. In the current Assembly election, the Trinamul Congress has fielded 50 women candidates out of the total 294 seats, keeping an eye on the women’s vote. If the women vote for the TMC as they had voted for it in earlier elections, it could be advantage TMC, but a shift among women voters can put the TMC in a difficult situation.

In Tamil Nadu, this was true for the AIADMK as well when Jayalalithaa headed the party. One might think that the only explanation why women were voting for the TMC and AIADMK in large numbers was because these two political parties were headed by women leaders; but that may be too simplistic an explanation as the Bahujan Samaj Party in Uttar Pradesh and elsewhere could never get women’s support in such large numbers despite Mayawati heading the party. There must be other factors too that attracted women voters to these parties than just that they were led by women.

While the women’s vote hasn’t swung towards any other party as decisively as it has in favour of the TMC or AIADMK, Indian elections have seen a noticeable shift in the past decade. Women voters are turning out to vote in large numbers both in the Lok Sabha and Assembly elections. The local body elections, especially those to elect panchayats, have also seen a high turnout of women voters. Looking at this trend, discussion have begun on whether women have emerged as a new voting bloc for parties in India. It is true that women are voting in bigger numbers now compared to the past, but more important, there is also evidence of more women taking voting decisions on their own compared to the past. However, the voting pattern of women doesn’t suggest that, except for Tamil Nadu and West Bengal, women are emerging as a new social voting bloc in the rest of India.

There is clear evidence to suggest that more women are turning up at the polling booths than ever before. Data of the turnout across genders released by the Election Commission provides clear evidence for that. The men-women gap in turnout, that used to be around 9-10 per cent in the 1980s and 1990s, and much wider in the 1950s-60s, has not only narrowed down significantly, as seen in the 2014 and 2019 Lok Sabha polls; in many states, the number of women voters surpassed men, which is a big turnaround in Indian elections. In the 2014 Lok Sabha polls there were six states where women’s turnout was higher compared to men, and in the 2019 Lok Sabha polls the number of sates on this list increased to 16. The pattern of a rise in women’s turnout is not only visible in the Lok Sabha polls, it can be noticed even in the Assembly polls held in various states since 2014, including in the recent Assembly polls in Bihar in 2020, despite Bihar not being one of the states with a very positive gender gap in favour of women. It was also the first state to have witnessed this trend during the 2015 Assembly polls.

However, an increased turnout among women voters does not indicate that women are emerging as a vote bank in Indian elections, with their vote still divided between various political parties. Women voters tend not to vote en bloc like voters belonging to other social blocs often do, though some political parties do get more votes from women. A series of survey data collected during various Assembly polls in different states by Lokniti-CSDS suggests that the women’s vote has remained more or less equally divided between different parties in different states though with a few exceptions.

The data from these surveys indicates that women seem to vote more in favour of the BJP in states like Uttarakhand and the Jammu region of the erstwhile state of J&K, more in favour of the United Democratic Front in Kerala, for the AIADMK in Tamil Nadu and for Ms Banerjee’s TMC in West Bengal. While women’s turnout has risen in many Hindi heartland states, there is hardly any indication of their showing any preference or voting for any specific party.

If the women voters of West Bengal and Tamil Nadu vote the way they have voted in the past, it would give an edge to these two parties in the respective states. But one should not forget that there is no Jayalalithaa in Tamil Nadu now, and Ms Banerjee is up against a formidable BJP and is also facing a decade of anti-incumbency.