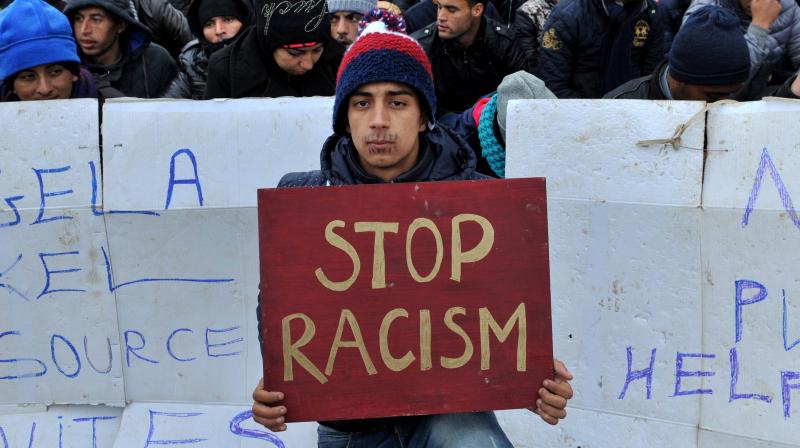 Indians who complain loudly and aggressively against the offensive behaviour of white people in the West fall into the same kind of behaviour at home when we deal with blacks and all non-white people – whether they are visitors or students. (Representational Photo: AFP)

External affairs minister S. Jaishankar was cornered as it were when the Opposition members in the Rajya Sabha, led paradoxically by the BJP’s Ashwini Vaishnav, raised the issue of Rashmi Samant, who was compelled to resign as president of the Oxford University Students Union after a big win, the first for an Indian, over the issue of some old tweets which were shown to be racist in content, especially because they made insensitive references to the Holocaust. But it would appear there was much more to it than the apparently offensive tweets, especially after she had apologised. There seems to have been some simmering resentment against the Indian student, and the suspicion became much stronger when a professor at the university made some references to her religion. British society has been trying for the past several decades to make itself over into a multiracial community, almost ever since the end of the Second World War, but it has not always been successful, despite several people of South Asian origin, including from India, having become the pillars of the establishment in the political and economic spheres. The leaders of the British establishment have of course been zealous about guarding the new identity of a more tolerant England. But the racism still simmers, and it creeps out in more ways than one.

The implosive interview of Meghan Markle, Duchess of Sussex, to American television superstar Oprah Winfrey, that referred to talk about the possible colour of her soon to be born child during her first pregnancy in royal circles, have raised eyebrows and hackles in Britain, including in the British royal family, which was reflected in the response that Queen Elizabeth II had given.

It’s true, of course, that racism is not the kind of sensitive issue in India that it is in Britain, in the United States and even in European Union countries. But that does not mean India, despite its much-vaunted diversity, does not harbour the canker of racism. Racism is so deeply ingrained in the Indian psyche that it is a most well-guarded dirty secret, that even the most aware people do not seem to notice when its ugly face comes up. Discrimination based on colour is a habit of the mind among people across the length and breadth of Indian society. The rich betray it, and so do the poor, the educated and the uneducated, the cultured and the not so cultured let it out instinctively. A person of fair skin is considered beautiful, and it needs a deliberate and conscious thought to acknowledge the beauty of a person of dark complexion. If this is not racism, what is? This cannot be wished away because it is lodged deep in our mind, collective as well as individual. And it cannot be removed with mere pious intentions. There is an urgent need to constantly remind ourselves that it is an unfair attitude, and most of the time it betrays not only a total lack of sensitivity but also a strand of cruelty.

It will be argued that the preference for, and admiration of, fairer coloured people does not have the violent and ugly consequences that it has in white-majority countries like Britain, the United States, and many EU countries, where people of colour find it harder to get jobs, make friends across the racial divide and get what they deserve. On face of it, it seems that despite our weakness for the fair colour -- various shades on light brown in the Indian context, we do not deny people opportunities. But the attitude remains offensive and hurtful.

There is a need for Indians to talk openly and loudly about our unconscious racial attitudes so that every time we unthinkingly make our racial judgment calls, we check ourselves. It is the adult biases that get passed on to children without either the adults or the children realising that a bad habit is being passed on from one generation to another. Most young people in India and elsewhere have been made aware of the need to protect the environment. Talk to any schoolgoing child, and he or she displays ecological sensitivity which has now become part of his or her mental makeup. We need a similar kind of education for us to consciously accept different racial and colour differences. In Europe, the colour bias is pronounced and aggressive. It is not so bad in India. We do accept each other from different parts of the country with different complexions. But this bonhomie and good-natured attitude seems to break down when we come across people from the northeastern states. And it becomes positively ugly when we deal with people from Africa, or when we deal with African Americans from the United States. Indians who complain loudly and aggressively against the offensive behaviour of white people in the West fall into the same kind of behaviour at home when we deal with blacks and all non-white people – whether they are visitors or students.

An interesting and revealing aspect of Indians’ behaviour hinges on what we generally do when faced with a person of European descent and another when we deal with a black person. While Indians, despite the resentment of racism practiced by whites, we unconsciously behave like a white person towards us or towards blacks. It is an education in self-awareness. What India needs to more is be aware of this race factor in our national life. It is only when we confront our own demons that we will be able to fight the menace of racism in other countries where we go to study, work or live.

We should be clear in our mind that racism is a universal evil. It is practised not just in India, in Europe and America. It lurks in the attitudes of the Chinese and the Japanese, and it is there among the blacks as well. Pigment of the skin is a natural tint. It should not become the basis of discrimination among human beings. We need to educate ourselves on the issue, and to talk about it openly and candidly. We can do it only when we stop believing that there is no racism in Indian society.