Congress needs a leader to give India a real choice 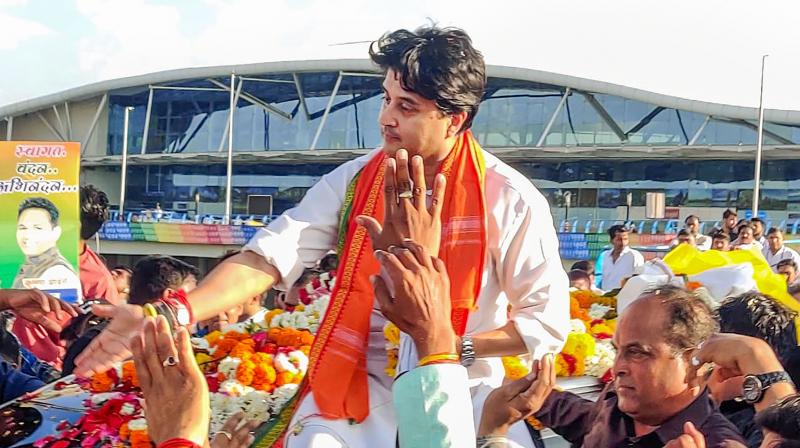 BJP leader Jyotiraditya Scindia being welcomed by his supporters on his arrival at Bhopal Airport on March 12, 2020. (PTI)

Jyotiraditya Scindia’s defection to the BJP was a business decision. Once he lost the Lok Sabha election in May last year to his secretary, who had joined the BJP, Scindia would have known he would be following suit to protect his investment in politics at the present juncture.

This is a straightforward transactional view of politics. The “taint” of ideology does not colour the consideration in such matters for those who insist on a bang for their buck, quite in contrast to the likes of a Mani Shankar Aiyar or a Shashi Tharoor, for instance, although these two individuals may be far apart in their worldview.

It remains to be seen if many in the Congress will emulate Scindia’s example. Their decision may be guided by the answer to the following questions: Can the BJP place them in a more advantageous position? How many more can be sent to the Rajya Sabha? How many can be made Union ministers? Are they so influential at the mass level that the BJP will be tempted?

Scindia is a maharaja, at least to his hangers-on. Even then, see how pathetic things got to be. Among the points of negotiation he successfully worked out with the BJP was apparently the assurance that in New Delhi he would be given the same government bungalow which was once allotted to his late father.

The scion of the erstwhile royal family of Gwalior was humoured in a matter so petty because he brought with him the promise of the destabilisation of a Congress government in a major state. How many potential deserters are in a position to set the wheels of “Operation Kamal” in motion?

This is a point worth pondering because in pro-Scindia circles the point has been sought to be made that the male heir of the Gwalior line has “belled the cat” in the Congress (whose enervated leadership appears to have developed severe cramps and currently seems incapable of performing even the most basic of functions expected of it). But isn’t this one hell of an inappropriate metaphor?

If Scindia were to have belled the cat, he would have shown the gumption to requisition a meeting of the Congress Working Committee by roping in like-minded individuals and pressing for a change in leadership. He did no such thing. He cut and ran, he plotted only to supplicate. He promised the BJP a state government, and in return all he wanted was a Rajya Sabha seat and a government job (and, yes, that bungalow). How long will such a maharaja be respected in the BJP is a minor point of speculation.

No solace for Congress

Nevertheless, it would be foolish of the Congress to draw solace from the unravelling of a supposedly high-worth individual. This party needs to introspect deeply, and be purposive in action at the same time. This is a tough ask. But it is a matter of survival.

The Congress was not without life even after its second crushing defeat in last year’s parliamentary elections. While there was enough to criticise it about, there was also enough in politics going for it — to begin with, the consolation-giving thought that the massive victory of its main opponent was in no small part a consequence of EVM-related skullduggery, or communal polarisation on account of Pulwama (which some still insist was stagemanaged) and the subsequent Balakot airstrike against Pakistan that mobilised the nation in the ruling party’s favour.

And then life seemed to ebb out of the Congress leadership. As party president, Rahul Gandhi had energised the mood in the party by putting up a terrific show in the Assembly elections in Gujarat, Karnataka, Rajasthan, Madhya Pradesh and Chhattisgarh. His critics within the party and outside it were silenced. The emphatic Lok Sabha defeat did not entirely change the scenario.

Gandhi did the honourable thing by resigning, taking constructive responsibility for the defeat. This raised his stock as no one thought a dynast would quit. The common belief is that they think they are entitled to occupy the top slot. The Congress leader’s problem was that he did not follow up on his resignation plan by ensuring an orderly change of guard. Worse, he mysteriously chose to isolate himself, exactly as the Congress’ opponents may have wanted.

In the post-Rahul resignation phase, the Congress performed with credit in Haryana and Maharastra, but the party’s central leadership can take little credit for this. The fight came from individuals at the state level who made their own choices, the most important of which was not to buckle. But this is not an automatic given in every situation, not in a state like Bihar, for one, with Assembly polls coming up and the Congress not being a key player.

The Congress today is a genuinely weakened entity on account of its leadership woes. It had fight in it before the Lok Sabha polls, and was not without verve even after the Lok Sabha defeat. Today there is some poignancy in the Congress’ tragic situation. This lies in the fact that the Narendra Modi government that it opposes appears genuinely stuck in a “chakravyuh” — a trap of its own making on the political battlefield. India’s economy, domestic politics, external relations are all badly stuck, but the so-called principal Opposition party can’t call the government’s bluff. It can’t mobilise people through sustained mass action. Comments laced with venom and clever tweets do not equal political activity.

There is no escaping at least a procedural Working Committee election and anointing a new full-time president or working president, no matter who, even if it will be Mr Gandhi all over again. And this particular Congress leader cannot take refuge in his statement that he won’t come around unless the party unites on his understanding of what the BJP is.

Let a leader come forward whose actions are such that unite the rank and file on the critical issues — starting with the economy. And the Congress ought to offer solutions that are a palpable alternative to the mess that has been created, and not be content with picking holes.