It is indeed interesting to note how the BJP cobbled up the magic figure of 31. 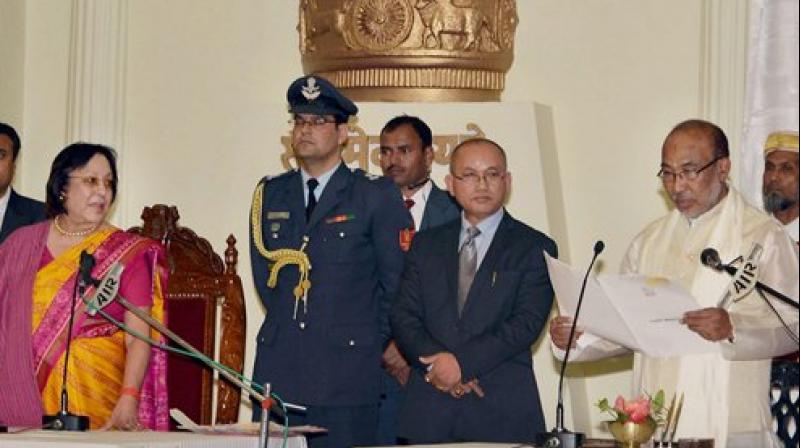 The just-concluded election to the 60-member Manipur Assembly has many firsts — it was the most bitterly fought polls in the state’s electoral history; for the first time, there had been a straight contest between two national parties, the Congress and the BJP; after many years, the electorate delivered a fractured verdict; and a Congress member (or a member from any other party for that matter) sided with the BJP even before taking the oath as an MLA, and then got inducted as a Cabinet minister, fully aware of the possibility of being disqualified under the anti-defection law!

There are other firsts as well — the most important being the installation of the first-ever BJP-led government in the troubled frontier state. It is indeed interesting to note how the BJP cobbled up the magic figure of 31.

With a vote share of over 36.3 per cent over the Congress’ 35 per cent, the BJP can claim to have won the popular vote. However, the BJP had won only 21 seats against the Congress’ 28. Two loose allies of the NDA came in handy — the Naga People’s Front (NPF) and the National People’s Party (NPP) — both of which won four seats each. Another NDA ally, the Lok Janshakti Party (LJP), won one seat. That brought the tally of the BJP and its allies to 30. There was an obvious tug-of-war between the BJP and the Congress for the lone Independent MLA Ashabuddin. He had almost come into the BJP fold, but could not make up his mind in time. Then, from the saffron party’s bag of surprises came Congress MLA Shyamkumar Singh, who joined the BJP delegation that went to Raj Bhavan to stake claim. The BJP suddenly had the numbers!

Like in Goa, the Congress in Manipur too was caught napping. It could have made a serious effort to garner the backing of the Trinamul Congress MLA as well as the lone Independent. That could have put the Congress and the BJP into a tie, making it a little difficult for the BJP to stitch up the alliance. Besides, the Congress failed to anticipate that one or more of its own MLAs, too could defect. That is history now. The BJP has been smart because the party knows that even if the Congress MLA, who has since been inducted into the ministry, is disqualified under the anti-defection law, the government would still have the numbers because the strength of the House would then come down from 60 to 59. And why on earth has Shyamkumar been made a minister? Well, his newfound status as a Cabinet minister will help when the constituency goes for a bypoll in the event of his disqualification, and he would then be the BJP candidate.

The BJP masterminds for Manipur — MP Ram Madhav and Assam minister Himanta Biswa Sarma — may have skillfully sewed up the numbers, but the new chief minister, N. Biren Singh, has a tough job in hand. First, he has to take his alliance partners along, and then he has to restore a semblance of order in the state, faced with an economic blockade by the agitated Nagas under the banner of the United Naga Council (UNC) since November 1 last year.  Mr Singh himself was lucky to have landed in the hot seat because two of his veteran party colleagues, former Union minister and BJP’s state unit president Chaoba Singh and another frontrunner Erabot Singh, had lost the polls. The choice fell on Biren Singh, who had joined the BJP from the Congress only in October last because he knows the minds of several possible fence-sitters within the Congress who could well switch sides anytime, taking the cue from Shyamkumar. This is actually part of the BJP’s advance planning for the Lok Sabha elections in 2019.

The fact that all the four NPP members figure in the nine-member ministry (along with the CM) that was sworn in on Wednesday, with the regional party’s Y. Joykumar being made deputy chief minister, indicates the hard bargaining done by the NPP. One of the NPF members, the lone LJP member and the Congress member who defected have also been made ministers. The chief minister aside, the BJP got just one berth as of now in the form of Biswajit Singh, who was also in the race for the top job.

Running the hotch- potch coalition will be as challenging for the chief minister as bringing in rays of hope among Manipur’s youth. The deep divide between the people in the Imphal valley and the hill districts is something the new government has to deal with.

Biren Singh is more than aware of that, and, therefore, the first thing he said after assuming office is that his government would adopt a “go to the hills’ policy in a bid to bring about equitable development in Manipur’s hills and the valley.

The Nagas in the hills of Manipur have been clamouring for autonomy and many feel they would like to merge with adjoining Nagaland as part of a deal with the National Socialist Council of Nagaland (Isak-Muivah group). The Meiteis in the valley, who are the dominant population in Manipur, are against any dismemberment of the state. This is at the root of the divide and frequent blockades of the road leading through Naga-dominated areas to Imphal, which is the link Manipur has to the rest of India.

Prime Minister Narendra Modi had categorically stated Manipur will not be divided, and that if the BJP wins, the four-month-long blockade would be lifted within 24 hours. As you read this, it is already more than 36 hours since Biren Singh became Manipur’s chief minister.