The government is now telling a lie -- that farmers will get a better deal outside the mandi, which is not the case over the long term 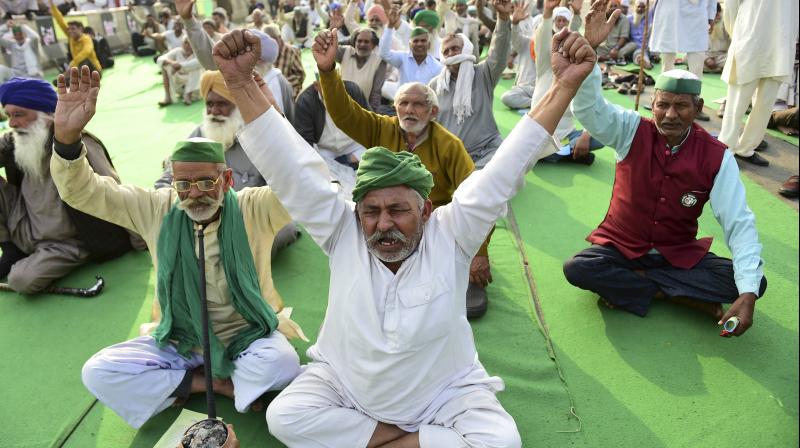 The honest way of going about this important issue dealing with the challenges of agriculture is to tell the truth that the government is unable to pay the rising MSP bill. (PTI/Kamal Kishore)

A good case is often lost by a bad lawyer. Prime Minister Narendra Modi and his government appear to be turning out to be the proverbial “bad lawyers” for the good case of farm reforms. Mr Modi’s arguments in the Rajya Sabha and Lok Sabha during his reply to the motion of thanks on the President’s address on February 9-10 ran themselves aground because of these bad arguments. He harped on the theme that the farm laws would emancipate the marginalised farmers because they can sell their produce to whomever they want. It is based on the premise that if they were to sell in the marketyard, or mandi, they would have to pay the mandi tax, while if they were to sell outside, they would escape the tax. And he said that since there would be many buyers -- this is the first time that buyers are referred to by this government -- the farmers would command a higher price. Mr Modi has tried to deflect the criticism that big corporates would dominate the open grain market.

But there are flaws in this argument. The small traders who are expected to flock to the farmers outside the mandis are unlikely to pay the higher price to small farmers. If anyone were to benefit from these transactions, at least when the price would be higher, it would be the big farmer. The big farmer would avert the mandi tax, and the better price would increase his profit margin. The margin for the smaller farmer would remain marginal.

Second, the small traders would bargain hard and they are more likely to beat down the price. The small farmer cannot hold on to his or her produce for too long. The Prime Minister calls the analysis of the future behaviour of the market as “futile speculation”. He does not seem to understand that future expectation is the basis of all commercial transactions.

And while creating an apparently tax-free parallel market to that of the mandis and a higher price for the produce, the government is really weakening the duty-shackled mandis and partly ridding itself of the obligation to buy grain at the MSP rates beyond the procurement limits of the Food Corporation of India. So, the assurances that mandis will continue to function and that the minimum support price (MSP) will continue appear so much like a deceptive election promise. Second, the trader who buys the grains at a high price would have to sell it to the consumer at a much higher price. In the year of a bumper crop, the natural slump in price would affect the farmer and it would be of benefit to the trader. And if the small traders are to be crowded out by big players because the big players can afford to buy at a marginally better price because they can make a much bigger profit on volumes.

The way out of this dead end for the small farmers is to grow cash crops like vegetables, flowers and cotton, where the prices that he or she would command may be an option. The other part of this shifting the crop pattern is to enter into contract farming, where the he or she would have to grow the crops as required by the contractor, who would sell the produce for far-off customers, and who would assure a guaranteed price for the small farmer. The government, through the new law, protects the farmer from being evicted from the land if there were to be some dispute between the farmer and the contractor. The contractor is indeed a new avatar of the old moneylender or the “Mahajan”, but who is more sophisticated because of his wider marketing network.

The Prime Minister’s other argument is that the size of the marginalised farmers is likely to reach 86 per cent if one were to include the farmers in hilly regions, from the 51 per cent in the 1971 agricultural census as cited by Prime Minister Charan Singh, and that they cannot sustain themselves. It is indeed an inconvertible fact the small farmers cannot sustain themselves and there is a need for innovative solutions. What the policymakers have in mind is to wean these small farmers away from their forever shrinking and unviable holdings to the cities and other sectors. This has been the plan of the government right from 2014 when Mr Modi and the BJP came to power. That is why they wanted to amend the Land Acquisition Act, which was introduced in the last days of the Manmohan Singh government. In the UPA version, the land acquisition law favoured the farmers who could refuse to alienate the land for a public purpose. The argument put forward by NDA’s first finance minister Arun Jaitley was that it was an unworkable law as anyone could raise any objection to thwart a project. But the main reason behind the amendment was that of then rural affairs minister M. Venkaiah Naidu -- that farmers want to give up farming because they find it unviable and therefore the law must help the farmers to move away from the agricultural sector.

The honest way of going about this important issue dealing with the challenges of agriculture is to tell the truth that the government is unable to pay the rising MSP bill, and that it would want the private corporates and merchants to take over the agricultural market. The government is now telling a lie -- that farmers will get a better deal outside the mandi, which is not the case over the long term. There are complications and uncertainties. Mr Modi and his advisers hate any kind of complexity and they want to believe in simplistic formulations.

Participating in the 2014 debate on the motion of thanks on the President’s address, BJP Lok Sabha member Rajiv Pratap Rudy said that the rural population must be shifted away from the land as a way of lifting the population out of poverty and cited the Chinese example in this context. It would be far better if Mr Modi and his colleagues simply accept that the issue is a difficult one and that there are no simple solutions.