Australia aflame: Doing nothing is consent for doom

The truth was leaked even before fellow Australian tourists in Hawaii had the chance to tweet selfies with a grinning prime minister. 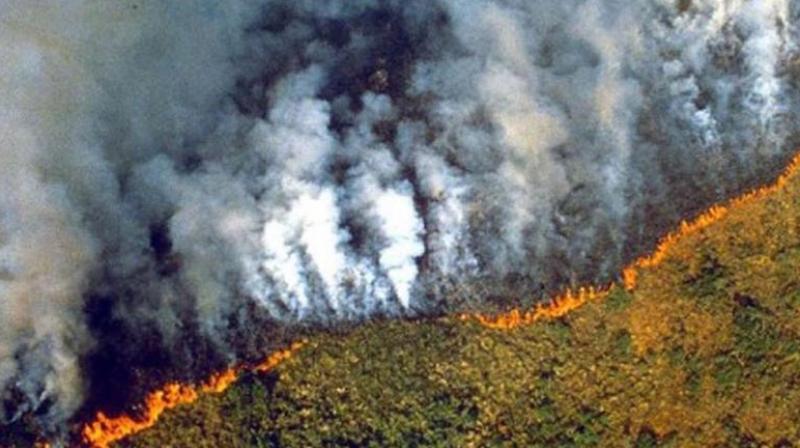 The vacation had to be cut short, but when Morrison visited a few of the devastated communities, many of the victims did not hesitate to convey their true feelings in chaste Aussie slang. T

If a picture is worth a thousand words, it was perhaps the indelible image of a scampering kangaroo silhouetted against a wall of fire on New Year’s Eve that seared the ongoing Australian bushfire tragedy on to the international consciousness. In fact, the driest continent on earth has been alight since September, the onset of spring in the southern hemisphere calendar. The fires have been spreading ever since. Millions of hectares have been reduced to ashes. Bushfires have regularly recurred across Australia for thousands of years. But the extent and intensity of the past five months’ seemingly unquenchable flames is unprecedented in living memory.

It is, or by now should be, common knowledge that climate change exacerbates natural disasters, in terms of frequency and ferocity. That scientific conclusion may be considered incontrovertible elsewhere but remains controversial in Australia. A couple of years ago, in his capacity as federal treasurer, Scott Morrison, infamously carried a black lump into parliament, where he declared: “This is coal. Don’t be afraid. Don’t be scared. It won’t hurt you.” Last month, in his capacity as prime minister, Morrison went on a holiday to Hawaii with his family, while the flames were getting higher in the country he is supposed to govern.

Everyone is entitled to a vacation, even if it’s poorly timed, but to leave behind instructions, as Morrison apparently did, that his location must not be revealed to the media or anyone else goes beyond the pale of the proverbial Aussie “fair go”. The truth was leaked even before fellow Australian tourists in Hawaii had the chance to tweet selfies with a grinning prime minister.

The vacation had to be cut short, but when Morrison visited a few of the devastated communities, many of the victims did not hesitate to convey their true feelings in chaste Aussie slang. The unfiltered comments were a reaction not so much to his tendency towards climate change denial as to his insouciance, which included avoiding a meeting requested for months by the heads of nationwide firefighting outfits, who wished to alert him to dangers they foresaw.

Perhaps chastened by the rebukes and dwindling poll numbers, a seemingly contrite Morrison has hinted at changing course and offered to hold a public inquiry. There is no evidence so far, however, of any intention to step up Australia’s thus far dismal response to the multiple challenges posed by climate change — not least because the conservative coalition the prime minister represents is peppered with denialists and those interested chiefly in preserving the privileges, profits and export potential of the fossil fuel industry.

Such attitudes are not restricted to Australia, of course. The Paris Agreement may have outlined wholly inadequate measures for restricting global warming, but it obviously doesn’t help when one of the world’s biggest polluters pulls out and its chief honcho begins dismantling already inadequate environmental constraints. Australia experienced its hottest year on record in 2019, but it wasn’t the only such country. Who has ever heard of artificial snow being deployed to impart a festive semblance to New Year festivities in Moscow, or of temperatures soaring into the mid-teens in Norway at the height of winter, or of glaciers around Mount Everest making way for greenery?

Even nations far more alive than Australia to the threats that lie ahead are falling far short of the drastic changes required to curb the consequences of global warming. The tipping point was probably reached long ago in the relentless march to hell on earth. Immediately adopting green new deals may help to restrain the fires next time — or, more likely, the time after that. But doing next to nothing is a green light for doom.